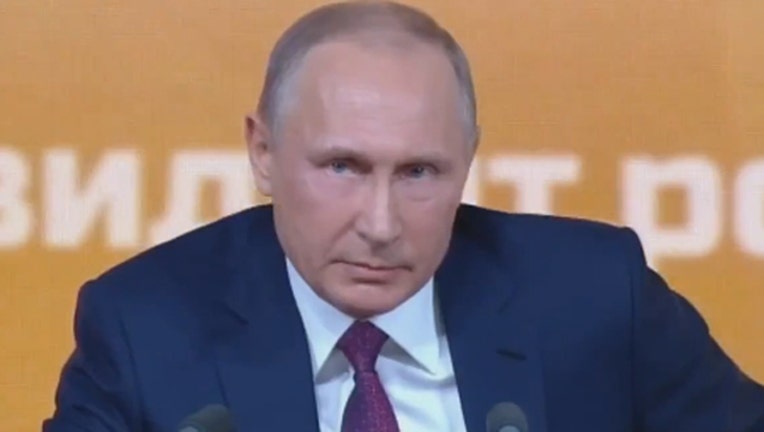 Seven Russian tycoons, including aluminum magnate Oleg Deripaska, were targeted, along with 17 officials and a dozen Russian companies, the Treasury Department said. Senior Trump administration officials cast it as part of a concerted, ongoing effort to push back on Putin, emphasizing that since Trump took office last year, the U.S. has punished 189 Russian-related people and entities with sanctions.

Rather than punishing Russia for one specific action, the new sanctions hit back at the Kremlin for its "ongoing and increasingly brazen pattern" of bad behavior, said the officials, who weren't authorized to comment by name and briefed reporters on condition of anonymity. They officials ticked through a list of complaints about Russian actions overseas, including its annexation of Crimea, backing of separatist rebels in eastern Ukraine, support for Syrian President Bashar Assad, and cyber-hacking.

Above all else, Russia's attempts to subvert Western democracy prompted the U.S. sanctions, officials said, in a direct nod to concerns that the U.S. president has failed to challenge Putin for alleged interference in the 2016 election that brought Trump to power.

To the dismay of Trump's critics and of Russia hawks, the president has continued to avoid directly criticizing Putin himself, and recently invited the Russian leader to meet with him, possibly at the White House. Yet in recent weeks Trump's administration has rolled out a series of actions - including several economic and diplomatic steps - to increase pressure on Putin and those presumed to benefit from his power.

"Nobody has been tougher on Russia than I have," Trump said at a news conference on Tuesday.

Deripaska, whose business conglomerate controls assets from agriculture to machinery, has been a prominent figure in special counsel Robert Mueller's Russia investigation over his ties to former Trump campaign chairman Paul Manafort. The Treasury said Deripaska was accused of illegal wiretaps, extortion, racketeering, money laundering and even death threats against business rivals.

On the London Stock Exchange, global depositary receipts of En+, an energy company majority-owned by Deripaska, dropped by 19 percent on news of the sanctions. Deripaska's conglomerate, Basic Element, said it regretted the sanctions and was analyzing it with its lawyers.

Those punished aren't necessarily involved in the Russian actions in Syria, Ukraine or elsewhere that have drawn consternation from the west. But officials said the goal was to put pressure on Putin by showing that those who have benefited financially from his position of power are fair game

"Russian oligarchs and elites who profit from this corrupt system will no longer be insulated from the consequences of their government's destabilizing activities," said Treasury Secretary Steven Mnuchin.

The target list includes some who are closely tied to Putin himself, including top-tier officials involved in Kremlin decision-making and heads of the top state-controlled business entities. Yet others on the list are far from the Kremlin's orbit, including some who long have fallen out of favor or hold technical positions.

-Kirill Shamalov, who is reportedly Putin's son-in-law, married to his daughter Katerina Tikhonova, although neither Putin nor the Kremlin have acknowledged that she is his daughter.

-Igor Rotenberg, the son of Arkady Rotenberg, a friend of Putin's friend since they were teenagers.

-Andrey Kostin, named among government officials, heads the nation's second-largest bank, VTB, which is controlled by the state.

-Alexei Miller, the longtime head of the state-controlled Gazprom natural gas giant. Both Miller and Kostin are longtime key members of Putin's team.

A state-owned arms-dealing company, accused by the U.S. of selling to Syrian President Bashar Assad, was also targeted, along with a subsidiary bank. Many other targets were associated with Russia's energy sector, including parts of state-owned Gazprom.

There was no formal reaction from the Kremlin. But Leonid Slutsky, who chairs the foreign relations committee in Russia's lower house of parliament, said there was "no sensible reasons or grounds" for the U.S. actions.

"This is an example of uncontrolled anti-Russian hysteria led by the U.S. and successfully exported to the European continent," Slutsky was quoted as saying by the Russian newswire Tass.

It was not clear whether any of those hit have significant holdings in the U.S. that could be seized, and if they did previously, they may have already moved their money elsewhere in anticipation of the sanctions. In January, lists of Russian officials and oligarchs were published by the State Department and Treasury. The lists, required under a law passed last year, were informally seen as lists of potential future sanctions targets, even though the public version of the oligarchs list was merely a reprint of Forbes' list of billionaires in Russia.

The new targets join a host of other U.S. steps to punish Russia for troubling activities overseas, including its alleged involvement in poisoning an ex-spy with a military-grade nerve agent in the U.K. In tandem with European allies, the Trump administration expelled dozens of Russian diplomats in response and shut down a Russian consulate in Seattle. And last month, the U.S. targeted 19 Russians and five Russian entities with sanctions in the first use of new sanctions powers Congress passed last year in response to the alleged election-meddling.