PHILADELPHIA - Democrat John Fetterman won Pennsylvania’s pivotal race for U.S. Senate, flipping a Republican-held seat as he recovered from a stroke during the bare-knuckled campaign and giving Democrats hope they can retain control of the closely divided chamber to boost President Joe Biden's agenda for two more years.

Fetterman, Pennsylvania’s towering and plainspoken lieutenant governor, who became a progressive hero as mayor of a downtrodden steel town, defeated Dr. Mehmet Oz, the smooth-talking and wealthy heart surgeon-turned-TV celebrity who had just moved to the presidential battleground state to run for Senate.

Dr. Oz called the newly-elected senator to concede the election at 9:30 a.m. Wednesday, nearly 14 hours after polls closed on Election Day, according to Fetterman's Director of Communications, Joe Calvello.

After news that Oz conceded broke, he released the following statement:

"This morning I called John Fetterman and congratulated him. I wish him and his family all the best, both personally and as our next United States Senator. Campaigning throughout our great Commonwealth was the honor of a lifetime, and I will cherish the memories and the people I met. Pennsylvanians showed up with passion and a vision for a bright future that I found inspiring every day. I want to thank my supporters, so many of whom worked tirelessly to spread our message and support me and my family.We are facing big problems as a country and we need everyone to put down their partisan swords and focus on getting the job done. With bold leadership that brings people together, we can create real change. As a Doctor, I always do my best to help others heal. That's why I ran for Senate. I hope we begin the healing process as a nation soon."

Fetterman credited his "every county, every vote" campaign strategy, in which the tattooed and hoodie-wearing candidate sought to bring the Democratic Party back to predominantly white working-class areas that have increasingly rejected it, even as he ran on a progressive platform.

"And that’s exactly what happened," Fetterman, 53, told a cheering crowd early Wednesday at a concert venue in Pittsburgh. "We jammed them up. We held the line. I never expected that we would turn these red counties blue, but we did what we needed to do and we had that conversation across every one of those counties."

Fetterman spent much of the campaign fending off attacks by Oz that questioned whether he was honest about the stroke's effects and was fit to serve.

He vowed to be the Democrats’ "51st vote" to pass foundational legislation to protect rights to abortion, health care, same-sex marriage, unions and voting, as well as to raise the minimum wage.

Fetterman has likened his May 13 stroke — which left him unable to speak fluidly and quickly process spoken conversation into meaning, a common effect called auditory processing disorder — to getting knocked down and adopted that as a campaign mission.

He ran for "anyone that ever got knocked down that got back up," he told the crowd. "This race is for the future of every community across Pennsylvania, for every small town or person that felt left behind, for every job that has been lost, for every factory that was ever closed and for every person that worked hard but never gets ahead."

Fetterman spoke smoothly early Wednesday but required closed captioning during media interviews and, two weeks ago, during the lone debate between the men. He turned in a rocky performance in which he struggled to complete sentences, jumbled words and fueled concern inside his party that it had doomed the race.

To underscore the importance of the race, Biden campaigned in Pennsylvania for Fetterman three times in the final three weeks, while former President Donald Trump came in, as well, to hold a rally for Oz, his endorsed candidate.

In brief remarks to his election night party crowd at a fitness center in suburban Philadelphia, Oz thanked supporters and exuded optimism.

"When all the ballots are counted, we believe we will win this race," Oz told the jubilant crowd late Tuesday. He had not conceded as of early Wednesday. 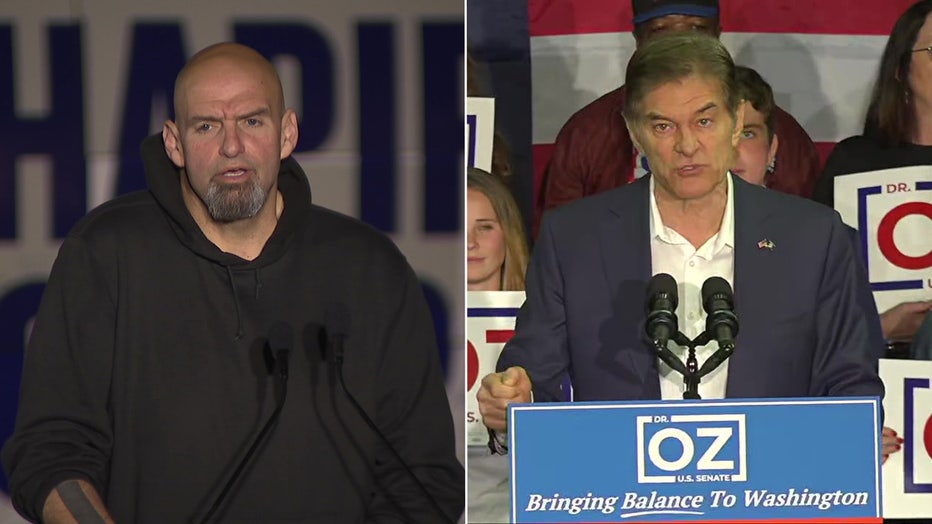 Oz carried heavy baggage, including having just moved from his mansion in New Jersey and barely winning a bruising primary in which opponents cast him as an out-of-touch Hollywood liberal.

Throughout, Oz — a political novice with no roots in Pennsylvania politics — struggled to connect with some Republican voters, including those who thought he was too close to Trump, too liberal or too inauthentic.

Fetterman sought to harness outrage over the Supreme Court’s abortion decision and promised to vote to abolish the filibuster.

Polls had shown a close race, with the economy and abortion rights weighing heavily on voters.

About half the state’s voters say the economy and jobs are the most important issue facing the country, according to AP VoteCast, an expansive survey of more than 3,100 voters in the state. Among that group of voters, Oz had a lead over Fetterman.

The Supreme Court’s decision to overturn Roe v. Wade also played a role in most voters’ decisions, with about 8 in 10 calling it a factor. About a quarter called it the single most important factor, with more of those voters casting a ballot for Fetterman.

Roughly half said they were confident Fetterman is healthy enough to serve effectively, and half said they had reservations, according to the survey.

More voters said they are not confident Oz is familiar enough with Pennsylvania to serve effectively as senator than those who expressed confidence, according to the poll.

Fetterman characterized a vote for Oz as a vote to outlaw abortion — ridiculing Oz’s comment during the debate that he wants "women, doctors, local political leaders" to decide the fate of abortion — and painted Oz as a soulless TV salesman who hawked useless health supplements for money and would say or do anything to get elected.

Fetterman was forced to explain away progressive stances to a swing-state electorate, including a flip-flop on natural gas drilling and pardons for state inmates convicted of murder.

Fetterman is irreverent, cusses casually on social media and looks more like an aging professional wrestler. At 6 feet 8, he is tattooed, goateed and glowering, with a clean-shaven head and casual dress that often involves shorts — even in winter.

Democrats came to see him as someone who might normalize the party with disillusioned voters in the age of Trump.

He revolutionized the use of social media in campaigns, bringing in a torrent of small-dollar donations and relentlessly trolling Oz ’s gaffes, wealth and status as a recent transplant.

Even with Trump’s endorsement, he won the primary by barely 900 votes in a contest that went to a statewide recount. Trump was a longtime friend and fellow entertainer whom Oz had come to know through New York City’s social and charity fundraising circles.

The election was the most expensive for a U.S. Senate seat in this campaign cycle, surpassing $300 million. Money from national groups poured in, and Oz spent more than $25 million of his own fortune on the race.

Much of the Republican money for TV ads dwelled on crime, suggesting Democrats have failed to protect people from violence and drugs and aiming to undercut one of Fetterman’s avenues of appeal to Black voters: his efforts as lieutenant governor to free the over-incarcerated, rehabilitated or innocent.

Fetterman, the former mayor for 13 years of tiny, impoverished Braddock, near Pittsburgh, used his time there to establish credentials with the Black community in the majority Black town, in fighting gun violence and to keep a hospital in the crime-wracked community.

He is tattooed with Braddock’s ZIP code — 15104 — on one forearm and, while he was mayor, the date of every slaying in the town as he worked to prevent crime.