A former suburban Houston police officer was executed Tuesday for hiring two people to kill his estranged wife nearly 30 years ago amid a contentious divorce and custody battle.

Robert Fratta, 65, received a lethal injection at the state penitentiary in Huntsville for the November 1994 fatal shooting of his wife, Farah. He was pronounced dead at 7:49 p.m.

Officials provide a full update after Robert Fratta was executed by lethal injection on Tuesday night in Huntsville.

Prosecutors say Robert Fratta organized the murder-for-hire plot in which a middleman, Joseph Prystash, hired the shooter, Howard Guidry. Farah Fratta, 33, was shot twice in the head in her home's garage in the Houston suburb of Atascocita. Robert Fratta, who was a public safety officer for Missouri City, had long claimed he was innocent. 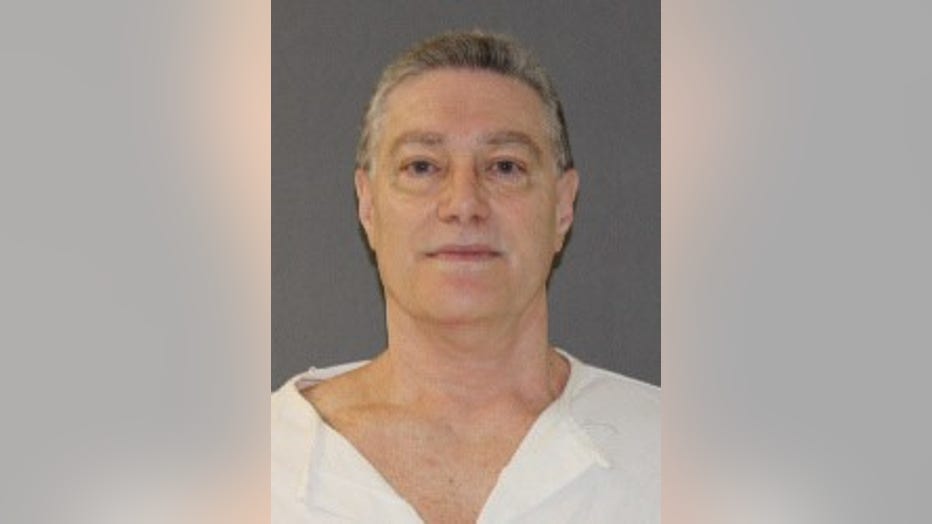 The U.S. Supreme Court on Tuesday declined an appeal from Fratta's lawyers to stop the execution. They had argued prosecutors withheld evidence that a trial witness had been hypnotized by investigators, leading her to change her initial recollection that she saw two men at the murder scene as well as a getaway driver.

"This would have undermined the State's case, which depended on just two men committing the act and depended on linking Fratta to both," Fratta's lawyers wrote in their appeal.

Prosecutors have argued the hypnosis produced no new information and no new identification. They had also said that Fratta had repeatedly expressed his desire to see his wife dead and asked several acquaintances if they knew anyone who would kill her, telling one friend, "I'll just kill her, and I'll do my time and when I get out, I'll have my kids," according to court records.

Prystash and Guidry were also sent to death row for the slaying.

Fratta was also one of four Texas death row inmates who sued to stop the state's prison system from using what they allege are expired and unsafe execution drugs.

There had been some doubt if Fratta's execution would take place after civil court Judge Catherine Mauzy in Austin earlier Tuesday issued a temporary injunction in the lawsuit that would have prevented the state's prison system from using what she believed is likely expired and medically compromised pentobarbital - the drug Texas uses in its lethal injection.

The execution was carried out after Texas' top criminal appeals court overturned the injunction and the state's supreme court rejected an appeal. Mauzy's order conflicted with last week's edict from the Texas Court of Criminal Appeals that barred her from issuing any orders in the lawsuit that would halt any execution.

The Supreme Court and lower courts previously rejected appeals from Fratta's lawyers that sought to review claims arguing insufficient evidence and faulty jury instructions were used to convict him. His attorneys have also unsuccessfully argued that a juror in his case was not impartial and that ballistics evidence didn't tie him to the murder weapon.

SUGGESTED: COLLEGE FOOTBALL PLAYOFF 2024: Houston is the next stop!

The Texas Board of Pardons and Paroles last week unanimously declined to commute Fratta's death sentence to a lesser penalty or to grant a 60-day reprieve.

Fratta was first sentenced to death in 1996, but his conviction was overturned by a federal judge who ruled that confessions from his co-conspirators shouldn't have been admitted into evidence. In the same ruling, the judge wrote that "trial evidence showed Fratta to be egotistical, misogynistic, and vile, with a callous desire to kill his wife."

He was retried and resentenced to death in 2009.

Andy Kahan, the director of victim services and advocacy for Crime Stoppers of Houston, said that Farah Fratta's father, Lex Baquer, who died in 2018, raised Robert and Farah Fratta's three children with his wife. He said ahead of the execution that he hoped it would be a way for them "to continue to move on with their lives and at the very least they won't have to think about him anymore. I think that will play an important part in their healing."

Fratta was the first inmate put to death this year in Texas and the second in the U.S. Eight other executions are scheduled in Texas for later this year.