U.S. Sen. John Cornyn visits Dallas to discuss success of the Save Our Stages Act

U.S. Senator John Cornyn (R-Texas) was in Dallas on Thursday to discuss the success of the Save Our Stages Act, which he sponsored to support music venues and other live event operators.

DALLAS - U.S. Senator John Cornyn (R-Texas) was in Dallas on Thursday to discuss the success of the Save Our Stages Act, which he sponsored to support music venues and other live event operators.

Sen. Cornyn took part in a roundtable discussion with venue owners, artists, and entertainment staff to hear about how the pandemic affected the Dallas live music scene and entertainment industry and discuss how the Save Our Stages Act funding has helped.

The senator also talked about the states’ controversial abortion law and the exit from Afghanistan.

Cornyn was in the Bishop Arts neighborhood of Dallas Thursday meeting folks who have benefited from the Save Our Stages Act, a bipartisan bill he co-authored at the height of the COVID pandemic that is now law. 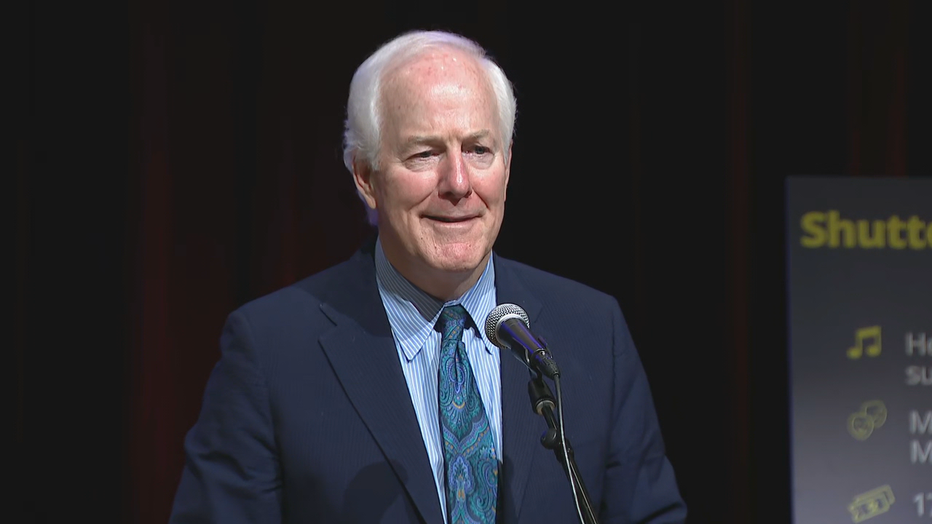 The Kessler Theater is one of 170 different music and entertainment venues in North Texas that has received some $245 million in grant money.

Recipients can use the grants for essential expenses incurred as a result of the pandemic.

"Back in April, we hired back our whole staff, which is amazing that these guys stayed with us," said Kessler Theater owner Edwin Cabaniss.

The funds allow venue owners to pay contractors a big boost to struggling musicians left without work for months.

"The story about watching $2,500 of gigs drop off my calendar in hours, it was terrifying," said Kirk Thurmond, a local musician.

The senator's event came shortly before the U.S. Justice Department announced its lawsuit against Senate Bill 8, the Texas abortion law.

"I am unapologetically pro-life," he said. "In these cases, I believe you're dealing with more than just one person."

Cornyn believes the U.S Supreme Court will soon have the ultimate say on a case involving another state.

"The truth is the Texas law that was passed will likely be decided on a case the Supreme Court has already agreed to hear out of Mississippi, which seeks to give a woman up to 15 weeks to get an abortion," he said. "That will probably be the case that will dispose not just of the Mississippi case but the Texas case."

Sen. Cornyn also talked about the situation in Afghanistan.

"The unplanned for and chaotic exit President Biden ordered out of Afghanistan without talking to our friends and allies in NATO and around the world," he said. "People are left to wonder if the U.S. is a reliable partner for security."

Sen. Cornyn says it’s important to honor the lives of the U.S. military troops who died in Afghanistan when the nation reflects on the twentieth anniversary of 9-11, which is this Saturday.