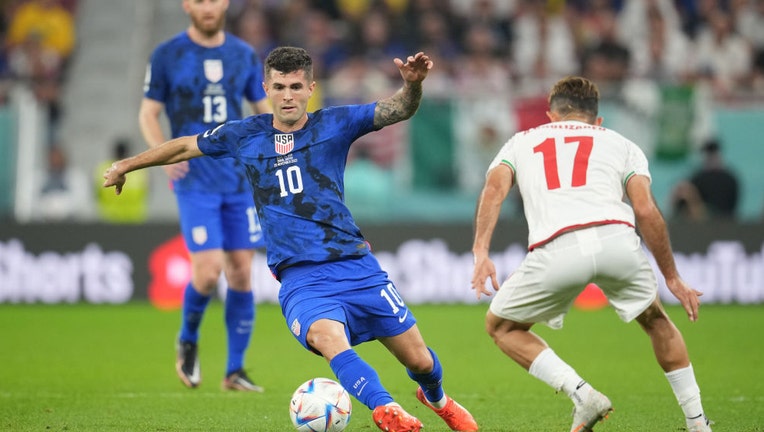 Christian Pulisic #10 of the United States is marked by Ali Gholizadeh #17 of Iran during a FIFA World Cup Qatar 2022 Group B match between Iran and USMNT on November 29, 2022 in Doha, Qatar. (Brad Smith/ISI Photos/Getty Images)

Everything was riding on Tuesday's win-or-go-home match for the U.S. men's national team against Iran. The biggest moment, arguably, in the history of this program. After failing to qualify for the last World Cup, it was all building toward this moment.

So, it was fitting when Christian Pulisic — who has been nicknamed "Captain America" and starred in all the World Cup commercials and been the talisman for this historically young squad — scored a sensational goal to deliver the USMNT a 1-0 victory over Iran and clinch a spot in the round of 16.

The U.S. came out hot in the attack to start the match, and there was an overwhelming sense that a goal was coming in front of a rowdy, pro-Iranian crowd. The breakthrough came in the 38th minute when left back Jedi Robinson ran a ball down on the left wing deep into Team Melli territory, passed it back to captain Tyler Adams, who played it to Weston McKennie near the top of the penalty box.

The U.S. midfielder saw Sergiño Dest streaking down the right side and chipped a perfect ball into the box that the fullback headed across the middle to Pulisic, who crashed the far post and scored on a half-volley with the inside of his right foot.

"How many goals like that has he scored in his career?" Adams said, grinning. "I mean, back post, he's brilliant in the way that his timing is into the box. And to get in front of that ball, you know, he'll do anything for this team in order for us to win.

Pulisic, just 24 years old, was courageous, gutsy, brave and literally put his body on the line to score his first World Cup goal.

As Al Thumama Stadium erupted and the U.S. players celebrated, Pulisic remained on the ground inside the goal. He had collided with Iranian goalkeeper Alireza Beiranvand and needed assistance. His teammates quickly motioned for the staff to rush onto the field and for a couple of nervy minutes, Pulisic was unable to stand up straight and leaned on team trainers to help him walk.

Later on the sideline, he tried jogging, then clung to the trainers again for support. Eventually he took a swig of water, ran to midfield and finished out the first half.

The American winger was clearly in pain when he came back on the field, however, grimacing and resting his hands on his knees, doubled over. Pulisic did not return in the second half and was substituted for Brenden Aaronson.

Pulisic was later taken to the hospital for scans on his abdomen, and U.S. Soccer announced a couple hours after the match that Pulisic had been diagnosed with a pelvic contusion. His status is listed as day-to-day.

The USMNT faces the Netherlands on Saturday (10 a.m. ET on FOX and the FOX Sports App) in the knockout round. Will Pulisic be able to play?

McKennie told reporters after the game that he sent his longtime teammate and friend a text to check in and Pulisic responded, "Best believe I'll be ready on Saturday."

While the injury wasn't part of the plan, Pulisic has been waiting for and dreaming of this moment his entire life. Especially since that fateful night in October 2017 when the USMNT was stunned in a 2-1 loss to Trinidad and Tobago that eliminated them from qualifying for the 2018 World Cup. Pulisic, then a 19-year-old rising star, scored the Americans' lone goal to give his team hope. That moment has motivated and shaped the last four years of his life and career.

Pulisic came into this World Cup feeling all the pressure of needing to perform and be the star America wants and hopes him to be.

His résumé – which includes playing for Chelsea in the Premier League and being the first USMNT player to appear in and win the UEFA Champions League Final — was ripe for an addition anyway. Pulisic had the terrific assist on Tim Weah's goal in the first match against Wales, but in order to advance, the U.S. needed something more from him.

Sacrificing his body would do.

"Christian makes those runs, like that's what he does, that's the special quality he has," coach Gregg Berhalter said. "As soon as the ball is wide, he goes in with intensity into the penalty box, and good things happen, and you score goals.

"We've seen at Chelsea him score a number of goals on the same type of runs. He crashes the box and makes it really difficult for defenders with his change of pace."

Berhalter told his team before the match that this is exactly how the U.S. would score. They had worked on the same type of play during the England match in which the team shifts to one side, forcing the opponent to do the same, leaving an opportunity open on the weak side. McKennie played the right ball, Dest timed his run well, headed it across the goalmouth, and Pulisic anticipated the ball's location and finished it in the back of the net.

The USMNT FaceTimed their conquering hero in the locker room after the game since he couldn't be there to jump around and celebrate alongside them. Berhalter said Pulisic was in good spirits, which was evident in the flurry of social media posts that followed in the waning hours.

Pulisic actually finished up at the hospital and beat his teammates back to their hotel just in time to surprise, greet and film them walking into the lobby. The genuine smile on his face was a classic representation of the tight knit brotherhood this team raves about.

Weah walked in first, saw Pulisic, and gave him a bear hug. DeAndre Yedlin gave him one, too. Kellyn Acosta commented on one of Pulisic's Instagram posts, "You dropped this [crown emoji]."

The White House posted a video of President Biden announcing to a crowd in Bay City, Michigan, that "The United States beat Iran 1-0. Game's over! … Anyway, just thought you might want to hear."

Pulisic has spoken to the media several times in Qatar, but it's his teammates and coaches who have commented on how locked in and laser focused he has been since the team's arrival a few weeks ago.

Before the group took the field Tuesday night, Pulisic had a smile on his face in the tunnel and during the national anthem. Who knew it would be a telling detail for what was to come? A legacy defining moment, like U.S. legends Landon Donovan and Clint Dempsey did before him.

As McKennie rightfully noted, any one of the 26 players on this roster would "be willing to lay their body on the line to make sure this team is successful."

Hang around this team for even just a day, and it's obvious that is the case.

But in this particular match, it was Pulisic who put everything on the line and now the U.S. gets to extend their stay in Doha a little longer.

"He left everything out there," goalkeeper Matt Turner said. "That's the kind of guy he is."

LINK: Get the latest updates on this story at FOXSports.com.

Read more from the World Cup: