TxDOT gives recommendation on what to do with I-345

After years of debate over how an aging interstate in Downtown Dallas should be rebuilt, TxDOT has finally released its recommendation.

DALLAS - After years of debate over how an aging interstate in Downtown Dallas should be rebuilt, TxDOT has finally released its recommendation.

The plan would put the now elevated interstate in a trench, creating room for deck parks and current streets to run on top of it.

"We think what we have really captures what the public has asked for, which is reconnection of streets, keeping corridor going so traffic doesn't have to find alternate routes," TxDOT spokeswoman Kenna Mitchell said.

A simulated flyover of Interstate 345 shows TxDOT’s vision for how to rebuild the now elevated freeway that is nearing the end of its lifespan.

I-345 would begin being elevated as it connects from I-45 and I-30, going north. It would then dip below street level, allowing the city's grid to remain intact.

"Providing that opportunity for more space, to have the sidewalks up above, the potential green spaces," Mitchell added.

Going past Carpenter Park, the interstate would no longer divide downtown and Deep Ellum with a shadow.

The interstate would lift up as it connects with Woodall Rodgers.

But the plan does come with a large price tag for the freeway that is less than a mile and a half long.

"There is cost with this. Right now, just preliminary estimates are about a billion dollars," Mitchell said. "[Funding sources] are still to be determined at this point." 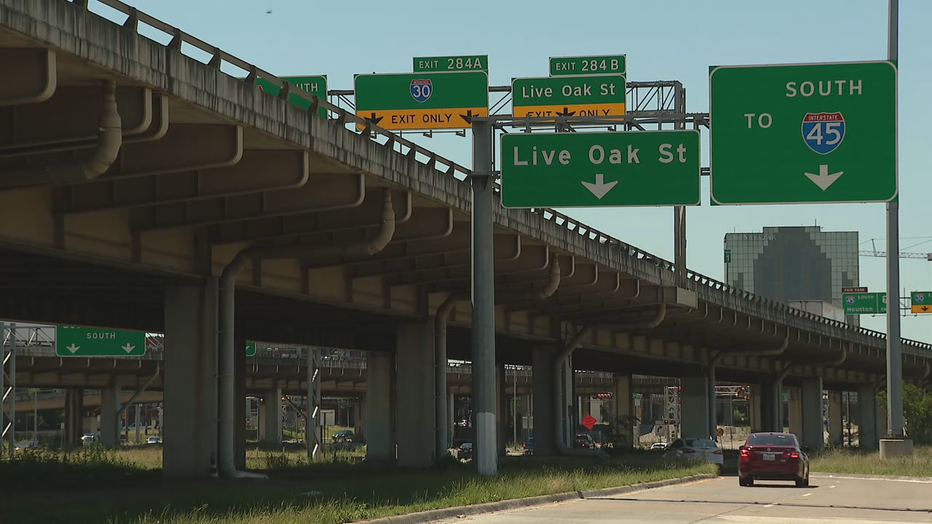 If the community supports the proposal, that could help secure the funding from various sources.

Private foundations or the city of Dallas would have to put up the money for deck parks, similar to Klyde Warren Park downtown, or the Southern Gateway near the zoo.

"If this project does move forward, it’s about eight acres total that could be opened up to that potential development at what would be the city level, the street system. So certainly that does present a lot of opportunities," Mitchell explained.

TxDOT is accepting public comment on the proposal until June 27.

RELATED: Should I-345 in Dallas be torn down? TxDOT wants input

Engineers will be on hand to answer questions at the Sheraton Downtown on Thursday from 3 p.m. to 6:30 p.m.