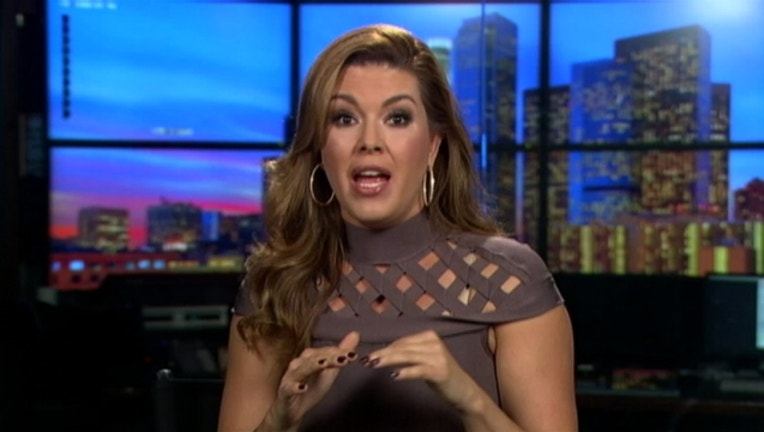 GRAND RAPIDS, Mich. (AP) — Donald Trump shamed a former beauty pageant winner Friday for her sexual history and encouraged presidential voters to check out what he called her "sex tape," in an early-morning tweet-storm that dragged him further away from his campaign's efforts to broaden his appeal to women.

A day after he injected former President Bill Clinton's infidelities into the campaign, Trump accused Hillary Clinton's campaign of helping 1996 Miss Universe winner Alicia Machado get U.S. citizenship, but offered no proof. He said Machado had a "terrible" past that a "duped" Clinton had overlooked before holding her up "as an 'angel" in the first presidential debate.

"Did Crooked Hillary help disgusting (check out sex tape and past) Alicia M become a U.S. citizen so she could use her in the debate?" read a missive from Trump posted on his verified Twitter account at 5:30 a.m.

"This is ... unhinged. Even for Trump," Clinton retorted in a tweet of her own. And Machado took to her Facebook page to say Trump's tweets were part of a pattern of "demoralizing women."

"These attacks are cheap lies with bad intentions," Machado said.

But Trump appeared undaunted, even as his broadside against Machado ricocheted across the campaign, and Democrats seized it to criticize him all the more. His campaign described the hullabaloo as evidence of collusion between biased news outlets and Clinton's campaign, calling it "the single biggest coordinated media attack in history."

And nearly 12 hours after he shook up Twitter pre-dawn, Trump returned with a new tweet invoking Clinton's famous ad from her 2008 campaign portraying her as the best candidate to pick up an urgent call at the White House at 3 a.m.

"For those few people knocking me for tweeting at three o'clock in the morning, at least you know I will be there, awake, to answer the call!" Trump wrote.

Machado, the Venezuela-born actress, has been center stage in the campaign since Clinton noted in Monday's debate that Trump had mocked her publicly for gaining weight after she won Miss Universe, a pageant then owned by the businessman. If that was a trap laid by Clinton, the irrepressible Trump dug himself deeper the next day by saying Machado's "massive" weight gain had been "a real problem."

His latest taunt appeared to refer to footage from a Spanish reality show in 2005 in which Machado was a contestant and appeared on camera in bed with a male contestant. The images are grainy and do not include nudity, though Machado later acknowledged in the Hispanic media that she was having sex in the video.

Clinton's campaign has released videos featuring Machado and has arranged for reporters to interview her in an effort to use Trump's comments against him just as early voting in critical states gets underway. Her spokesman said she called Machado Friday to thank her for her courage.

Clinton didn't mention the dust-up midday as she campaigned in Florida, but in her initial reaction Twitter, she asked what kind of a man "stays up all night to smear a woman with lies and conspiracy theories?"

"When something gets under Donald's thin skin, he lashes out and can't let go," Clinton said. "This is dangerous for a president."

Shaming Machado over intimate details from her past could be particularly risky as Trump tries to win over more female voters, many of whom are turned away by such personal attacks. It also risks calling further attention to the thrice-married Trump's own history with women.

On Friday, Trump suggested Clinton had helped Machado gain citizenship. Indeed, Clinton's campaign has highlighted Machado's status as a new American and her plans to cast her first vote for Clinton. But spokeswoman Jennifer Palmieri said Clinton did not help Machado get U.S. citizenship.

The flurry on Twitter began shortly after 3 a.m. on the East Coast when Trump complained about stories about his campaign based on anonymous sources and told his supporters not to believe them.

"There are no sources, they are just made up lies!" he wrote.

Trump has repeatedly gotten himself in trouble with his late-night and early-morning tweets, which appear to be written by the candidate himself. Trump has, at various points during his campaign, toned down the content, but rarely for long.

His Republican allies have implored him to stick to attacks on Clinton over her family foundation, her emails or her long history as a political insider, critiques that fall further out of view whenever he sparks a new controversy.

The vendetta against Machado adds fuel to a burgeoning debate in America about putting down women over the perception of promiscuity. Women's advocates have said the phenomenon, which takes place largely online, holds women to a different standard because men are often praised for having multiple partners.

A day earlier, as Trump tried to bounce back from his widely panned debate performance, he warned voters that a Clinton victory would bring her husband's sex scandal back to the White House. The fresh rehash of the 1990s Monica Lewisnky scandal came despite Trump's insistence that he's been courageously restrained by not bringing it up.