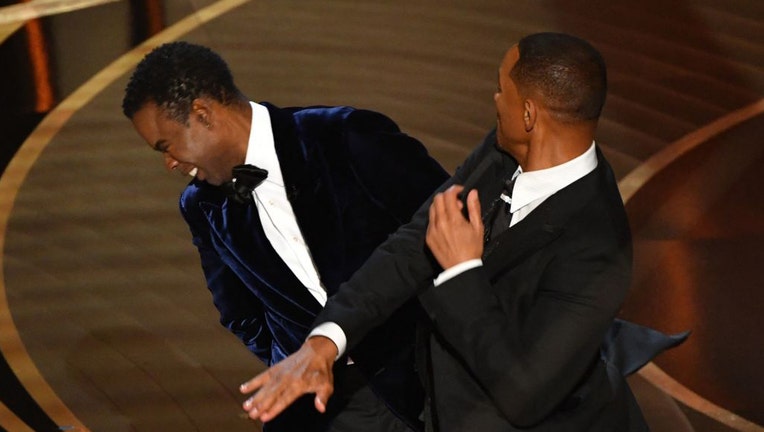 Actor Will Smith (R) slaps US actor Chris Rock onstage during the 94th Oscars at the Dolby Theatre in Hollywood, California on March 27, 2022. (Photo by ROBYN BECK/AFP via Getty Images)

NEW YORK - In a year marked by unexpected winners and losers, television was keeping tabs.

A Hollywood star tarnished his image and that of the Oscars. A battered country stood up to an invader, again and again. The Jan. 6 insurrection became an unexpectedly watchable TV docudrama. A monarch was celebrated and mourned. Television entertainment had its usual highs and lows.

Here are some of 2022's defining TV moments from the perspective of The Associated Press' television and media writers.

The Oscars are Hollywood’s biggest platform and Will Smith, one of its biggest stars, was expected to reign with a best-actor award for the tennis dad biopic "King Richard." But Smith lost while winning. Angered by a joke that presenter Chris Rock made at the expense of wife Jada Pinkett Smith, he strode onstage and slapped Rock, hard, drawing gasps from the TV and theater audience.

RELATED: Will Smith apologizes to Chris Rock for Oscars slap in new video: 'My behavior was unacceptable'

A tearful Smith made excuses during his acceptance speech that March night and issued subsequent apologies. The film academy penalized him, but the Oscar prospects of his upcoming movie, "Emancipation," are being debated.

Frankly, expectations were low when the House committee investigating the Jan. 6, 2021 Capitol insurrection scheduled public hearings. Congressional hearings tend to produce more heat than light, as preening politicians compete for sound bites to impress their supporters. But with only two Republicans on the committee — both of them appalled by what happened at the Capitol — the committee put on sharp, tightly-focused presentations, aided by a former ABC News producer. All made for compelling viewing, but none more than the live testimony of former White House aide Cassidy Hutchinson, who calmly described what was happening in the Trump administration as events spiraled out of control.

Last year, Britney Spears' bid to end her conservatorship was the mesmerizing celebrity legal battle. This year, the courtroom crossfire between Johnny Depp and Amber Heard — all playing out on TV — was the main attraction. Their defamation suits put the two actors in the kind of harsh, unflattering light barred from any Hollywood set. As the exes traded allegations of assault and substance abuse, the trial became increasingly sad, seamy and inescapable.

The jury's June verdict largely favored Depp. Heard might not be the only loser, experts warned: the spectacle and its outcome could have a chilling effect on women who might press abuse claims.

The images of war are always awful, and Russia's invasion of Ukraine produced many of them. Yet the many moments of bravery shown by the Ukrainian people and their leader, President Volodymyr Zelenskyy, changed the perception of a conflict many feared would be an ugly rout, and rallied the world to their side.

RELATED: Barrage of Russian strikes hit Ukrainian cities, most of Kyiv without water

Pick your moments — a woman who offered sunflower seeds to a Russian soldier so they can sprout from his pants pocket where his body falls, the defiantly profane response from Ukrainians stationed on a remote island when Russians told them to surrender, Zelenskyy's media-savvy campaign for support. It was the stuff of heroes.

Those who find Disney's ever-expanding "Star Wars" universe is leaving them cold may have warmed up after the season finale of "Obi-Wan Kenobi." The epic, roughly four-minute lightsaber battle between Obi-Wan (Ewan McGregor) and former apprentice Anakin Skywalker aka Darth Vadar (Hayden Christensen) was a fierce back-and-forth with, of course, good and evil hanging in the balance. But it was the unmasking of Vadar that sent Disney+ viewers into a stratospheric tizzy, his scarred face and psyche revealing a man beyond redemption.

When 12.1 million people tuned in on Nov. 13 to watch the season premiere of Kevin Costner's "Yellowstone" on the otherwise invisible Paramount and some sister cable networks, it was the most-watched scripted show of the new television season. The Western is the definition of a broadly popular show, yet wasn't on a broadcast network, which were conceived on the idea of reaching as many people as possible. You could call that a failure of imagination that typifies the decline of the networks, but the truth was they never really had a shot at "Yellowstone," which was initially developed at HBO but went nowhere there. For every television success, there are people kicking themselves because they didn't see it coming.

Queen Elizabeth wasn’t America’s monarch, but her death in September at age 96 hit home and drew blanket coverage in the former British colony. Maybe it was "The Crown," maybe it was her conspiratorial smile when she shared tea and secrets with Paddington Bear. Her dedication to service and a stately funeral procession with echoes of history certainly merited attention.But the catnip for TV came when brothers William and Harry and wives Kate and Meghan, any tensions publicly masked, joined to greet mourners. Princess Anne provided a memorable grace note: A deep curtsy as her mother’s coffin was carried by her.

When "The Walking Dead" aired its final episode on Nov. 20, it was the end of an era for the quintessential punch-above-your-weight AMC cable network. How much that was the case became clear less than two weeks later, when company chairman James Dolan sent a memo to staff saying CEO Christina Spade was out after three months and large-scale layoffs were coming. AMC is hardly the only media company, or cable network, that is hurting.

"We are primarily a content company and the mechanisms for the monetization of content are in disarray," Dolan said. Shed a tear for the boutique network that gave us "Mad Men," "Breaking Bad" and "Better Call Saul," and cable networks in general.

With memories of the 2020 election chaos fresh, news organizations prepared for a midterm election night where democracy itself could be in peril. Only... it wasn't. Certainly, there were close elections and control of Congress wasn't clear for several days. While there were a few exceptions, the election ran smoothly and most candidates accepted the results. And the story became those results: an unexpectedly strong showing for Democrats that defied history and expectations.