NEW YORK - Former President Donald Trump was questioned under oath Wednesday in the New York attorney general’s long-running civil investigation into his dealings as a real estate mogul, but he says he declined to answer any of them.

In a statement released on his social media platform, Trump stated: "I declined to answer the questions under the rights and privileges afforded to every citizen under the United States Constitution."

In his statement, Trump also said: "I once asked, 'If you're innocent, why are you taking the Fifth Amendment?' Now I know the answer to that question. When your family, your company, and all the people in your orbit have become the targets of an unfounded politically motivated Witch Hunt supported by lawyers, prosecutors, and the Fake News Media, you have no choice."

The former president refused to answer questions at a deposition by the New York Attorney General on Wednesday.

Trump was at the Manhattan office of Attorney General Letitia James on Wednesday for about six hours. His motorcade was seen leaving just before 3:30 p.m.

The questioning took place just days after FBI agents searched his Mar-a-Lago estate in Florida as part of an unrelated federal probe into whether he took classified records when he left the White House.

Trump spent Tuesday night in Trump Tower in Midtown Manhattan ahead of the meeting. He was seen leaving the building on Wednesday morning and arrived at the Attorney General's office a short time later. 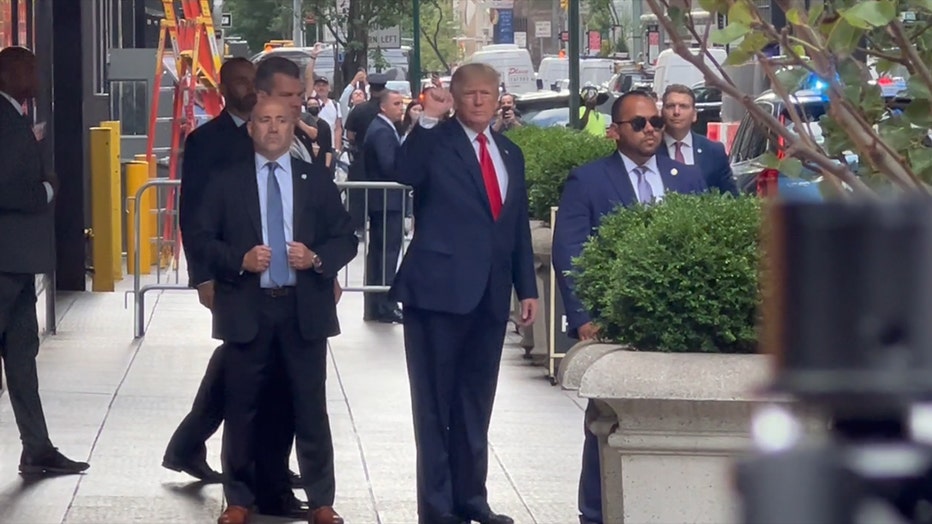 President Trump gestures to the crowd as he leaves Trump Tower in Manhattan on Aug. 10, 2022. (FOX5NY)

In May, James' office said that it was nearing the end of its probe and that investigators had amassed substantial evidence that could support legal action, such as a lawsuit, against Trump, his company or both.

Trump’s deposition was one of the few remaining missing pieces, the attorney general’s office said.

Two of Trump’s children, Donald Jr. and Ivanka, testified in the investigation in recent days, two people familiar with the matter said. The people were not authorized to speak publicly and did so on condition of anonymity.

The Trumps’ testimony had initially been planned for last month but was delayed after the July 14 death of the former president’s ex-wife, Ivana Trump, the mother of Ivanka, Donald Jr. and another son, Eric Trump, who sat for a deposition in James’ investigation in 2020.