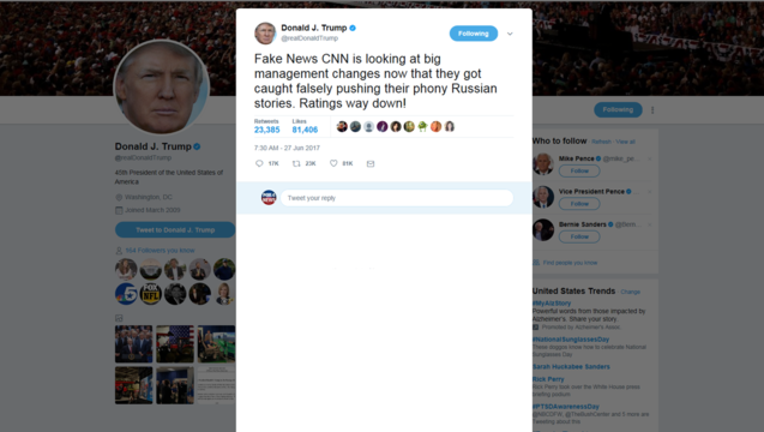 NEW YORK - For a president seemingly at perpetual war with "fake news," the resignation of three CNN journalists over a retracted story about a Donald Trump Russian connection is a gift from the political gods at a time the struggling effort to repeal Obamacare dominates the headlines.

Trump quickly took advantage with a series of tweets on Tuesday, and conservative provocateur James O'Keefe piled on by releasing a video with a CNN producer caught on camera talking about the network's Russian coverage being ratings-driven.

The network on Monday accepted the resignations of journalists Thomas Frank, Eric Lichtblau and Lex Haris over last week's web story about Trump aide Anthony Scaramucci's pre-inaugural meeting with the head of a Russian investment fund. CNN retracted the story a day later, saying it had not met its standards, and apologized to Scaramucci.

Trump has been unhappy with CNN since he was a candidate last year, and hasn't granted the network an interview since he's been president. He's been particularly annoyed by its reporting on connections with Russia. The misstep on a relatively minor story - it was never mentioned on any of CNN's television networks - left some White House staff members jubilant, believing it has handed them a new talking point to use as a cudgel against mainstream media organizations they feel are largely biased against them.

Trump tweeted that "they caught Fake News CNN cold." He lumped ABC, CBS, NBC, The New York Times and The Washington Post together in the same "fake news" category. He said that "CNN is looking at big management changes now that they got caught falsely pushing their phony Russian stories. Ratings way down!"

A spokeswoman for CNN chief Jeff Zucker didn't immediately respond to a request for comment on Tuesday. CNN's public relations staff refuted Trump's notion that the network is hurting, saying it is completing the most-watched second quarter in the network's history.

The president was livid at CNN's story but also felt vindicated because it seemed to confirm his belief that the cable network was trying to undermine his presidency, according to one staffer who demanded anonymity to discuss private conversations.

The White House was considering unleashing its surrogates on the network, planning to hit the mistakes hard in order to change the subject for what has been a stretch for the presidency, with questions about the Russia probe swirling and the Republican health care bill in dire straits. Aides also believe that highlighting media mistakes could be a useful way of questioning the credibility of much of the reporting on the scandals surrounding the White House to convince supporters that Trump was the victim of a witch hunt.

Trump's son, Donald Trump Jr., suggested in an interview with Breitbart News that "maybe Jeff Zucker should do an on-camera briefing about CNN's fake news scandal before the White House does any more of them." CNN's White House correspondent, Jim Acosta, has been particularly vocal in protesting the administration's dwindling number of on-camera news briefings.

He also tweeted a link to the video posted by O'Keefe's Project Veritas. The hidden-camera video showed John Bonifield, an Atlanta-based producer in CNN's medical unit, talking about how the "ratings are incredible" for the network's Russian coverage. He said the network has no "smoking gun" showing wrongdoing by Trump and that "the president is probably right to say, look, you are witch-hunting me."

CNN said in a statement that it is standing by Bonifield. "Diversity of personal opinion is what makes CNN strong," CNN said. "We welcome it and embrace it."

O'Keefe said Project Veritas got the video last Friday and that a portion, in an elevator, was recorded at CNN's headquarters. He said that Project Veritas plans to release another video involving another CNN employee, with the timing dependent on how CNN reacts to the Bonifield material.

O'Keefe and Project Veritas have a track record of aiding Republican causes, often by using hidden cameras and hiding identities, and Trump's nonprofit foundation has made two $10,000 donations to the organization. His sting operation led to the downfall of ACORN, a community organizing group that O'Keefe portrayed as engaging in criminal activity via hidden camera.

He declined in an interview to discuss how the Bonifield video came about. O'Keefe said his efforts are journalistic and, since they include video, he contends that it is more believable than media stories based on anonymous sources. The retracted CNN story was heavily dependent upon on anonymous source.

One social media exchange about the CNN story indicated how feelings about the network were running strong among Trump supporters.

Podhoretz declined to respond to Hannity online and denied an interview request.