Reapportionment is the redistribution of seats in the U.S. House of Representatives based on changes in population found in each decennial census.

WASHINGTON (AP) - President Donald Trump signed a memorandum Tuesday that seeks to bar people in the U.S. illegally from being counted in congressional reapportionment, a move that drew immediate criticism and promises of court challenges.

Trump said that “respect for the law and protection of the integrity of the democratic process warrant the exclusion of illegal aliens from the apportionment base, to the extent feasible and to the maximum extent of the President’s discretion under the law."

Reapportionment is the redistribution of seats in the U.S. House of Representatives based on changes in population found in each decennial census.

Dale Ho, director of the ACLU’s Voting Rights Project, said the order would be found unconstitutional by the courts.

“The Constitution requires that everyone in the U.S. be counted in the census,” Ho said. “President Trump can’t pick and choose. He tried to add a citizenship question to the census and lost in the Supreme Court ... We will see him in court, and win, again.”

The Census Bureau said last month that more than 90 million households had already responded to the 2020 Census with the majority doing it online. People can still respond on their own online, over the phone or by mail — all without having to meet a census taker. Only this past week, door-knockers started heading out to households in six areas whose residents hadn’t yet answered the questionnaire.

Trump’s efforts to add the citizenship question drew fury and backlash from critics who alleged that it was intended to discourage participation in the survey, not only by people living in the country illegally but also by citizens who fear that participating would expose noncitizen family members to repercussions.

After the Supreme Court blocked the citizenship question from being asked, Trump ordered the Census Bureau to gather citizenship data from the administrative records of federal and state agencies. That order also is being challenged in the courts and the overwhelming majority of states have refused to share information about driver’s licenses and ID cards. 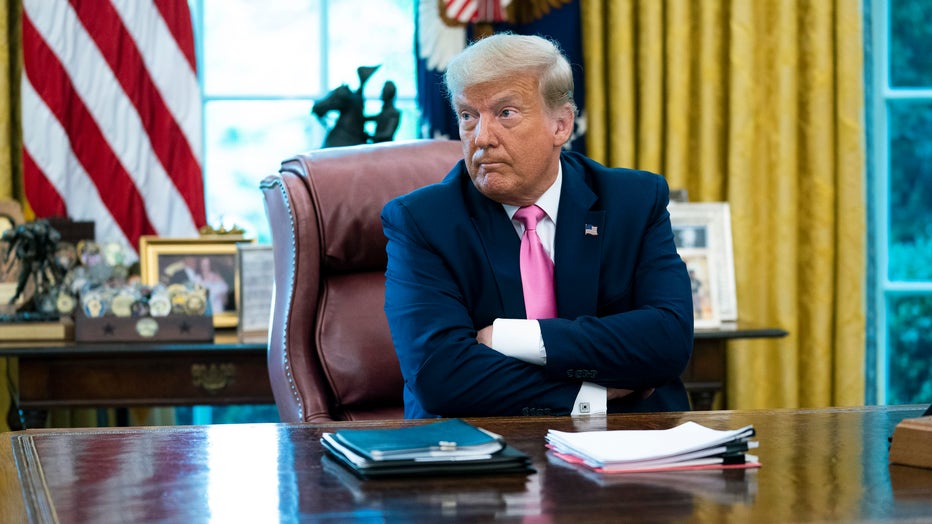 FILE - U.S. President Donald Trump talks to reporters while hosting Republican Congressional leaders and members of his cabinet in the Oval Office at the White House July 20, 2020 in Washington, DC. (Photo by Doug Mills-Pool/Getty Images)

However, four states with with Republican governors are cooperating, with Iowa, South Carolina and South Dakota recently joining Nebraska in agreeing to share state driver’s license information with the U.S. Census Bureau.

Trump’s move comes in the lead-up to the November election as he is trying to motivate his base supporters with fresh action against illegal immigration, which was a mainstay of his 2016 campaign

‘There used to be a time when you could proudly declare, ’'I am a citizen of the United States. But now, the radical left is trying to erase the existence of this concept and conceal the number of illegal aliens in our country'," Trump said. “This is all part of a broader left-wing effort to erode the rights of Americans citizens, and I will not stand for it."

It's not the first time that an attempt had been made to keep out immigrants living here illegally from the once-a-decade census and the subsequent allocation of congressional seats. In 1979, the Federation for American Immigration Reform and several members of Congress sued, demanding that the 1980 census exclude undocumented immigrants from apportionment. The case was dismissed, said Margo Anderson, a history professor at the University of Wisconsin-Milwaukee.

In Alabama, state officials and Republican U.S. Congressman Mo Brooks are suing the Census Bureau to exclude people in the country illegally from being counted when determining congressional seats for each state.

“It’s clear if true, like the citizenship question, it will suck energy out of what the bureau is trying to do now, namely get the field enumeration going efficiently,” said Anderson in an email.