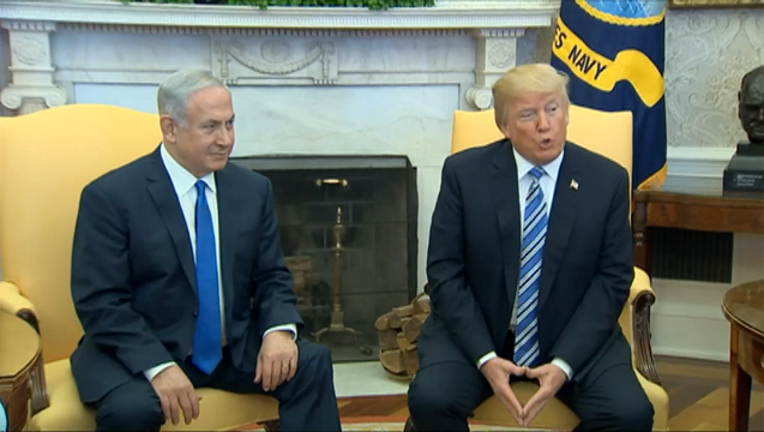 WASHINGTON (AP) - Under twin clouds of legal investigation, President Donald Trump and Israeli Prime Minister Benjamin Netanyahu presented a united front on Monday, Trump announcing he might travel to Jerusalem to preside over the opening of the new U.S. Embassy Netanyahu had wanted, and the Israeli lavishing praise on the American leader.

In a show of strong support for Netanyahu, who faces corruption allegations at home, Trump dangled the possibility of his second visit to Israel as president. However, he said nothing about whether he would use the trip to unveil his much-vaunted but still mysterious peace plan for Israel and the Palestinians.

The president said his controversial decision to recognize Jerusalem as Israel's capital and move the U.S. Embassy from Tel Aviv to the holy city had improved chances for ending the conflict, despite Palestinians' insistence otherwise. The two steps enraged the Palestinians, who claim part of Jerusalem for the capital of an eventual state and accuse Trump of abandoning the U.S. role of honest broker.

Monday's meeting also came amid the continuing U.S. investigation into Russian meddling in the 2016 presidential campaign, a probe that may have implications for the president's Mideast peace point man, son-in-law Jared Kushner, who recently lost his top secret security clearance. And, it took place as profound turmoil in the Middle East threatens hopes of a resumption in Israeli-Palestinian negotiations and attempts to restore stability in the volatile region more broadly.

Trump said his Mideast team, led by Kushner, was hard at work on a peace proposal that is nearing completion, but he offered no details on the plan that the Palestinians say will be dead on arrival and not worth discussing.

He said that despite their anger, "the Palestinians, I think, are wanting to come back to the table." There was no apparent evidence for the assertion.

But, Trump said he had actually given peace a chance by removing Jerusalem as an obstacle in long-stalled negotiations that have collapsed under successive U.S. administrations of both political parties. "Nobody could get past, No. 1 Jerusalem," he said. "We've taken it off the table. So this gives us a real opportunity for peace."

Trump said he was looking into the possibility of traveling to Jerusalem in mid-May, when the embassy is slated to move into a temporary location that is now an annex of the U.S. consulate. "We're looking at coming," he said. "If I can, I will."

With Netanyahu looking on, Trump said he had rejected a $1 billion plan for a new embassy in favor of the temporary facility, which would cost only $250,000. Eventually, however, that embassy would have to be expanded to accommodate more than a handful of diplomats. The cost of an expansion likely would run in the hundreds of millions of dollars, based on construction costs for U.S. embassies around the world.

For his part, Netanyahu lavished praise on Trump for the Jerusalem recognition and the embassy move, comparing him with the Persian King Cyrus, who allowed Jews to return to Jerusalem from Babylon 2,500 years ago; former British Foreign Secretary Arthur Balfour, who signed a declaration in 1917 supporting the creation of a Jewish state in what was then the British mandate of Palestine; and President Harry Truman, the first world leader to recognize Israel in 1948.

"Mr. President, this will be remembered by our people throughout the ages," Netanyahu said. He added that the U.S.-Israel relationship had never been closer than since Trump took office.

For all the warmth and bonhomie, misgivings are percolating under the surface over Iran, where Israel sees Trump's efforts to crack down on the Jewish state's archenemy as lacking.

Iran and its activities in Syria and Lebanon are a profound concern to Israel, and Netanyahu made clear Iran is his highest priority.

Trump has vowed to pull out of a 2015 nuclear deal with Iran in mid-May unless the U.S. and Europe agree on sanctions that would punish Iran for activity not covered by the accord or, in some cases, that would be eventually permitted under its terms.

Israeli officials are concerned Trump may not demand enough, particularly on Iran's ballistic missile program, and are wary the administration may be acquiescing to Iran's growing presence in Syria and influence in Lebanon - two Israeli neighbors.

"Iran has not given up its nuclear ambitions," Netanyahu said. "It came out of this nuclear deal emboldened and enriched."

"Iran must be stopped," he said.

Netanyahu's visit to Washington coincides with the annual conference of AIPAC, the powerful pro-Israel lobby. He will speak to the conference on Tuesday. Vice President Mike Pence and U.N. Ambassador Nikki Haley are to address the conference later Monday.

Josh Lederman contributed to this report.