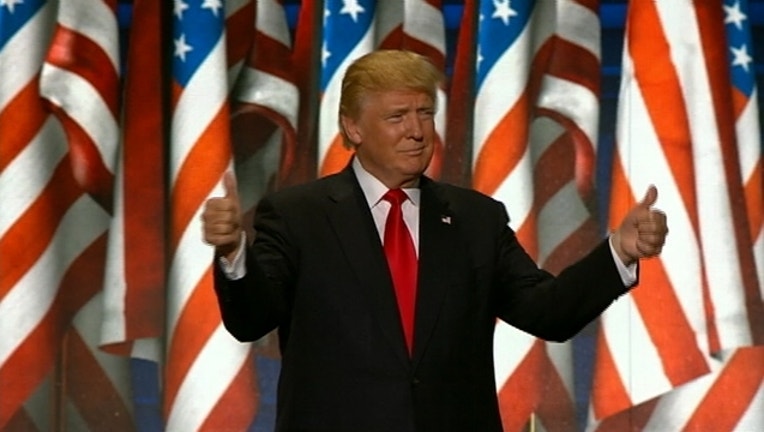 TETERBORO, N.J. (AP) — Donald Trump announced a shake-up of his campaign leadership Wednesday, the latest sign of tumult for his struggling White House bid less than three months from his Election Day faceoff with Hillary Clinton.

The Republican nominee named Stephen Bannon of the conservative Breitbart News website as chief executive officer and promoted pollster Kellyanne Conway to campaign manager. The moves signal that Trump plans to embrace his populist, outsider persona in the campaign's final stretch rather than moderate and extend a hand to more traditional Republicans.

"I've known both of them for a long time. They're terrific people, they're winners, they're champs, and we need to win it," Trump told The Associated Press in a phone interview in the early hours of Wednesday morning.

Manafort has spent months trying to ingratiate Trump to Republican lawmakers who have urged the billionaire businessman to dial back his fiery rhetoric and run a more traditional campaign. Trump has largely resisted those pleas and the latest staff changes seemed to guarantee he'll continue to maintain that posture.

Bannon's website has been a cheerleader for Trump's campaign for months and also critical of Republican leaders, including House Speaker Paul Ryan. A former Goldman Sachs banker, Bannon does not have presidential campaign experience but he shares Trump's combative approach to politics.

Conway told the AP the moves were "an expansion at a critical time in the homestretch."

Manafort deputy Rick Gates, who has been traveling often with Trump, is expected to maintain a senior role with the campaign.

Manafort, who took over the reins following the departure of campaign manager Corey Lewandowski in June, has come under scrutiny because of his past work for a pro-Russian Ukrainian political party. The Associated Press reported Wednesday that Manafort helped the party secretly route at least $2.2 million in payments to two prominent Washington lobbying firms in 2012, doing so in a way that effectively obscured the party's efforts to influence U.S. policy. Gates, who had worked with Manafort on Ukrainian issues, told the AP he and Manafort had consulted with the lobbying firms on Ukrainian politics, but called the actions lawful.

The campaign shake-up, first reported by the Wall Street Journal, comes as polls show Trump trailing Clinton nationally and in key battleground states following a difficult campaign stretch that saw him insulting the Muslim parents of a U.S. Army soldier who died in Iraq and temporarily refraining from endorsing Ryan in his primary race.

Amid the tumult, Trump has appeared increasingly agitated, discussing the possibility of losing publicly and questioning his advisers' advice. "I am listening to so-called experts to ease up the rhetoric, and so far, I'm liking the way I ran in the primaries better," a testy Trump told Time Magazine.

While Trump's campaign staff publicly insists there is plenty of time left for the Republican to change the trajectory of the race, the candidate is facing a shrinking timeline. Early voting begins in a handful of states in September.

Details of the new pecking order were hashed out at a lengthy senior staff meeting at Trump Tower Tuesday while the candidate was on the road. A statement announcing the hires was released Wednesday. Additional senior hires are expected soon.

Both Bannon and Conway have close ties to Republican megadonor Robert Mercer, who leads a New York hedge fund. Mercer has investments in Breitbart News. He also put $13.5 million into a super PAC Conway ran during the Republican primary in support of Texas Sen. Ted Cruz.

Mercer has authorized the pro-Cruz super PAC to begin doing work to help Trump. Super PACs are organizations that can raise and spend unlimited amounts of money to support a candidate, but can't coordinate with the candidate's campaign.

Trump's own campaign has enjoyed a burst of fundraising from direct mail and online donations, saying it raised $64 million that way in July alone — the vast majority of which goes to his campaign, not the Republican Party.

Although Trump has repeatedly said he plans to lean on the party to pay for key operations such as voter door-knocking, it is increasingly clear that he will have the money to build on his own if he chooses to do so.

The campaign did announce Tuesday that it would finally begin airing its first ads of the general election next week in the battleground states of Florida, Ohio, North Carolina and Pennsylvania.

While polls have shown Clinton building a lead following last month's convention, Democrats fear that a depressed voter turnout might diminish support among the minority, young and female voters who powered Obama to two victories.

Clinton said at a voter registration event at a Philadelphia high school that she's "not taking anybody anywhere for granted" in the race for the White House.