While flight cancellations and delays will happen, there are a few ways you can help prevent yourself from a travel nightmare. LiveNOW from FOX's Josh Breslow spoke with FOX Weather's Jason Frazer to get his secret tips.

Traveling with dogs can be stressful. Throw in holiday home stays at one of the most chaotic times of the year and double that stress for humans and animals alike — especially when hosts have pets of their own.

Large gatherings, unfamiliar smells and sounds, mixing older or sedate dogs with energetic pups, and introducing small children or cats to a dog with no prior exposure are among the issues that can spoil the experience or, worst case, cause physical harm.

But tensions can be dialed way down with a little preparation, said certified dog behaviorist Gabrielle Johnson of Richmond, Virginia. Knowing when to pull the plug and head for a pet-friendly hotel or boarder is also key.

"Certainly holidays can be a tricky time because everyone’s out of their routine, out of their schedule. We’re in tight spaces. Stress is high," Johnson said.

RELATED: Love for 'Colors': Man's pet turtle of 24 years sparkles as flower girl in his wedding

Johnson warns that dogs that are typically fine at home may be pushed too far. Learning to read unusual body language is important.

"Things like yawning, licking their lips, turning away, looking away, freezing, getting tense," they said. "We want to see soft, wiggly, loose, relaxed. If we see some of those (other) signs, it may be an indicator that it’s time to get our dog out of that situation."

Taking a crate along is a great idea for already crate-trained dogs but don't try to force it for the first time, trainers said. Packing a bed and familiar blankets, toys, dishes, and food and treats are musts.

First-time introductions between dogs should be done on neutral ground, outdoors. The humans should plan ahead in case pets need to be separated, including considering baby gates, particularly when dogs are eating. Owners who suspect anxiety might be a problem could consider medication. 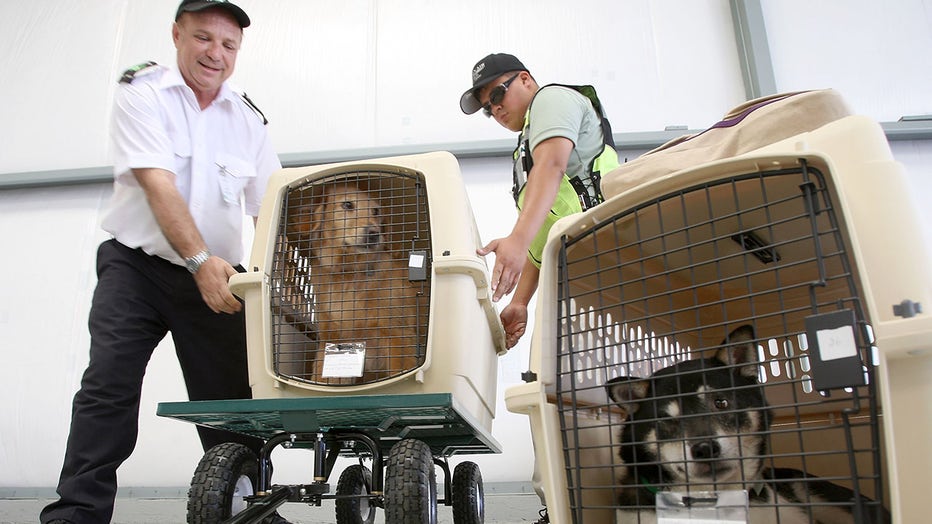 President and CEO Don Weisel (L) helps load pets for take-off on the southern California maiden voyage of Pet Airways on July 16, 2009 in the Los Angeles-area city of Hawthorne, California. The new pets-only airline will operate out of Denver, Chicag

Nicole Ellis, a certified professional dog trainer for Rover.com, suggests practicing with dogs who have not traveled much. If a dog is going from a quiet rural area to a noisier urban environment, take a few shorter trips to simulate the holiday surroundings, she said.

She also advises packing mental enrichment toys to help a dog decompress and navigate a new environment without getting rowdy. Licking and chewing also help a dog self-soothe, Ellis said.

Paasche's brother has three dogs of his own, including two older ones. Walter, anxious his entire life, has met only his younger canine cousin. He takes medication but once nipped at a child on a previous stay at another home. The children of Paasche's brother are older, but he's concerned about the two new dogs.

"You know how it is with older dogs, they get a little more set in their ways and are less amenable to new things that puppies and younger dogs just don’t care about," Paasche said. The hosts have a garage for Walter if things go awry.

"Their GI tracts can get upset very easily with change," she said. "Don't assume your food will be available locally."

Richardson said dogs should be introduced to young children slowly and very carefully. If toddlers don't understand the concept of leaving a dog alone, they should be separated.

Home stays aren't all gloom and doom, though.

Phoebe Yung of Brooklyn adopted a pandemic pup, a rat terrier named Moose. She and her husband travel with Moose often, including long trips to Europe. The holidays have them driving to Montreal to stay with relatives — including two young children — for six days.

"When she sees her pet carrier she jumps right in," Yung said of Moose. "We really try to follow the rules of any house we're in. We bring along a mat, and when she's sniffing around a new place and seems to find a spot she's comfortable with we put it down and that's her spot."

Young children scare Moose, but she runs away and shakes in a corner rather than getting aggressive, Yung said. She added that she would step in if Moose gets too stressed.

Emily Keegans, Seattle Humane's chief of animal behavior, said dog owners should ask themselves if the situation is going to be a happy one for their animals, and communicate with hosts.

"If I have friends or family come to stay at my house, my first question is ‘How does your dog get along with cats?’" she said. If the answer isn't promising, she'll put her cat in another room and talk through logistics.

Lily Hargis lives in Richmond with Milo, the Labrador-Australian shepherd mix she rescued last year. She spent her last three Christmases visiting her great-grandmother — who has no pets — in Oak Ridge, Tennessee.

"I'll never forget the stress of that first holiday with Milo in her home, how worried I was about his behavior being perfect and reflecting on me," Hargis said. "I think it’s especially tough when there's a generational gap."

Happily, her great-grandmother warmed up to Milo right away: "Within five minutes she had him up on the couch and in her lap getting cuddles."

This year, Christmas will be closer to home, but she has other worries involving Bourbon, her stepsister's ancient pit bull who "won’t tolerate any shenanigans."

To prepare, Hargis and her mother spent several sessions with Johnson, working on getting Milo and Bourbon to a place "where they could comfortably relax in the space together."

"It just felt necessary," Hargis explained. "There are so many aspects of the holidays that require our dogs to do things they really don’t practice much."

As soon as they arrive, Hargis will prepare frozen Kongs and other enrichment items to help Milo decompress in a quiet room.

"Honestly, I sometimes get jealous of how well his holidays are curated to avoid stress and maximize fun," Hargis said. "It makes me want to see how I can do the same for myself."