It's been 10 days since a train derailed in the Joppa neighborhood of Dallas, but looking at it Sunday, very little has changed since.

DALLAS - It's been 10 days since a train derailed in the Joppa neighborhood of Dallas.

But looking at it Sunday, very little has changed since.

The track has been repaired, but there are still damaged cars, grain, and debris to remove.

Some in the Southeast Dallas community already had concerns about the railroad.

Following the derailment, their concerns have heightened.

Ever since historic Joppa was founded in 1872 by emancipated slaves, train tracks have been running through the old freedmen’s town.

"I love the trees. I love the birds," said Miriam Matthews- Fields, who lives in Joppa.

But Matthews-Fields doesn’t love the sound of late night locomotives.

"You can just hear the vibrations like an earthquake," she said.

Sunday, cars continue to pass a pile of steel after a train derailment earlier this month. 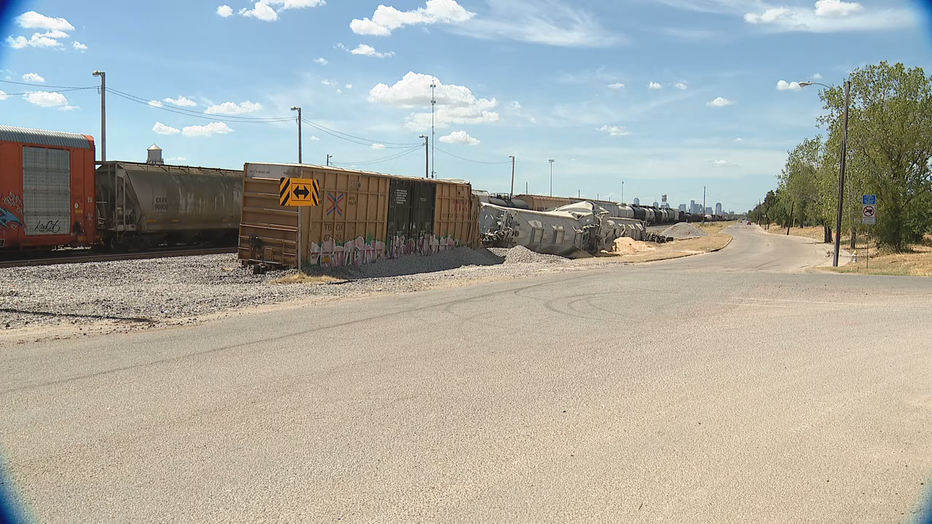 Surveillance video showed the moment the train went off the tracks, followed by a cloud of dust.

No one was injured.

Hazmat crews were called out, but determined the cars were carrying cornmeal.

Matthews-Fields said her first concern was whether the cargo was toxic, with a neighborhood just feet away.

"I am grateful there weren’t any chemicals on there, other than grain," she said.

But it’s been 10 days since the derailment and the mess remains.

"They could come and explain, if there was a care, but they do not care to explain apparently," said Shalondria Galimore.

Galimore, who is neighborhood association president, said she hasn’t heard anything from the company in more than a week.

When pressed for a timeline, it revealed to FOX 4 the cleanup will drag on.

Union Pacific said in a statement that the derailment is still under investigation and a contractor will remove the grain starting next week.

The process of removing the cars won’t be done until next month.

Until then, members of the community will continue to look out for each other.

"We have a lot of challenges with being overlooked and included, underserved, and I believe in the southern sector and community of color, it’s overlooked," Galimore said.

And speak out when they feel something isn’t right.

"We aren’t enemies with Union Pacific. We know that we need this transportation to go through our community," Matthews-Fields said.

Matthews-Fields said talks are still on the table for possibly a safety wall next to the tracks. That’s something she said she will continue to bring up to the city of Dallas.