Four hooded men with masks and gloves were caught on surveillance cameras at Marksman Firearms back in July.

ATF agents hope that the masks the men are wearing and the colorful underwear on a man with sagging sweatpants leads them to the gun-grabbing gang.

Special Agent Meredith Davis with the Bureau of Alcohol Tobacco and Firearms is investigating the July 16 grab-and-bag-of guns from Marksman Firearms in Mansfield.

“Stole 41 firearms from their inventory. They stole a combination of rifles and pistols,” she said. “They were in the store less than a minute.”

The group parked behind the business. Two of them stayed at the car while two others calmly walked to the front with a Sawzall, crowbar and bolt cutters in hand. They manipulated, broke the glass and got inside.

“That was about 20 minutes of preparation for one minute inside the store,” Davis said.

The gun-grabbers got away with 41 rifles and handguns. At least two of them were used in violent crimes.

“One occurred in Fort Worth. One occurred in Dallas. We're trying to recover these firearms before they make it into the hands of prohibited individuals,” Davis said. “The masks that they wore obscured their identities. They wore gloves. They wore hoods on top of the masks.” 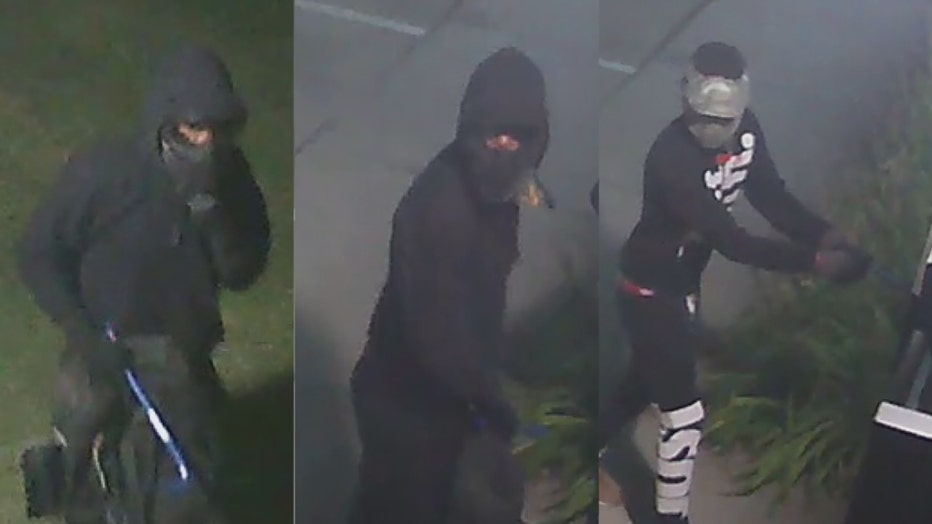 “It looks like some type of sporting equipment masks. You could maybe use it for paintball or ATV riding or something outdoorsy,” Davis said. “One of the individuals has a particularly unique red light attached to his paintball mask and then eventually to the front of his clothing. One of the individuals had on some very unique colorful tie-dyed boxer shorts that were exposed underneath his running suit.”

“Stolen gun threatens everyone,” she said. “We need to get these firearms off the street as soon as possible.”

A $10,000 is being offered for information leading to the arrest. Anyone with info is urged to call 1-800-ATF-GUNS or the Tarrant County Sheriff’s Office.