This week’s Trackdown focuses on the murder of a man in Southwest Dallas. Police said the motive remains a mystery.

DALLAS - This week’s Trackdown focuses on the murder of a man in Southwest Dallas.

Ivan Saucedo-Ramirez was shot and killed as he was driving along in broad daylight.

The 28-year-old was shot back on April 29, but was in a coma almost two months before he died.

“We've had few clues in this one,” Wheeler said. “That’s why it’s important to get the public involved.”

There are few clues about the murder of Saucedo near Raul Quintanilla Middle School.

“On April 29th, at about 2:35 p.m., our victim is traveling west on 2600 block of Remond Dr. here at Quintanilla, when he was shot and killed by an unknown suspect driving behind him,” Det. Wheeler said.

Wheeler put out a flyer in the hopes that someone might tell him who has a certain Dodge Journey. 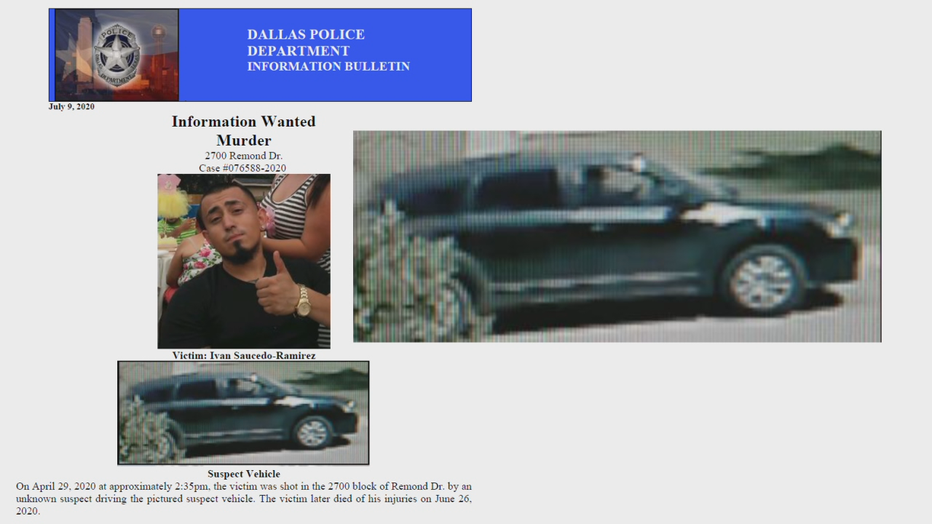 The bullet that killed Saucedo was fired from that vehicle.

Police said a witness told them Saucedo passed the shooter.

“We believe that he shot through the back of the windshield,” Wheeler explained. “Killed our victim and fled there down Santerre Ave. and turned back.”

Video shows the shooter's SUV, which Det. Wheeler thinks is a Dodge Journey.

“At this point, we don’t know if it was road rage or if it was a hit on our victim,” Wheeler said.

Wheeler is hoping to bring closure to the victim’s family by solving this murder.

Crime Stoppers is offering a reward for information in this case.

Those with information can call Det. Wheeler at 214-671-3686 to help find Ivan Saucedo-Ramirez' killer.