Last night's storms caused quite a bit of damage in the Hood County city of Tolar. People are cleaning up downed trees and debris. Tolar ISD schools are also opening late because of the damage.

TOLAR, Texas - Storms on Wednesday night caused quite a bit of damage in parts of North Texas. The worst was in the Hood County city of Tolar, about 50 miles southwest of Fort Worth.

The storm tossed around tree limbs and scraps of metal. It also knocked out power to the entire city.

Mayor Terry Johnson said neighboring cities sent in crews to help with the cleanup. They worked quickly to clear the roads so utility crews could get in to restore power and keep the city’s water pumps running. 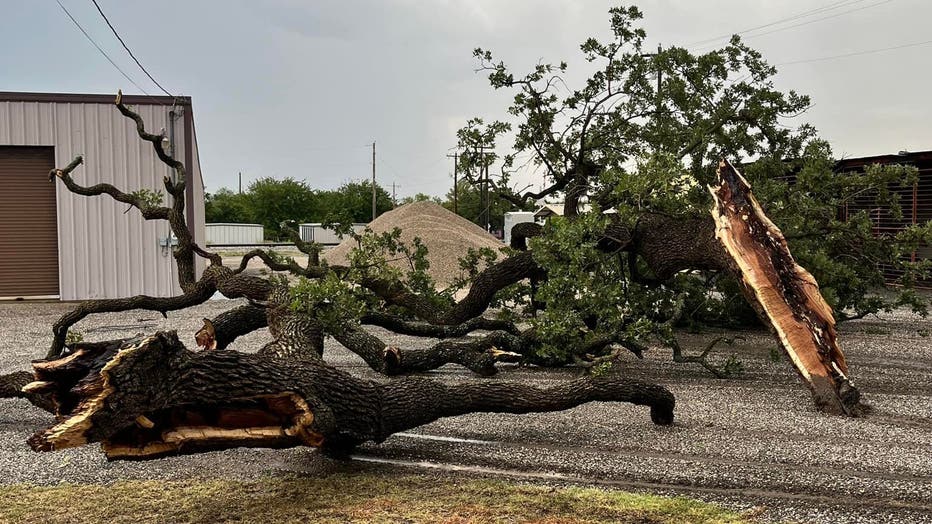 Johnson said it felt like a tornado swept through. In his 20 years as mayor, he has never experienced a storm like it.

"It started coming in real hard and the next thing you know the wind picked up. It kept picking up and everything was blowing everywhere," he said. "All the streets were closed. Big trees fell down. We have one street that nearly every tree on that side – 100-year-old pecan trees, oak tees – all the big trees are mostly down."

Johnson said nearly all of the power in the city has been restored. Only a couple of streets are still being repaired.

Tolar ISD pushed back the start of school on Thursday. Classes will begin at 10 a.m. and buses will run two hours later than normal.

House struck by lightning in Irving

The storms also brought high winds, lightning and some hail to the DFW metroplex.

FOX 4 viewers shared photos of backyard flooding in Arlington and Fort Worth, hail in Grand Prairie and tree damage in Midlothian.

A house in Irving near Beltline and Shady Grove roads was badly damaged by a lightning strike.

The woman who lives in the home said the living room was hit. Thankfully, no one was in that room, and no one was hurt.