Stargazers across the country will be treated to a show in the sky as we see a total lunar eclipse. NASA scientist Michelle Thaller joins LiveNOW to talk about the eclipse and when people should be looking for it.

Stargazers will have their chance to see a total lunar eclipse this weekend, from May 15-16.

The event will feature a blood moon, which occurs during a total lunar eclipse. That’s when Earth lines up between the moon and the sun, hiding the moon from nearly all of the sunlight but allowing just enough light through to turn the moon a deep red color. 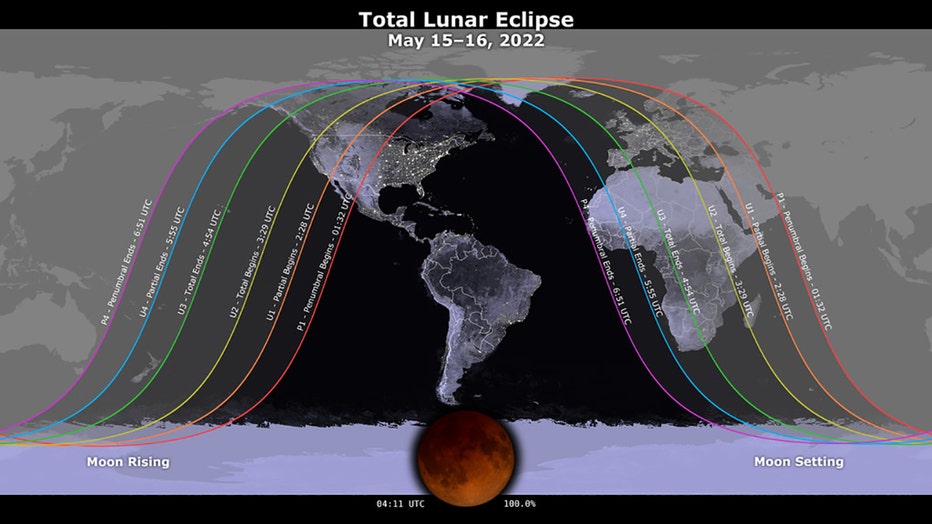 A map showing where the May 15-16, 2022 lunar eclipse is visible. The contours mark the edge of the visibility region at eclipse contact times. (Credit: NASA Goddard Space Flight Center/Scientific Visualization Studio)

The moon will also appear larger than usual, about 17%, which is also called a "supermoon." NASA defines a supermoon when the moon’s orbit is closest to Earth at the same time the moon is full. The moon’s distance at the point is about 226,000 miles from Earth. The term was first coined in 1979, according to NASA. Scientists said it's hard for people to detect a supermoon visually.

What causes a 'blood moon' eclipse?

Here's why the moon will appear red during the upcoming lunar eclipse.

NASA said viewers don’t need any special equipment to watch a lunar eclipse. However, the agency said binoculars or a telescope will enhance the view and the red color. A dark environment away from bright lights makes for the best viewing conditions, according to the agency.