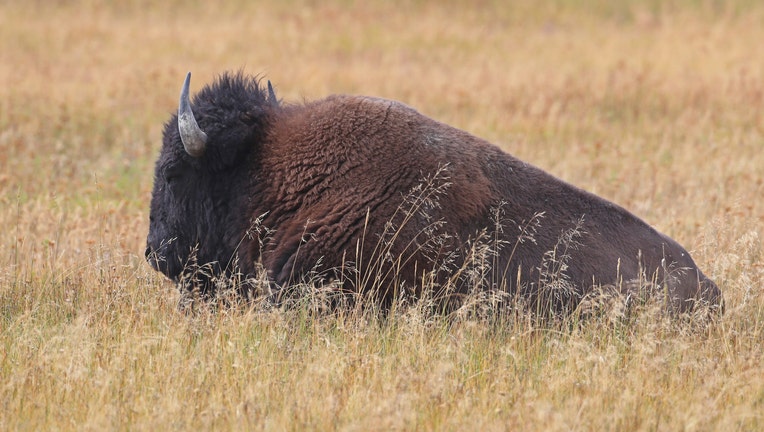 QUITAQUE, Texas - A woman who admittedly strayed too close to a herd of bison in Texas was injured after one of the bison "gored" her and threw her into a bush.

"But you know it’s going to make a hell of a tick tock," the woman said in a text message as she reportedly waited 50 minutes for help to arrive.

In a viral TikTok video, Rebecca Clark is filming as she tries to pass by a herd of bison at Caprock Canyon State Park in the Texas panhandle.

"There you go, keep going," she says as she slowly walks near them. "I don’t want to deal with them, I just want to go by, come on keep going ... I didn’t want to go through the bushes again."

A few seconds later, a bison turns around and starts running toward the camera as she screams and tries to run away.

"He rammed my back, gored me and threw me into a mesquite bush where I laid for 50 minutes until help arrived," she said in a follow-up video also posted on TikTok.

Clark said cell service was limited and she was unable to call 911. She sent text messages to friends and family and was eventually airlifted to a hospital in Wichita Falls more than two and a half hours from the park.

She has a hole in her back and was thrown into lots of stickers and thorns, but said she’s otherwise OK.

Caprock Canyon State Park is home to the Texas State Bison Herd. Bison are the largest land animal in North America and "need a lot more personal space than you do to feel comfortable," according to the Caprock Canyon website.

"As a rule, bison require at least 50 yards (half a football field) between them and people," the website says. "Use the 'rule of thumb' to make sure you are far enough away: Stretch your arm out away from your face and give bison a thumbs up! Now close one eye. Can you cover the bison with your thumb? If not, you’re too close!"