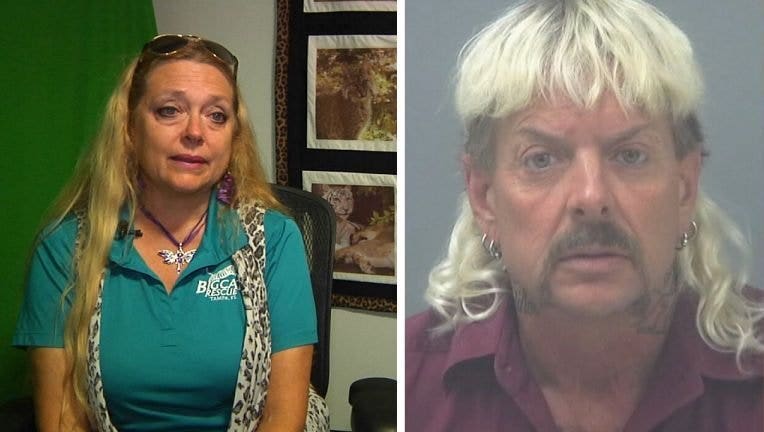 Joe Exotic is turning to an unlikely source to help him get out of prison — his rival and Big Cat Rescue CEO Carole Baskin.

Joe and Carole’s feud was the subject of the immensely popular Netflix documentary series "Tiger King." He is currently two years into a 22-year prison sentence stemming from a failed murder-for-hire plot against Baskin. Now, he’s taking her and her husband, Howard, up on an offer to support his early release.

Entertainment Tonight spoke to Joe, whose real name is Joseph Maldonado-Passage, from Federal Medical Center in Fort Worth, Texas where he discussed Howard recently telling the Mirror that, despite his attempt to have his wife killed, they would be willing to help him get released if he supports a piece of legislation designed to end private big cat ownership.

The Big Cat Public Safety Act, which already passed in the House of Representatives, would effectively ban the breeding and ownership of big cats like lions and tigers in the U.S. without a license from the U.S. Department of Agriculture. The ease with which people can own and operate businesses involving big cats was one of the many startling revelations in "Tiger King."

"It is time for Carole and Howard to put up or shut the hell up because I'm accepting their offer," Joe told Entertainment Tonight. "And I'm gonna take it one step further than that, OK? It is time to get on the phone to President Biden or whoever they need to that they've got in their little financial pocket and say, 'Hey, Joe is willing to support a big cat bill to help protect cats in America from being exploited. But we need to keep our end of the deal and get Joe a pardon because this wasn't really about murder for hire or shooting five tigers -- this was about exploiting Joe to support Carole's agenda.' So, there's the offer on the table, all right?"

He continued, noting that he doesn’t necessarily believe in the law but is willing to support it if it means getting cut loose from prison early.

"The way it's written is not gonna help anybody except PETA and Carole Baskin," he explains. "So, I'll testify in front of the Senate, I'll testify in front of the House, they want to end big cats in America and they want to end the exploitation of them, I'm the man to do it. But it's time to get an attorney general down here and listen to the evidence that I have to prove I'm innocent and get me the hell out of here. And they've got my support. Other than that, they need to stay the hell out of the news with all their crap just to get their name in the paper because I just called their bluff."

"Unfortunately, Joe continues to be his own worst enemy," Howard told Fox News.

"I pointed out in a media interview that if you look at the list of people who have actually gotten pardons, it was often people who had redeemed themselves by doing good with their lives either from or after incarceration," he wrote in part. "I suggested that if Joe really believed what he said about regretting putting animals in cages, he could put himself in the category of people who had done something good with his life by supporting the Big Cat Public Safety Act.  I said if he did help us get the bill passed, we would be willing to advocate for a reduction in his sentence."

Carole told Entertainment Tonight that it will take more than Joe Exotic simply vocalizing support of the legislation to get her to back his early release.

"I wouldn't seek a reduced sentence for Joe based upon him just saying he'd help end cub handling," she said. "I think he'd say anything, but not actually do it. He'd have to actually work with authorities to bring all of his buddies to justice and work with legislators to end cub handling. Then, I'd want him to be rewarded for having done the right thing."

A convicted sex offender with an outstanding warrant is on the run. The U.S. Marshals Fugitive Task Force is searching for 58-year-old Printiss Deese.