It's a race against time to get tarps and boards up on damaged homes. Possible heavy rain on Thursday won't help the recovery efforts for North Texans with tornado damage.

DALLAS - It's a race against time to get tarps and boards up on damaged homes. Possible heavy rain on Thursday won't help the recovery efforts for North Texans with tornado damage.

Thursday will start dry, but the threat of rain and storms increases through ought the day. The cold front moving in will also drop temperatures, with low temperatures expected in the 40s.

The Insurance Council of Texas estimates $2 billion on insured home and auto losses from Sunday's tornado outbreak. Since that does not include commercial buildings, the number will likely go up. The number could also go up if tornado-damaged homes take on more water damage.

Linda Eichenwald says it was like a bomb went off when the tornado hit her neighborhood near Hillcrest and Royal in North Dallas. They’ve been cleaning up the destruction since. Her home is one of nearly 900 homes and businesses damaged in Dallas Sunday night.

The EF-3 touched down for almost 16 miles. A total of nine tornadoes tore through North Texas. 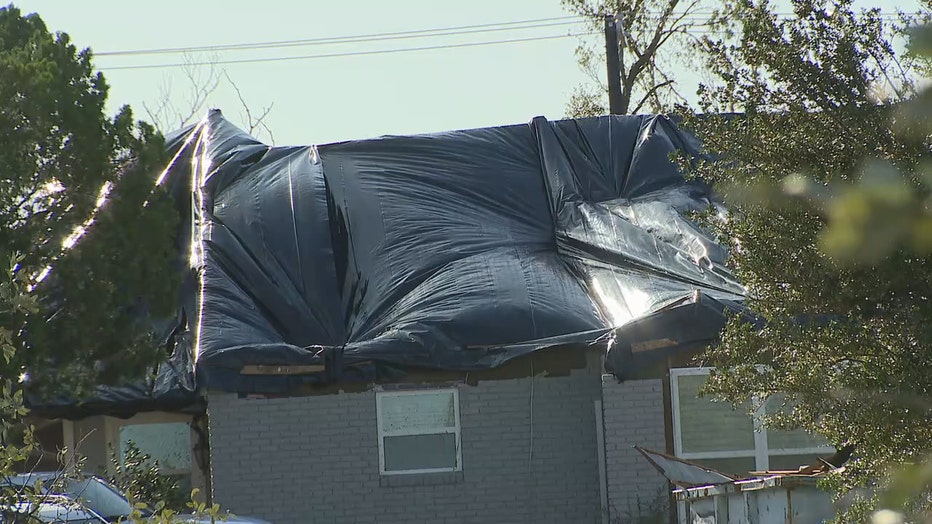 Eichenwald found debris and pieces of insulation from other homes inside her own. Her concern now is for Thursday’s forecast, when rain is expected and another chance for strong storms.

“We don’t have time. This is why they boarded up yesterday,” she said. “I’m on the phone getting people to come out to do it because I don’t want the water damage because tomorrow’s supposed to be very much horrible rain.”

Neighbors are hoping the tarps will hold.

Cindy Higby is thankful for three full days of beautiful weather since the storms. Sher now wonders if the rain will reveal more damage that she hasn’t seen.

While some in the area have generators, others do not. Wednesday was day three without power for some.

“I haven’t had a hot shower in a while,” Higby said. “But we stayed with the fort.”

Of the nearly 900 homes and businesses damaged, about 100 are a total loss. Belongings inside those buildings could be exposed to rain on Thursday.