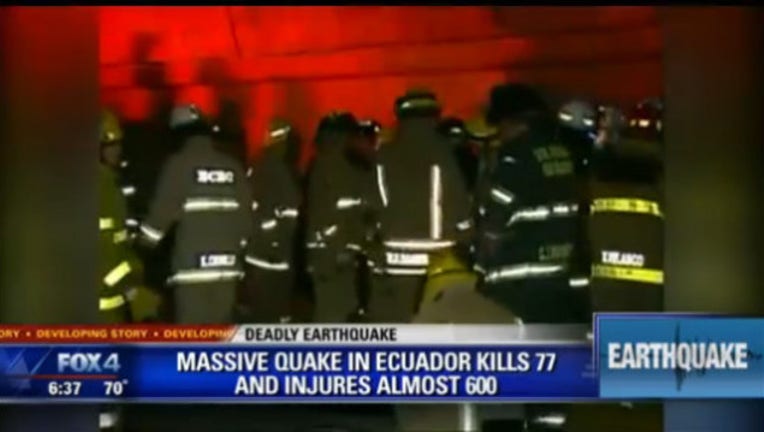 QUITO, Ecuador (AP) — The Latest on the earthquake in Ecuador. (all times local):

Authorities in Ecuador are mobilizing resources and help is getting to the ground after a long night of fear and uncertainty caused by a magnitude-7.8 earthquake that killed at least 77 people.

Vice President Jorge Glas is overseeing efforts until President Rafael Correa makes an emergency return from a visit to Rome. Glas arrived Sunday morning in Manta along the coast along with dozens of rescuers. The city's airport is badly damaged, but is receiving relief flights.

More than a dozen roads have been closed due to damage from the earthquake, making it harder for rescuers to reach where they are needed most.

The Transportation Ministry says that the hardest hit was Manabi province, near the epicenter. Eight major roads there were either closed or partially collapsed from landslides or strong movements of the earth.

The strongest occurred overnight around 2 a.m. local time about 50 miles (80 kilometers) from the main quake's epicenter and was felt in cities hundreds of miles kilometers away.

The U.S. Geological Survey said that quake had a magnitude of 5.6.

Authorities are warning that more aftershocks are in store in the coming hours and days.

Pope Francis has offered prayers for the people of Ecuador affected by the violent earthquake overnight "that caused numerous victims and great damage."

Francis asked the faithful in St. Peter's Square on Sunday to pray for those suffering in the aftermath of the magnitude-7.8 earthquake, as well as those hit by a separate magnitude-7.0 tremor in Japan early Saturday.

He says "may the help of God and of neighbors give them strength and support."

(This item corrects earlier reference to Japan quake magnitude 7.0 instead of 7.3 and local time Saturday, not Friday).

Ecuador's earthquake is about six times stronger and has released more energy than the one in Japan a day before.

David Rothery, a professor of planetary geosciences at The Open University, northeast of London, says the total energy released by the magnitude-7.8 quake Saturday in Ecuador was "probably about 20 times greater" than the magnitude-7.0 quake in Japan early Saturday.

Rothery told The Associated Press on Sunday that bigger quakes last longer, so both the strength of the shaking and the duration contribute to the total energy.

Rothery says the quake in Ecuador began deeper underground than the recent Japan quakes, which would have lessened the shaking on the ground. But the greater loss of life and greater damage in Ecuador can be attributed to the country's less stringent construction codes.

The scientist also says "there is no causal relationship between the earthquakes in Ecuador and Japan."

Authorities in Ecuador say landslides are making it difficult for emergency workers to reach the towns hardest hit by a magnitude-7.8 earthquake.

The quake was centered on a sparsely populated coastal area 170 kilometers (105 miles) northwest of Quito, the capital.

Ecuador's Public Works and Transport Ministry says 12 main roads have been closed. A landslide has shut down one road in Cotopaxi and a landslide warning has been issued for a road in Zamora Chinchipe.

The Home Ministry says five helicopters and over 80 buses are ferrying 4,000 police to the quake zone.

Vice President Jorge Glas also says electricity has been restored to four towns in the Manabi province and to parts of the cities of Portoviejo and Montecristi. He says the quake has killed 77 people and injured over 570.

The strong earthquake in Ecuador also was a topic at a major meeting of oil-producing countries in Qatar.

Kabalan Abisaab, Ecuador's ambassador to Qatar, spoke to journalists on the sidelines of the meeting in Doha He says "it's a big disaster. We are very worried about the situation."

The ambassador stressed his country was prepared for such disasters, though they still can cause massive destruction. He said Ecuadorean officials are working to help those affected. The Foreign Affairs ministry has opened a hotline for people living abroad seeking information on family members in the country.

Officials say the magnitude-7.8 quake, which struck Saturday night, has killed at least 77 people and injured over 570.

Ecuador's Risk Management agency says residents who evacuated coastal towns because of the risk of a tsunami after a magnitude-7.8 earthquake can return home now.

The quake was centered on a sparsely populated area of fishing ports and tourist beaches, 170 kilometers (105 miles) northwest of Quito, the capital. The country's vice president says at least 77 people have been reported killed by the quake, and over 570 injured.

Some 10,000 armed forces and hundreds of emergency workers and firefighters have been sent to the region after the quake flattened buildings and buckled highways. Several major highways have been closed.

Ecuador's Risk Management agency says 10,000 armed forces have now been deployed to help people in the coastal area stuck by a magnitude-7.8 earthquake.

The quake was centered on a sparsely populated area of fishing ports and tourist beaches, 170 kilometers (105 miles) northwest of Quito, the capital.

Officials say the quake, which struck Saturday night, has killed at least 77 people and injured over 570.

Top officials say Ecuador is in a state of emergency and hundreds of rescue workers are rushing in after a magnitude-7.8 earthquake struck near its Pacific coast.

The Security Ministry says on its Twitter account that "every emergency protocol has been activated" and President Rafeal Correa says special quake rescue teams are coming in from Colombia and Mexico.

He says the Saturday quake has already killed 77 people and injured at least 578.

Ecuador's vice president says the toll in the country's devastating earthquake has risen to 77 dead and 578 injured.

Glas and emergency rescue workers are pressing to reach the sparsely populated area of fishing ports and tourist beaches along the country's Pacific coast where the magnitude-7.8 quake struck after nightfall on Saturday.

President Rafael Correa has signed a decree declaring a national emergency and is rushing home from Rome.

The strongest earthquake to hit Ecuador in decades has flattened buildings and buckled highways along the country's Pacific coast, killing at least 41 people and causing damage in the capital and other major cities that were hundreds of miles (kilometers) away from the epicenter.

The death toll is expected to rise Sunday as rescuers reached the sparsely populated area of fishing ports and tourist beaches where the magnitude-7.8 quake was centered.

"We're trying to do the most we can but there's almost nothing we can do," said Gabriel Alcivar, mayor of Pedernales, a town of 40,000 near the quake's epicenter. He pleaded for authorities to send earth-moving machines and emergency rescue workers as dozens of buildings in the town were flattened, trapping residents among the rubble.

"This wasn't just a house that collapsed, it was an entire town," he said.

Vice President Jorge Glas said in a televised address late Saturday there were initial reports of 41 dead in the cities of Manta, Portoviejo and Guayaquil — all several hundred kilometers (miles) from where the quake struck shortly after nightfall Saturday.

President Rafael Correa signed a decree declaring a national emergency and was rushing home from Rome.

The quake was the strongest to hit Ecuador since 1979, Glas said.