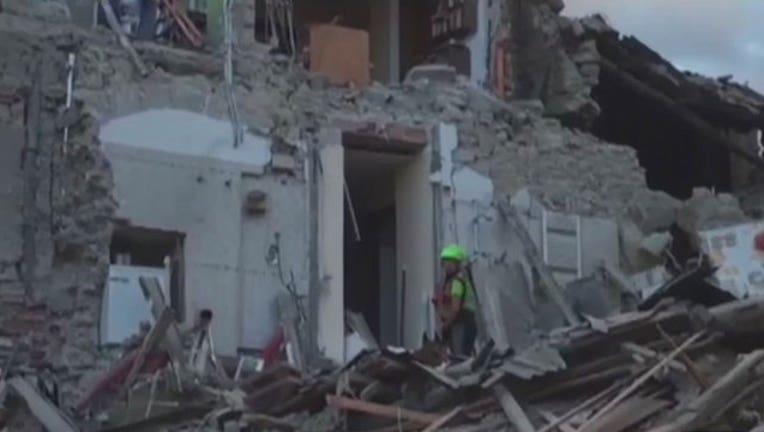 A magnitude 6 quake struck at 3:36 a.m. (0136 GMT) Wednesday and was felt across a broad swath of central Italy, including Rome.

The heartbreaking story of 9-year-old Giulia Rinaldo and her younger sister Giorgia was recounted Saturday by the bishop who celebrated a funeral Mass for 35 of the 290 people killed by the quake that ravaged central Italy before dawn Wednesday.

Bishop Giovanni D'Ercole recalled that around 6 or 6:30 p.m. Wednesday — 15 hours after the quake struck — he returned to a church in his diocese in the town of Pescara Del Tronto to recover its crucifix.

At the time, only meters (yards) from the church, firefighters were using their hands to dig out the two sisters, he said.

"The older one, Giulia, was sprawled over the smaller one, Giorgia. Giulia, dead, Giorgia, alive. They were in an embrace," D'Ercole said.

He spoke beneath the crucifix that he recovered that evening, hung in a community gym transformed into a makeshift chapel, as Italy held a national day of mourning.

As weeping Italians bid Giulia and 34 other quake victims farewell with a state funeral, Giorgia spent her fourth birthday in a nearby hospital Saturday, recovering from her ordeal.

Massimo Caico, the firefighter who pulled the girls out, told Italy's La Repubblica newspaper that the position of the older girl's body apparently created a pocket of air that allowed Giorgia to survive.

He recounted how a black Labrador, Leo, first gave a sign that he smelled something. Rescuers began digging, finding at first a doll and then a cold human leg, that of Giulia.

Then he saw the ground nearby moving "in the rhythm of what could be breathing."

"Maybe they hugged each other in their sleep or in fear, and the body of Giulia saved Giorgia," Caico told the newspaper.

According to Italian news reports, Giorgia is in a state of shock and is practically not speaking anymore. She is only sleeping, crying and asking for her doll and her mother, who is also recovering from earthquake injuries.

This story corrects the spelling of dateline to Ascoli Piceno.