A live stream capturing a 10-year-old’s select baseball game shows a Denton umpire being shoved to the ground by a coach from Abilene just seconds after a runner was called safe. That video, police say, is now part of an assault investigation.

IRVING, Texas - A team of 10-year-old select baseball players is now banned by a major North Texas tournament organizer because of what their coach did to an umpire.

The coach's attack was on the field at a kid's tournament in The Colony last weekend, and it happened incredibly fast.

The coach of a team from Abilene argued after a close play at the plate. When the umpire threw the coach out of the game, he exploded.

The organization that put on the tournament handed the video over to detectives, who now are working to interview both sides.

A live stream capturing a 10-year-old’s select baseball game shows a Denton umpire being shoved to the ground by a coach from Abilene just seconds after a runner was called safe.

The video is now part of the assault investigation, according to The Colony police. 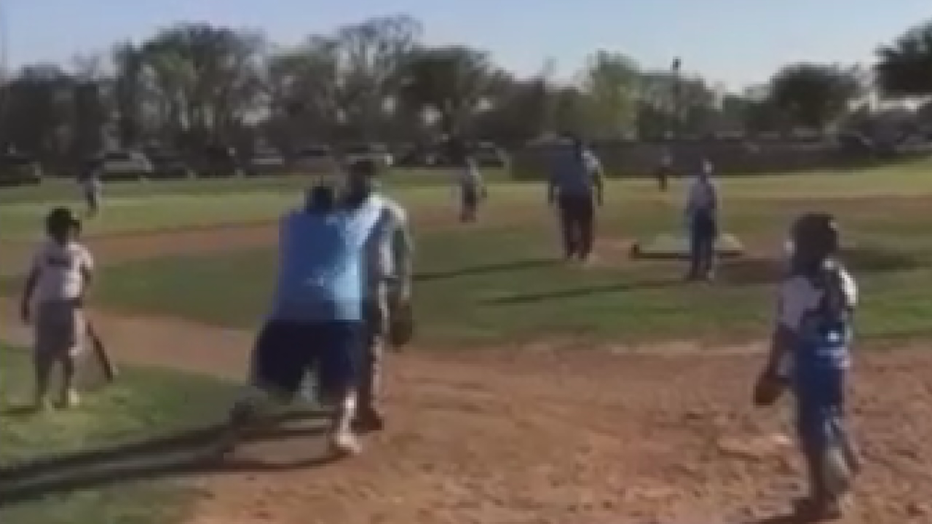 L’Erin Hampton says the video is hard to watch. He’s the president and founder of 24 Sports, which put on the weekend tournament at the Five-Star Complex in The Colony.

"It was worse than what I thought. You could feel the energy in the video," he said. "I got there, and I see an ambulance and police and the game has stopped. Sam is nowhere to be found, and he’s in the ambulance."

Phelps walked to brush off the base when the coach in the blue shirt approached him, upset about the call. Phelps then threw the coach out of the game.

"You can see when it happened. You can see the kids around," Hampton said. "And you are like, what are they thinking after that happens, right?"

Phelps, who was treated at a hospital and released, says he has neck pain.

An umpire from Denton says he's going to press charges against a boy’s baseball coach after an incident during a game this weekend. He says the coach attacked him.

"It snapped back, and that’s where it hurt the most," he said.

Phelps spoke to FOX 4 on Monday. He confirmed he’s pressing charges. The last thing he says he remembers is two fists in his face before he fell backwards.

"If there are no consequences, this can continue," he said.

FOX 4 also spoke to the coach by phone multiple times. He did not want to go on camera. He told us he's sorry for what happened and admits he assaulted Phelps ad hopes one day to apologize directly to him.

The coach is now banned from future 24 Sports tournaments.

"The why we do it is everything. We have lost that," Hampton said. "We are so focused on the score and winning the game, but the real win is the kids having fun."

Following the incident, the coach did get in his car and drive away before police arrived.

The Colony police say a detective on the case. Once probable cause is established, an arrest warrant for assault would be issued.