It's cheap at $5 a night. The hope is that it attracts people who may want to take the train to DFW Airport when they're traveling.

FORT WORTH, Texas - TEXRail will now allow overnight parking at some of its stations.

It's cheap at $5 a night. The hope is that it attracts people who may want to take the train to DFW Airport when they're traveling.

Trinity Metro says this is an option their riders have been asking for. They’re hoping with an option to park at some of their stations overnight, more people will choose TEXRail over driving themselves to DFW Airport or using a ride-share option.

Starting Monday, TEXRail riders will have the new option of long-term parking at two stations in North Richland Hills and three in Fort Worth.

Trinity Metro is hoping the price is just right to get more air travelers to adjust their plans. 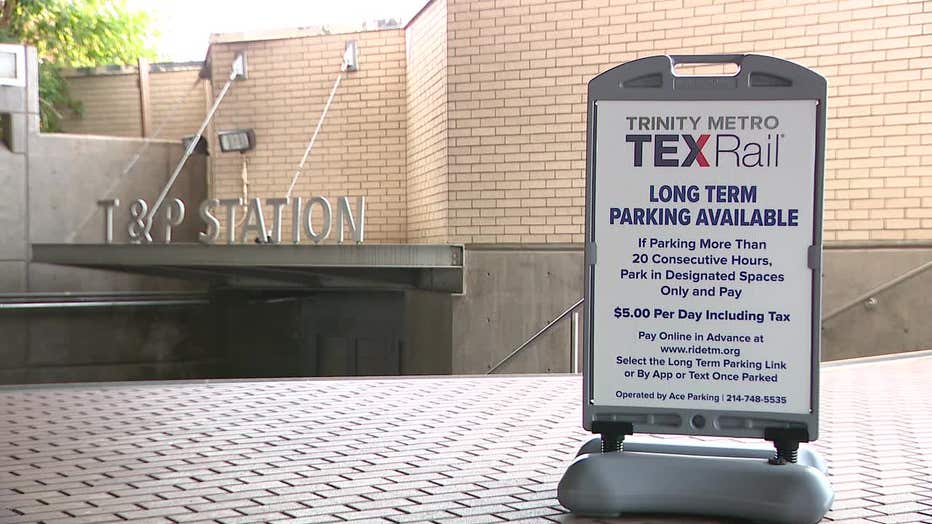 "I live in McKinney. So I drive to the Grapevine North Station, park there and then take the TEXRail in," he said. "Right now, when I’m there overnight, I’m the only car there."

Trinity Metro still offers free parking at several stations for up to 20 hours. But for any longer than that, they ask drivers to park in designated spaces marked in yellow.

Right now, each of the five stations has roughly 20 spots available.

"I mean you’re saving a lot of money doing that," Wallace said.

But for travelers on a tight schedule, planning ahead is critical.

The average trip from the Fort Worth T&P Station to Terminal B at DFW airport is 53 minutes with trains departing every 30 minutes. The company told FOX4 it has no plans to add more frequent trains just yet.

Wallace says although he’s never had a problem, safety is the top concern he hears from people who say they don’t feel comfortable riding the train.

Trinity Metro says all of its TEXRail parking lots are monitored by security guards.

The goal is to give travelers a safe and cheaper option they may not have considered until now.

Reservations are not required, but you can make reservations and payments through the ACE Parking app.