Texas Gov. Greg Abbott will let his emergency order expire Thursday. The newest order allows some businesses to open again. Most are doing so with health precautions in place.

DALLAS - An emergency Texas order expires Thursday and the state can slowly begin to return to normal – if all goes well.

Gov. Greg Abbot said he will not extend his stay-at-home order. Instead, his newest order allows some businesses such as retail stores, restaurants, malls and movie theaters to open again at 25% capacity.

On the issue of testing, the governor said he is adamant about doing more. But he also points out that more testing will bring more positive COVID-19 cases.

Abbott believes it’s important to look at the number of positive cases relative to the number of people who are tested. He said earlier this month that ratio was 10%. Now it’s 5.5%.

Dallas hasn’t seen a drop in COVID-19 cases and Dallas County Judge Clay Jenkins has said he would prefer movie theaters and other businesses stay closed. The governor addressed that.

"What's important is for one all of us work to advise our residents to be as safe as possible in everything they do,” Abbott said. "Just because it's allowed doesn't mean you have to go do it. If you do go out you should continue the safe practices distancing yourself from others, wearing masks and things like that.” 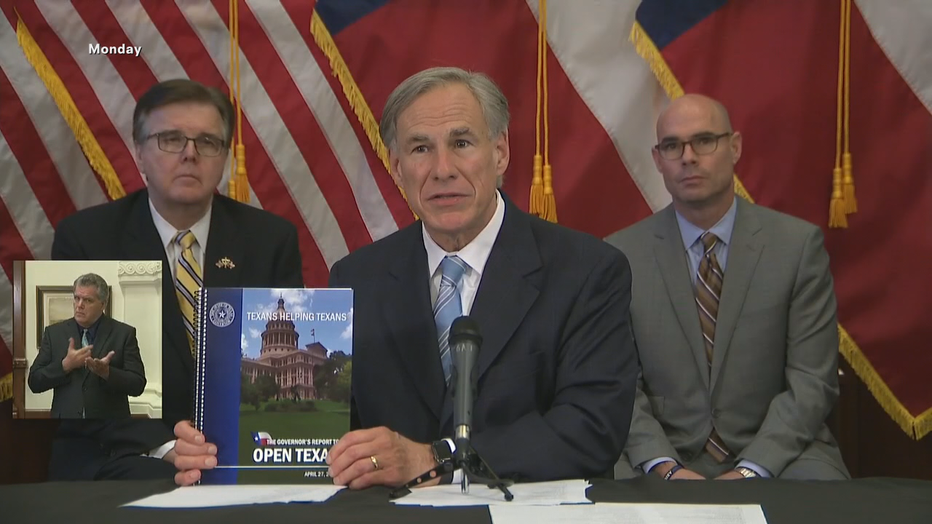 Many of the businesses that will be reopening are doing so with several health precautions in place.

Abbott also addressed a North Texas salon owner who opened her salon on Friday despite county and state restrictions.

The governor said his office is working with Shelley Luther, the owner of Salon a la Mode in Dallas, and trying to find ways she and other salons can open safely.

He also said the state isn’t going to force people to wear masks but he strongly recommends that people do.