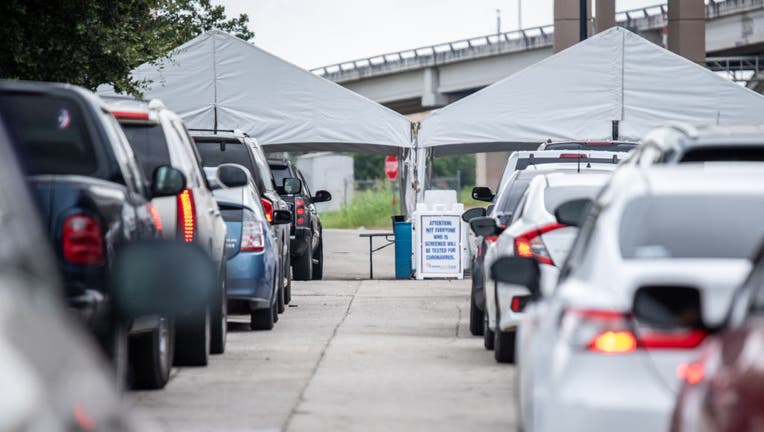 AUSTIN, TX - JULY 07: People sit in their cars and wait in line at a COVID19 testing center on July 7, 2020 in Austin, Texas. (Photo by Sergio Flores/Getty Images)

AUSTIN, Texas - A record number of people with the coronavirus were in Texas hospitals on Tuesday as the state also set a record for the number of new cases reported.

The number of people in Texas hospitals has continued to climb after topping 10,000 for the first time on Friday, and the state recorded 10,569 people hospitalized Tuesday as it tries to contain the spread in what has become one of America’s biggest hot zones.

Republican Gov. Greg Abbott has warned that the worst is yet to come in Texas. Hospitalizations and infection rates have soared in the aftermath of Abbott embarking on what had been one of the most aggressive reopenings in America.

Texas surpassed 10,000 new coronavirus cases in a single day for the first time last week and set a record Tuesday with 10,745 new cases. The new cases reported Tuesday now brings the state’s total to 275,058. The true number of cases, though, is likely far higher because many people have not been tested, and studies suggest people can be infected and not feel sick.

State health officials said there were also 87 more deaths reported in Texas, putting the total so far at 3,322.

For most people, the coronavirus causes mild or moderate symptoms, such as fever and cough that clear up in two to three weeks. For some, especially older adults and people with existing health problems, it can cause more severe illness, including pneumonia and death.

The record number of coronavirus cases and hospitalizations came as Texas voters also went to the polls Tuesday for the U.S. Senate primary runoff between two Democrats, congressional primary and other party runoffs. The runoff was originally slated for May, but Abbott pushed back the date in March as the virus began to take hold in the U.S., saying it would help keep people safe.

•  School employees concerned about returning to the classroom