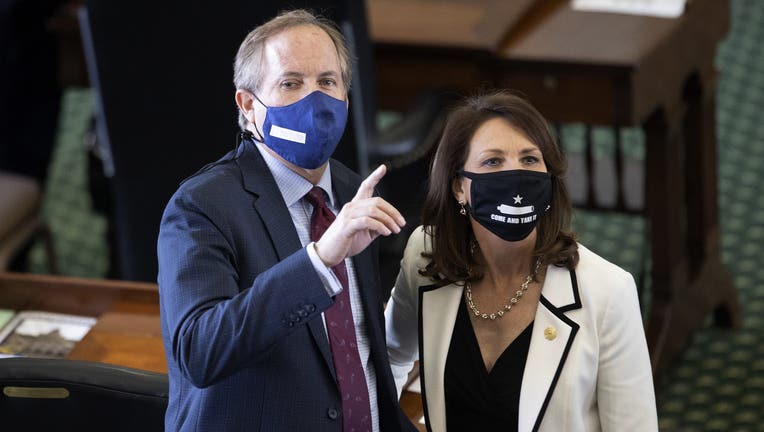 State Sen. Angela Paxton, R - McKinney, and her husband, Texas Attorney General Ken Paxton, look toward the Senate Gallery at the Capitol on the first day of the 87th Legislature on Jan. 12, 2021.

The Texas attorney general’s office is attempting to fight off efforts by four former aides to take depositions and issue subpoenas in their lawsuit claiming they were illegally fired after telling authorities they believed Attorney General Ken Paxton was breaking the law.

The agency is arguing that Paxton is "not a public employee," and thus the office cannot be sued under the Texas Whistleblower Act, which aims to protect government workers from retaliation when they report superiors for breaking the law.

In seeking reinstatement and other financial damages, the whistleblowers want to question Paxton under oath, as well as Brent Webster, his top deputy at the attorney general’s office, and Brandon Cammack, a Houston lawyer Paxton hired to investigate complaints made by Paul in what aides say was a favor to the donor. They also issued subpoenas to Paul’s company and a woman alleged to have been Paxton’s mistress.

The relationship between Paul and Paxton is friendly but remains murky. Paul revealed in a deposition last year that he had employed a woman at Paxton’s recommendation but not as a favor to him. The woman had a romantic relationship with Paxton, according to two people who said Paxton told them of the affair in 2018.

Now, the agency is asking a Travis County judge to quash subpoenas to the woman and World Class Capital Group, which Paul leads, as well as to fend off the depositions the whistleblowers are seeking.

Spokespeople for Paxton have not responded to questions about the woman and have claimed the aides were not fired out of retaliation.

"OAG [Office of the Attorney General] is doing everything it can to keep the public in the dark and prevent Ken Paxton from testifying under oath," said TJ Turner and Tom Nesbitt, attorneys for one of the whistleblowers. "But it’s worse than that. They are not just asking the court to prohibit discovery from the office and Ken Paxton. OAG is also asking the court to prohibit discovery from World Class and other third parties, even though the attorney who represents them both agreed to cooperate in the discovery process."

To defend the agency, taxpayers are paying attorney William Helfand $540 an hour, and $350 and $215 hourly, respectively, to a junior attorney and paralegal, their contract shows.

The whistleblowers sought to question Paxton, Webster and Cammack under oath as soon as next week. Michael Wynne, an attorney for Paul, accepted the subpoenas for both World Class and the woman, court documents show. She could not be reached for comment, and Wynne did not return a request for comment.

But in a filing last week, the attorney general’s office asked the judge to quash the depositions and the subpoenas, and prevent the whistleblowers from conducting any discovery.

"The OAG is doing everything they can muster to avoid having Ken Paxton answer basic questions under oath about the facts," said Carlos Soltero, an attorney for one of the whistleblowers.

Instead, the agency said, the Travis County judge should dismiss the case entirely on procedural grounds.

The Texas Whistleblower Act — the basis for the lawsuit — is designed to provide protection for public employees who, in good faith, tell authorities they believe their superiors are breaking the law. But the attorney general’s office claims the agency cannot be sued under the law because Paxton is an elected official.

Comparing Paxton’s authority to that of the president of the United States, the agency claimed that the attorney general had the right to fire the employees, despite their claims of retaliation.

"It appears that [Attorney] General Paxton is trying to get off on a technicality that doesn’t exist," he added.

Turner and Nesbitt, attorneys for one of the whistleblowers, also slammed the agency for trying to have the case tossed, saying "not content with merely breaking the law, now Attorney General Ken Paxton argues he is above it."

"The Office of the Attorney General claims that Paxton is so far above the law that he has a constitutional right to demand that his most senior employees support his unlawful conduct, and that he can fire and slander with impunity any employee who doesn’t. This is shameful," they added. The motion is "frivolous" and only designed to delay the case, they claimed.

Spokespeople and attorneys for the attorney general’s office did not return requests for comment.

"Texas laws protecting whistleblowers don't apply to Attorney General Ken Paxton, his agency argues in bid to quash lawsuit" was first published at https://www.texastribune.org/2021/01/14/ken-paxton-texas-whistleblower-lawsuit/ by The Texas Tribune. The Texas Tribune is proud to celebrate 10 years of exceptional journalism for an exceptional state.