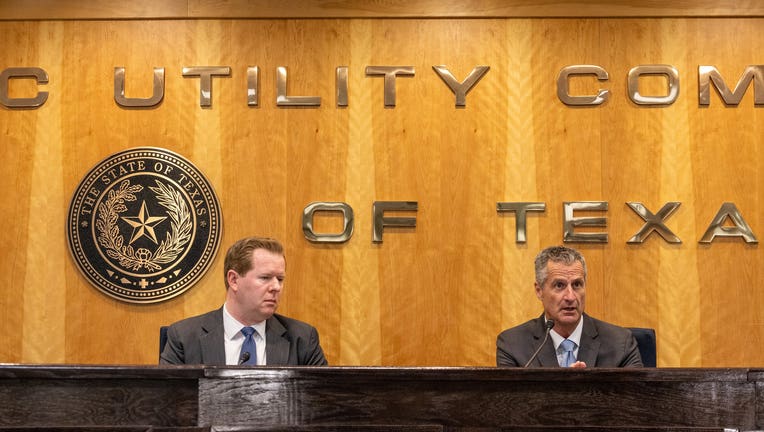 From left: Peter Lake, chair of the Public Utility Commission of Texas, and Brad Jones, then-interim president and CEO of the Electric Reliability Council of Texas, speak at a May 17 press conference about the state power grid.  (Credit: Jordan Vonderhaar / The Texas Tribune)

AUSTIN, Texas - "Texas lawmakers ask state agency to delay power market redesign until after 2023 legislative session" was first published by The Texas Tribune, a nonprofit, nonpartisan media organization that informs Texans — and engages with them — about public policy, politics, government and statewide issues.

In a letter last week and in a committee meeting Monday, Texas lawmakers from both the House and Senate have asked the Public Utility Commission, which regulates the state’s electricity market, to hold off on its planned electricity market redesign until the Legislature can evaluate it.

After the power grid crisis during the February 2021 winter storm that left millions of Texans in the dark during dayslong power outages and caused hundreds of deaths, the Texas Legislature ordered the PUC to make several major changes, including requiring power plants to better prepare for very cold conditions and implementing a "reliability standard" for the state’s electricity market.

The PUC’s favored proposal would leave the basics of the market unchanged — a supply-and-demand model that relies on price and gives the biggest financial benefits to generators that can produce the cheapest power. But it would add financial rewards for power plants that can quickly produce electricity when the grid is at its most stressed, such as during very hot or very cold days.

Leaders from the Public Utility Commission of Texas and ERCOT say upgrades to the state's power grid have it ready for the cold this winter.

The rule, if implemented, would punish those who failed to produce the power they promised with financial penalties.

The agency has already implemented the "winterization" regulation the Legislature passed in 2021. Now, officials are working to determine how the Texas power market will create and meet the reliability standard also mandated by Senate Bill 3.

During PUC Chair Peter Lake’s testimony before the House State Affairs Committee on Monday, lawmakers questioned whether the proposal would actually achieve what many Republican members appeared to most want, and what Lt. Gov. Dan Patrick has already demanded: a guarantee that more natural gas plants will be built in Texas.

"Yes, sir," Lake responded. If the agency completes its rule-making as scheduled, Lake said during the hearing, he expects that the plan would be fully implemented by 2026.

Last week, senators from the Business and Commerce Committee, after hearing similar testimony from Lake, wrote a letter to PUC’s commissioners expressing their concern that the PUC’s proposal may fail to meet the requirements of Senate Bill 3 and would not guarantee that new generation will be built "in a timely and cost effective manner."

Also last week, Patrick held a press conference in which he called for legislation that would cause additional natural-gas-fired power plants to be built in addition to the PUC’s proposed market changes. He called renewable sources of energy "a luxury."

The fastest-growing sources of power in fast-growing Texas are wind turbines and solar panels, which typically don’t provide as much power during the winter months as during the summer.

"Demand is growing at a pace that is outpacing [quickly available power] generation in the state," Pablo Vegas, CEO of the Electric Reliability Council of Texas, which operates the state power grid, told lawmakers on Monday. He pointed out that even with the winterization requirements, ERCOT’s own analysis still points out that there are some extreme weather scenarios that would lead to the grid not having enough power to avoid rolling blackouts.

With the state’s rapid population growth, "this situation is getting more difficult and more challenging every year," he said.

During a press conference last week, Vegas and Lake both emphasized that the proposed changes would be "technologically agnostic" and would not prioritize one source of power generation over another. Instead, the PUC plan would prioritize technology that can quickly switch power on and off throughout the grid to balance drops in renewable power generation when the sun doesn’t shine or wind doesn’t blow. In Texas, that would largely mean new natural-gas-fired plants.

Lake declined to respond directly to the letter from senators during the House hearing Monday but said that the agency is "grateful for feedback."

Texplainer: Why does Texas have its own power grid?

Lake said many of the changes, including better weatherization, have already improved the grid’s performance and that without the new regulations directed by the Legislature in 2021, the state grid would have experienced "emergency condition or blackout" eight times in the last 18 months.

Hunter and Rep. John Smithee, R-Amarillo, repeatedly questioned Lake about whether the PUC’s vote on the market redesign — which is expected in January after the public has an opportunity to comment on the plan — would be binding and whether the Legislature would have the opportunity to make changes to it.

Lake said that the agency was simply moving forward with what the Legislature asked it to do last year with Senate Bill 3 but later said, "We don’t plan on operationalizing any market designs until we receive guidance from the Legislature."

Rep. Richard Peña Raymond, D-Laredo, said he doesn’t understand why lawmakers in the Senate asked the PUC to hit the brakes on its proposal. "Seems to me we asked you to do something, and you’re doing it," he said.

Michele Richmond, the executive director for Texas Competitive Power Advocates, an industry group that represents large power companies, said her members were prepared to build new gas-fired power plants in Texas between 2024 and 2026 capable of producing 4,600 megawatts of power "if the Legislature does not inhibit the implementation" and the PUC’s rule-making process continues as planned.

Companies are unlikely to begin investing in building new plants until the law is clear, she said.

Lake said that right now, according to an analyst’s report commissioned by the PUC, the Texas grid can be expected to experience rolling blackouts at least one day per year on average. The PUC’s proposal aims to reduce that risk to once per decade.

"Any blackouts expected each year is unacceptable," Lake said, pointing out that many coal- and natural-gas-fired power plants, which can typically produce power consistently during times when renewables cannot, are being shut down. Many are no longer cost competitive.

"The threat is real, and it’s happening," he said. "We’re losing megawatts, but we have more people, more businesses."

Disclosure: Texas Competitive Power Advocates has been a financial supporter of The Texas Tribune, a nonprofit, nonpartisan news organization that is funded in part by donations from members, foundations and corporate sponsors. Financial supporters play no role in the Tribune’s journalism. Find a complete list of them here.

This article originally appeared in The Texas Tribune at https://www.texastribune.org/2022/12/05/texas-electricity-market-redesign-puc-lawmakers/.