DALLAS - The situation with COVID-19 hospital cases in North Texas is growing more urgent by the day.

Dallas County recorded an average of 1,009 new cases each day over the last three days.

Younger people ages 18 to 49 make up the biggest increase in hospital cases, and the vast majority are unvaccinated.

There is also a sharp rise in pediatric hospitalizations and a dramatic shortage of intensive care beds for children.

In Tarrant County, the COVID hospitalization rate is above 18%, which were levels we last saw in February.

Parkland Hospital’s Chief Medical Officer Dr. Joseph Chang says he currently has so many job openings his nursing managers can no longer actively recruit. He says the hospital has had to temporarily close certain practice areas in order to divert those staffers to help treat covid patients. 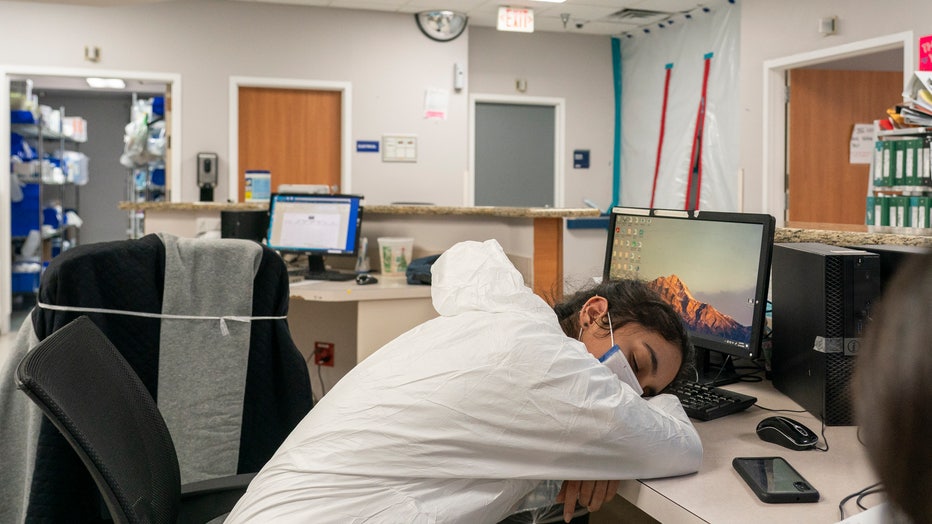 It’s a problem for hospitals across the state.

Dr. Chang testified before the State Senate Committee on Health and Human Services on Tuesday. He says he currently has 470 open nursing positions at Parkland he cannot fill as COVID hospitalizations continue to rise.

Part of the problem, he says, is competing with other hospitals for the same dwindling talent pool.

"Well, your sister agency is going to offer X. Well, I guess we have to offer more," he said.

In order to handle the load of COVID patients, Dr. Chang says he had to temporarily close certain clinics that provide primary care, amongst other things.

"I had to make the decision two weeks ago to transfer pregnant patients to other hospitals because staffing, not because I didn't have beds," he said.

"We can't compete with private hospitals," he said.

Dr. Porsa says his two hospitals have 133 open nursing positions. A staffing agency told him on Monday the going rate is $226 per hour. Pre-pandemic, the hourly rate for a traveling RN was between $65 and $120

A week after the state denied hospital requests for support staff, Gov. Abbott on Monday ordered DSHS to go ahead and help out.

"I believe in 3 to 5 days, you're going to see nurses in fields and hospitals working," said Texas Division of Emergency Management Chief Nim Kidd.

He told the committee he'll use the state data to determine where the critical need is and fill those openings first.

Rural communities are a priority.

The state will also open additional antibody infusion centers. One will be in Fort Worth.

The state's top doctor says 97% of COVID patients in Texas hospitals are unvaccinated.

Pediatrics and those age 30 to 49 are of greatest concern.

"It is clear that the delta variant is spreading very fast. It's quite dangerous," said DSHS Dr. John William Hellerstedt. "And it’s now producing the need for hospitalization in, if you will, relatively younger age groups."

Harris Health is offering nurses a $10,000 recruiting fee and another $10,000 bonus to try and entice them from going elsewhere. Still, the CEO says oftentimes it’s not enough.

The situation with COVID-19 hospital cases in North Texas is growing more urgent by the day.

The Texas Hospital Association hopes the state will send reinforcement into regions being hit the hardest.

The governor also asked hospitals to help out by canceling elective surgeries.

Carrie Kroll with the Texas Hospital Association says a decision like that is complicated.

"There is hesitation to turning services off entirely," she said. "It will look different by hospital, but they're doing that specifically to free up staff. But keeping in mind the fact that they really need to be available to treat the emergent needs in their communities."

Chief Kidd is still wanting counties to use some of their federal dollars to help pay for extra hospital staffing.

Dallas and Tarrant counties just recently received a combined $800 million in federal aid from the last COVID package passed by Congress this year.