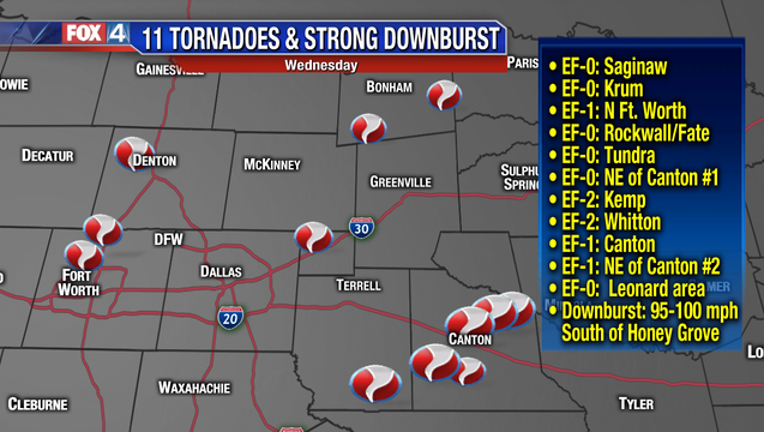 With the 11 confirmed tornadoes that hit North Texas on Wednesday, the Lone Star State has now seen more than 140 tornadoes so far this year, which is more than any other state has recorded in 2019.

This year has seen a very active tornado season, with several states already having more tornadoes than their yearly averages.

Over the past 30 years, Texas has averaged 140 tornadoes a year, according to the National Weather Service.

And this year, there have already been 143 tornadoes in the state, as of May 30, and tornado season isn’t over yet.

On average, North Texas gets about 25 tornadoes a year, and this area got nearly half of that total during Wednesday’s storms.

There have been almost 3X as many tornadoes this year in Texas compared to last year, when there were only 52 recorded.

But it hasn’t been as bad as 2015, when there were 228 tornadoes recorded in Texas, including an outbreak that killed eight people here in North Texas.

Other states in tornado alley have also been hit hard by tornadoes. Kansas and Missouri have recorded 87 tornadoes in 2019, while there have been 85 tornadoes in Mississippi, and 83 in Oklahoma.

In total, there have been 1,008 tornadoes recorded across the United States this year, and we could surpass the average of 1,141 tornadoes that hit the U.S. each year.