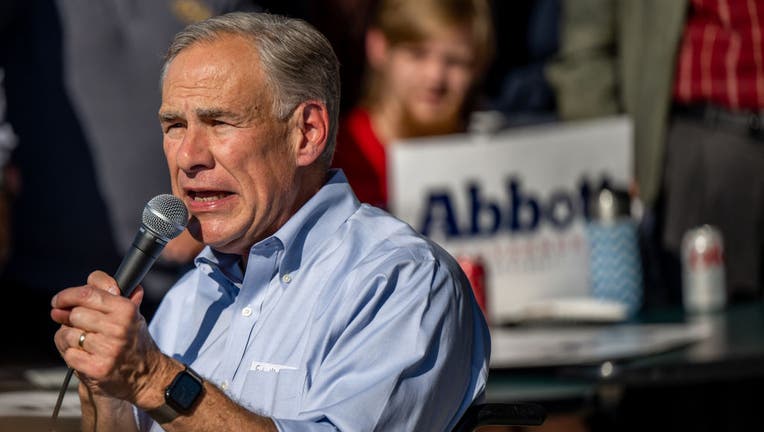 KATY, TEXAS - OCTOBER 27: Texas Gov. Greg Abbott speaks during a 'Get Out The Vote' rally at the Fuzzy's Pizza & Italian Cafe on October 27, 2022 in Katy, Texas. With less than two weeks away from the midterm election, Gov. Greg Abbott continues

Gov. Greg Abbott said he will seek a mandatory minimum sentence of at least five years in prison for human smuggling.

"I’m getting damn tired of Texas residents smuggling people into our country illegally," Abbott wrote in a tweet Sunday night. "I will be seeking a mandatory minimum of at least five years in prison for anyone caught committing this crime."

Abbott made his remark Sunday in response to another tweet that said the Starr County district attorney fired his crime victims coordinator after she was arrested in connection to an alleged smuggling scheme, according to a local news report.

Currently, under the state’s penal code, human smuggling is a third-degree felony punishable by imprisonment of no fewer than two years but not more than 10 if a person is found guilty. Additionally, a person found guilty could be fined up to $10,000, according to the penal code.

Human smuggling received fresh scrutiny and outrage in June when 53 migrants died after being trapped in a tractor-trailer that was found near Lackland Air Force Base in San Antonio.

Federal authorities indicted two Texas men for their roles in the tragedy, which authorities have described as the deadliest migrant smuggling case in U.S. history. The men face charges of transporting undocumented migrants in a way that resulted in serious injury, death and the jeopardizing of lives; they could be sentenced to life in prison or to the death penalty if convicted.

For more info, head to the Texas Tribune