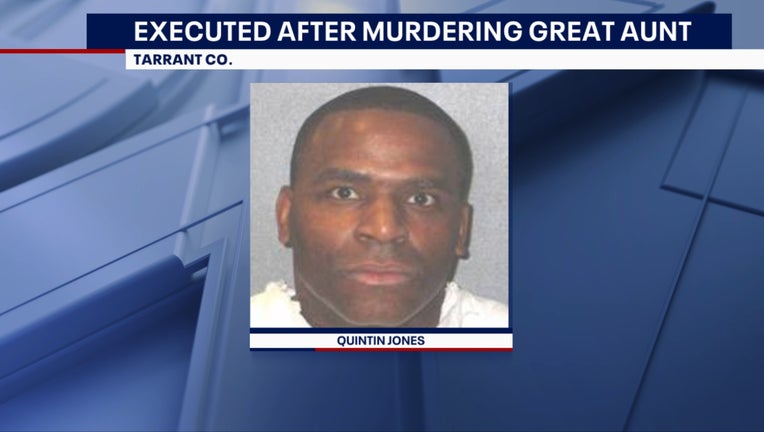 HUNTSVILLE, Texas - A Fort Worth man convicted of fatally beating his 83-year-old great aunt more than two decades ago was executed Wednesday evening without media witnesses present because prison agency officials neglected to notify reporters it was time to carry out the punishment.

Quintin Jones received the lethal injection at the state penitentiary in Huntsville for the September 1999 killing of Berthena Bryant, agency spokesman Jeremy Desel said about 30 minutes after Jones was pronounced dead.

Desel never received the usual phone call from the Huntsville Unit prison to bring reporters from The Associated Press and The Huntsville Item to the prison. He and the media witnesses were waiting in an office across the street.

"The Texas Department of Criminal Justice can only apologize for this error and nothing like this will ever happen again," he said.

He said the execution, the first in Texas in nearly a year, included a number of new personnel who have never participated in the process.

"Somewhere in that mix there was never a phone call made to this office for me to accompany the witnesses across the street into the Huntsville Unit," Desel said.

The previous 570 executions carried out by Texas since capital punishment resumed in 1982 all had at least one media witness.

"My assumption is there will be a thorough investigation into how this all transpired and what was missed that allowed it to happen, and I expect that investigation is already underway," Desel said.

There were no unusual circumstances with the execution itself, he said, relying on accounts from agency officials who were inside the death chamber.

Jones made a brief statement thanking his supporters and expressing love for them.

"I was so glad to leave this world a better, more positive place," he said, according to a prison transcript of his remarks. "It's not an easy life with all of the negativity.

"I hope I left everyone a plate of food full of happy memories, happiness and no sadness."

As the lethal dose of pentobarbital was administered, he took four or five deep breaths followed by "a long deep snore," Desel said.

Less than an hour before the scheduled punishment, the U.S. Supreme Court declined to halt the 41-year-old man's execution.

Prosecutors said after Bryant refused to lend Jones money, he beat her with a bat in her Fort Worth home then took $30 from her purse to buy drugs.

Some of Bryant’s family members, including her sister Mattie Long, had said they didn’t want Jones to be executed. Jones is Long’s grandnephew.

The board denied Jones’ clemency petition on Tuesday and Gov. Greg Abbott didn’t go against that decision and also declined to delay the execution. Abbott has granted clemency to

On Wednesday, Jones’ attorney filed a civil rights complaint against the board, alleging race played "an impermissible role" in its denial of Jones’ petition. Jones’ attorney argued the case was similar to that of Whitaker’s and the only difference was that Whitaker is white and Jones was Black. U.S. District Judge George C. Hanks Jr. dismissed the complaint, writing that Jones didn’t present direct evidence of his allegation.

In his final appeals, Jones’ attorney, Michael Mowla, argued that Jones was intellectually disabled and that his death sentence was based on since discredited testimony that wrongly labeled him as a psychopath and a future danger. Mowla also said Jones’ history of drug and alcohol abuse that started at age 12 and physical and sexual abuse he suffered were never considered at his trial.

In court documents filed last week, prosecutors argued the death sentence was justified because Jones had a violent history, including assaulting teachers and participating in two other murders.