Democrats from the Texas House are meeting with their federal counterparts in Washington, D.C. this week to discuss election legislation.

Democrats from the Texas House are meeting with their federal counterparts in Washington, D.C. this week to discuss election legislation.

The legislators walked out of the Texas Capitol late in the legislative session to prevent a new election bill from passing.

The controversial voting bill in Texas has the votes to pass in an eventual special session. Texas Democrats are hoping Congress will pass legislation to ultimately block it.

A delegation of Texas Democrats was invited to the nation’s capital Tuesday, getting praise from House Speaker Nancy Pelosi (D-California) for their staged walkout weeks ago during the 87th legislative session.

"The whole country was inspired when it took place," she said. "Each and every one of them have been champions for our democracy." 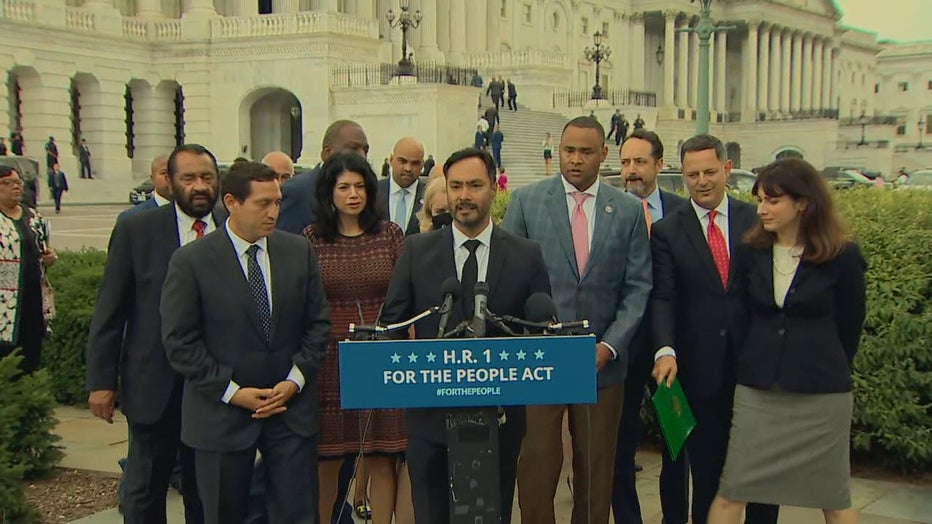 "We know when they talk about preserving the purity of the ballot box., we know exactly what they are talking about," said State Rep. Nicole Collier (D-Fort Worth).

While SB7 was technically defeated because of a lack of a quorum when Democrats discretely walked out of the session in protest, it still has the votes to pass in the upcoming special session.

"When you look at SB7 and the fact that I am an African American male, I don't think that it suppresses my ability to be able to vote whatsoever," he said.

The delegation met with Speaker Pelosi and other lawmakers, urging them to pressure the Senate to pass HR1, also known as the ‘For The People Act.’ It would require federal preclearance for states like Texas when it comes to changes to voting laws.

"This is very disconcerting and everyone in the state of Texas should not want to see a federal government take over the elections here in the United States of America," West said.

Democrats are hoping a federal law passes before Texas lawmakers return to take on SB7 again.

Gov. Greg Abbott has not said when he will call lawmakers back to vote on SB7. Texas Democrats are hoping HR1 passes the Senate this summer.