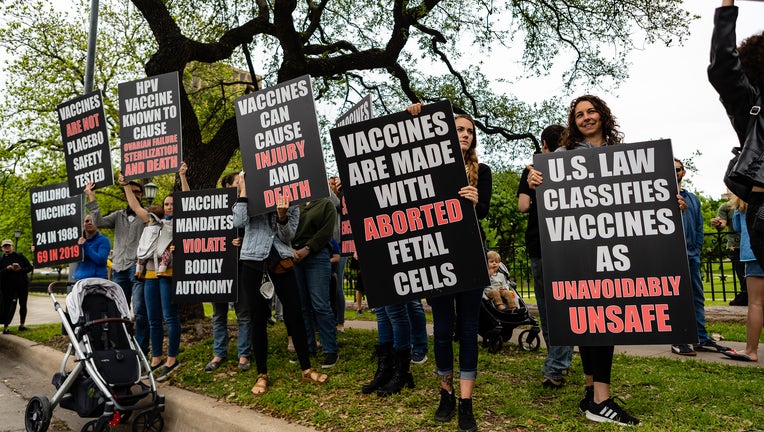 Anti-vaccination protestors at the the Capitol in Austin on April 18, 2020. (Jordan Vonderhaar for The Texas Tribune)

AUSTIN, Texas - Texas-based anti-vaccine organization Informed Consent Action Network was among five anti-vaccine groups that collectively received more than $850,000 in federal loans from the Paycheck Protection Program, the Washington Post reported Monday. The organization received $166,000 in May 2020, according to founder Del Bigtree.

"Vaccine hesitancy" or "vaccine skepticism" poses a significant and ongoing challenge for health authorities trying to overcome mistrust within communities of color, by the anti-vaccine crowd and general uncertainty nationwide. Doctors and scientists say the coronavirus vaccines currently available in the United States are safe and effective.

"At a minimum, it’s a mixed message from the government," said Timothy Callaghan, an assistant professor in the Department of Health Policy and Management at the Texas A&M University School of Public Health. "Those individuals who are hesitant are going to be looking to various pieces of information to help them make this decision...and if one of the key pieces of information coming out is the government funding anti-vaccine groups, it could send a signal to these individuals that maybe they shouldn't be vaccinating," he told The Texas Tribune.

The Austin-based nonprofit has more than 43,000 followers on Facebook and regularly posts information questioning the safety of the coronavirus vaccines. Bigtree’s online anti-vaccine talk show was penalized by Facebook and YouTube last year for violating misinformation policies and downplaying the severity of the pandemic.

Facebook has cracked down on several of the groups that received the PPP loans, a spokesperson for the social network told the Post. Informed Consent Action Network’s page, labeled with a link to Facebook’s Coronavirus Information Center, is not being recommended to users by the company’s algorithms, the Facebook spokesperson told the Post.

In an interview, Bigtree said his organization spent the funds on employees’ salaries. "Just like everybody else, we were trying to keep employees employed instead of putting them on unemployment," Bigtree told The Tribune. He described the effect of Facebook’s anti-misinformation efforts on his organization’s content as "censorship" and a "dangerous" sign of the times.

Recent polling shows vaccine skepticism poses a public health threat in Texas, where Republican elected officials have largely echoed President Donald Trump’s minimizing of the pandemic, said James Henson, head of the Texas Politics Project at the University of Texas at Austin. An October University of Texas/Texas Tribune Poll found that if a vaccine against the coronavirus became available at a low cost, 42% of Texas registered voters said they would try to get it and 36% said they wouldn’t — a significant drop from the 59% who said in a UT/Texas Politics Project poll in June that they would get vaccinated against the disease.

That anti-vaccine groups received PPP funds "sticks out as being really at odds with public health, but the bigger problem here is that there has been a pronounced lack of consistent messaging on the safety, effectiveness and necessity of the vaccine from both national and statewide leaders, in particular Republicans," Henson said. "That’s left a huge vacuum where there should be unambiguous messaging about the vaccine."

Disclosure: The Texas Tribune, as a nonprofit local newsroom and a small business, applied for and received a loan through the Paycheck Protection Program in the amount of $1,116,626.

Disclosure: Facebook, Texas A&M University and University of Texas at Austin have been financial supporters of The Texas Tribune, a nonprofit, nonpartisan news organization that is funded in part by donations from members, foundations and corporate sponsors. Financial supporters play no role in the Tribune's journalism. Find a complete list of them here.

"Texas-based anti-vaccine group received federal bailout funds in May as pandemic raged" was first published at https://www.texastribune.org/2021/01/18/texas-coronavirus-vaccines-ppp/ by The Texas Tribune. The Texas Tribune is proud to celebrate 10 years of exceptional journalism for an exceptional state.