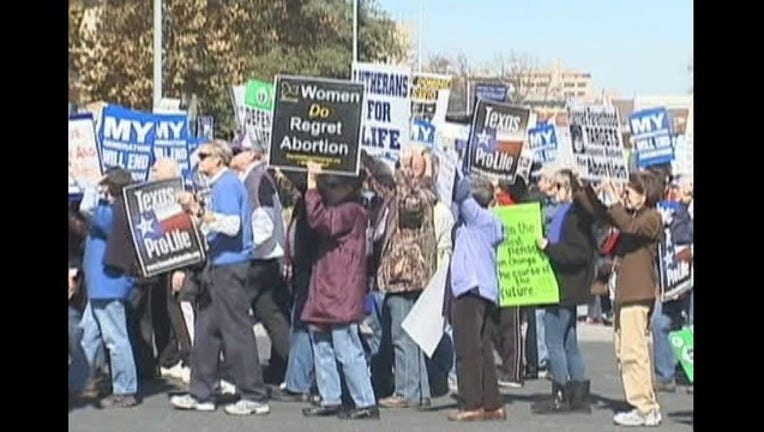 George P. Bush and Texas first lady Cecilia Abbott made a large anti-abortion rally at the Capitol on Saturday their first headlining events of 2015 as the two political newcomers from familiar Republican families begin putting different faces on Texas conservatism.

The front-and-center billing given to Abbott, less than a week after husband Greg Abbott was sworn in as governor, added to expectations that she could have a more public presence than her predecessor, Anita Perry, who largely avoided the spotlight during her 14 years in the governor's mansion.

Cecilia Abbott played more stand-in than star to a crowd of about 1,500 at the Texas Rally for Life, which has grown into a big stage for Republican leaders. She read a letter from her husband that thanked anti-abortion supporters for backing legislation that has made Texas home to some of the toughest abortion restrictions in the U.S.

Some laws are on hold while Texas awaits a ruling from a federal appeals court in New Orleans. If the state prevails, Texas will be left with eight abortion facilities in the nation's second-most populous state.

"Because of you, Texas leads the nation in defending those who do not have a voice," Cecilia Abbott said.

The granddaughter of Mexican immigrants, Abbott is the first Hispanic first lady in Texas history. Bush, the 38-year-old son of former Florida Gov. Jeb Bush whose mother is from Mexico, also brings a splash of youth and diversity for Texas Republicans who are eager to reach younger and Hispanic voters.

"It's not just about what we say about this issue, it's what this issue says about us as a people and as Texans," Bush said.

Texas had more than 40 abortion clinics in 2012. Only 17 were still in business when the state earlier this month argued to the 5th U.S. Circuit Court of Appeal that Texas should be allowed to force abortion clinics to meet hospital-level operating standards.

Smaller clinics that have stayed opened despite other new mandates -- such as requiring their doctors to have hospital admitting privileges -- say being forced to make millions of dollars in upgrades would be the final blow.

Texas has argued in court that the laws are about protecting women's health, but at the rally, conservatives were candid about their aim to end abortion.

Texas Democrats have lost their biggest abortion-rights crusader in the state Capitol now that former Sen. Wendy Davis, who temporarily blocked passage of the newest abortion laws with a nearly 13-hour filibuster in 2013, is gone after badly losing her run for governor.

On the other side of the Capitol on Saturday, Democrats urged a far smaller crowd of abortion-rights supporters not to give up.