WASHINGTON - Police cleared out an encampment overnight near the White House and stopped protesters from establishing an autonomous zone in downtown D.C. 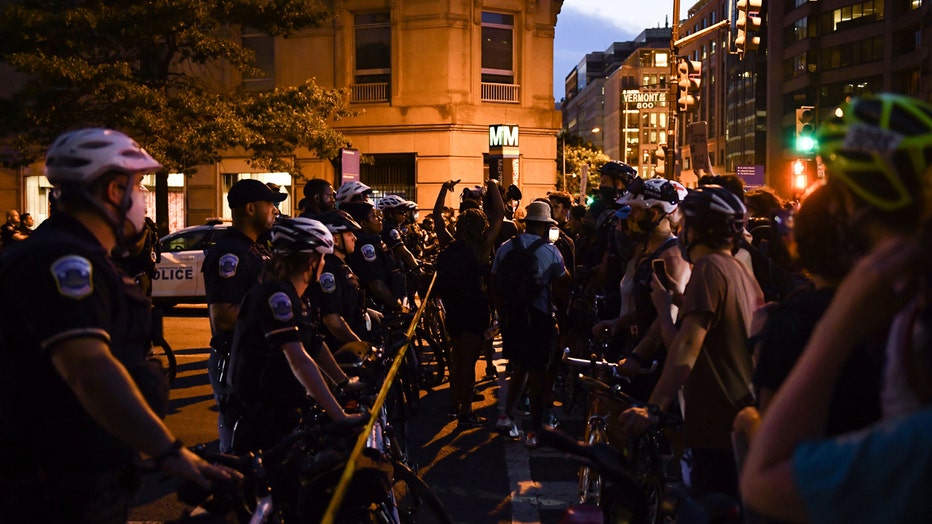 FOX 5's Melanie Alnwick was at the area near Black Lives Matter Plaza Wednesday morning where the streets had been cleared of tents and cleaned of debris. Protest signs that had been fastened to fencing had also been removed.

Alnwick said, just hours earlier, demonstrators set off fireworks, started fires and burned an American flag. Protesters tried to set up barricades across H Street -- in between St. John's Episcopal Church and Lafayette Square – but were pushed back by officers.

Protesters in the nation's capital set the American flag on fire overnight into Wednesday during protests near the White House. Video shows the flag being sprayed and lit on fire in the area of Lafayette Square.

Most of that area had been shut down to pedestrian and vehicle traffic Wednesday morning. It is unclear when the area will reopen.

During protests earlier this week, graffiti appeared on the columns at historic St. John’s Church referring to “BHAZ” – or, “Black House Autonomous Zone.”

On Tuesday night, the Rt. Rev. Mariann Budde, Bishop of the Episcopal Diocese of Washington, released the following statement to FOX 5:

"Pillars can be repainted. Buildings can be rebuilt. Black and brown people killed by police cannot be brought back from the dead. The damage of property is inconvenient, costly, and worst of all, serves to deflect our collective attention from what's most important.  I am resolutely focused on ending police brutality and murder, and the societal indifference to gross racial inequities that are fueling widespread public protest."