AUSTIN, Texas - After spending a day being slammed by TV pundits and fellow conservatives for describing last year’s U.S. Capitol insurrection as a "violent terrorist attack," U.S. Sen. Ted Cruz walked back his comments on Thursday.

The Texas Republican attempted to clarify his intent on FOX News program "Tucker Carlson Tonight," calling his own words "sloppy" and "frankly dumb." Cruz insisted he was referring only to the rioters who attacked police during the breach of the historic building.

"For a decade, I have referred to people who violently assault police officers as terrorists. I’ve done so over and over and over again," Cruz said Thursday.

He then tweeted a clip of his appearance.

His appearance came one day after Carlson lambasted the junior Texas senator for his choice of words during a Wednesday U.S. Senate committee hearing about the oversight of the Capitol Police during the 2021 riot. During that hearing, Cruz acknowledged the "solemn anniversary" of what he called a "violent terrorist attack on the Capitol where we saw the men and women of law enforcement … risk their lives to defend the men and women who serve in this Capitol."

The mob — made up of President Donald Trump supporters attempting to interrupt certification of the 2020 election — attacked police officers and caused millions of dollars of damage to the Capitol. Lawmakers and staff inside hid in fear for their lives as protesters breached the building carrying zip ties and wearing tactical gear.

Cruz was objecting to the certification of Arizona’s election results at the moment the Capitol was overrun. He was among several Texas Republicans who tried to cast doubt on President Joe Biden’s victory over Trump, who continues to peddle baseless claims of widespread voter fraud.

Many conservatives have spent the past several months downplaying the seriousness of the Capitol attack, which led to thousands of injuries and five deaths. About 140 officers were injured, and two officers involved in the response have died by suicide, according to a report in the New York Times.

"What the hell’s going on here?" Carlson said. "You’re making us think maybe the Republican Party is as worthless as we suspected it was. That can’t be true. Reassure us, please, Ted Cruz." 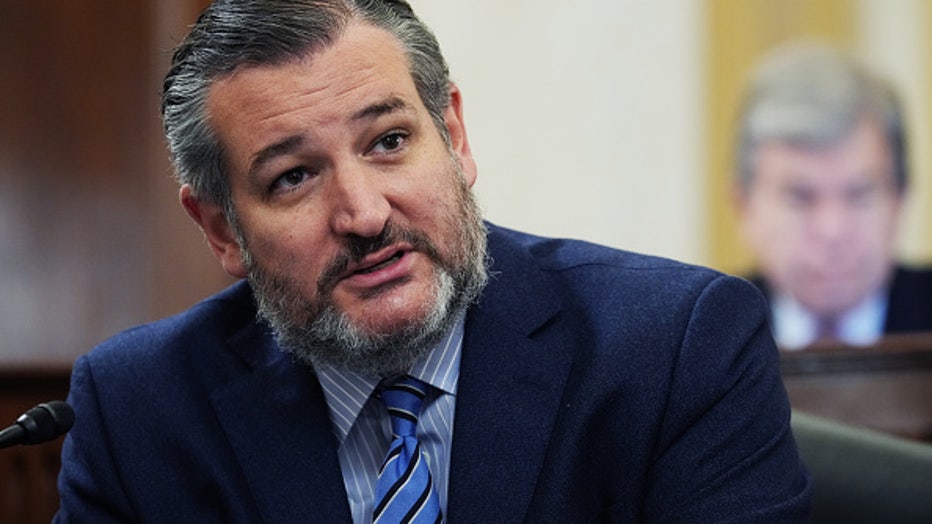 On Thursday, Cruz said he asked to come on Carlson’s show, so he could better explain himself. Cruz said he understood why people were angry at his use of the word "terrorist" but insisted that he would never use the same word that "Democrats and the corporate media have so politicized" to describe the "patriots" that were at the Capitol that day to protest the results of the presidential election.

At the time of the breach, Cruz argued, he was asking for Congress to investigate potential voter fraud in accordance with the law.

"It would be ridiculous for me to be saying that the people standing up and protesting to follow the law were somehow terrorists," he said. "I was talking about people who commit violence against cops."

Democrats and the media, Cruz said, "are trying to paint everyone as a terrorist, and it’s a lie."

A year ago, on the floor of the Senate, Cruz said he was "not arguing for setting aside the results of the election," but he was objecting because of concerns about how many Americans believed fraud had occurred.

When The Texas Tribune asked this week whether Cruz believed the 2020 election was legitimate, his office did not respond. Nor did he address his opinion on the legitimacy of the election on Thursday.

Disclosure: New York Times has been a financial supporter of The Texas Tribune, a nonprofit, nonpartisan news organization that is funded in part by donations from members, foundations and corporate sponsors. Financial supporters play no role in the Tribune's journalism. Find a complete list of them here.