The state's website tracks the COVID-19 numbers in Texas schools. An Excel file posted Thursday showed the case breakdown by district before it was later removed.

DALLAS - The state's first breakdown of COVID-19 cases by school district was abruptly taken offline with no explanation.

The previously published data showed six of the ten school districts with the highest case counts are in North Texas.

The online resource is supposed to help parents and faculty track COVID cases at each school district.

It took several calls and emails to get a response after the very first report published Thursday suddenly disappeared.

The state's website tracks the COVID-19 numbers in Texas schools. An Excel file posted Thursday showed the case breakdown by district before it was later removed.

A spokeswoman said: "We identified issues with the school district data file that was posted yesterday so we pulled it down. We are working with tea to resolve the issues and a new file will be posted once we get them resolved."

Again, no specifics were provided about what kind of issues were discovered.

According to the state's previously published numbers, the districts with the highest case counts in North Texas were as follows:

It is important to note that compared with each district's enrollment, the number of cases are a small fraction of one percent. 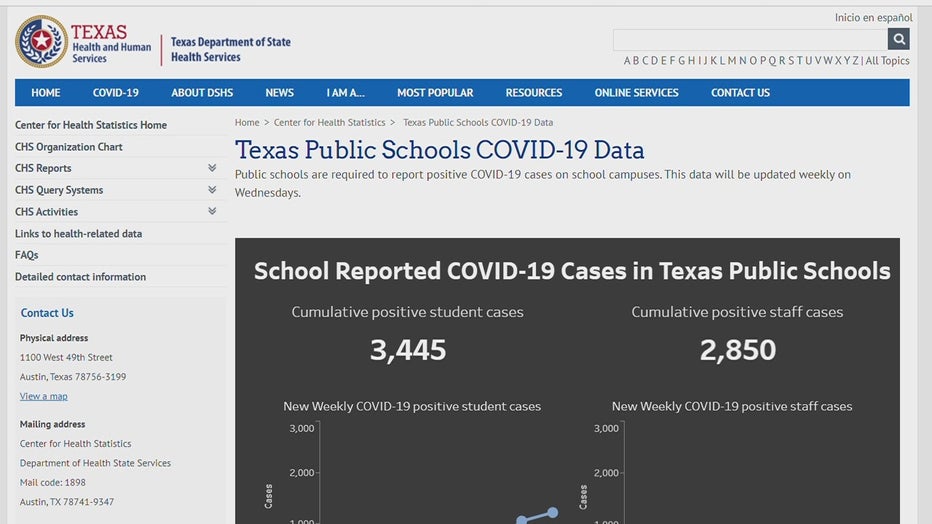 Richardson ISD Superintendent Dr. Jeannie Stone told parents in a video update that she needs their help to keep cases down.

“I was with a group of high school students at lunch just today who asked me what could be done about the number of parties and get togethers where social distancing and masks are not happening. They were concerned and asked me what could be done about it,” Dr. Stone said. “They know this could bring risk into their schools and impact if they get to play volleyball or perform on Friday night with the band or even continue to go to school in person.”

Dr. Stone said it is up to parents to follow precautions outside of school to keep their kids safe in school.

The overall number of cases in Texas schools dropped by 33 for the week ending Sept. 20 compared to the previous week.

Hundreds of thousands of students in several of the state's largest districts will be returning to school in the coming weeks in cities like Dallas, Fort Worth and Houston.