Brigham Young University-Idaho administrators believe that students aimed to get infected by the coronavirus so that they could get paid for donating plasma that contains COVID-19 antibodies.

LONDON - A new study of hundreds of thousands of people across England suggests that antibody immunity following COVID-19 infection could wane over time.

But in response to the findings, some experts not involved in the large study said worries about it could be overblown.

Researchers from Imperial College London analyzed results of finger-prick tests carried out between June 20 and September 28 by 365,000 randomly selected adults. They found that the number of people testing positive for COVID-19 antibodies dropped from 6% to 4.4% in just over three months. 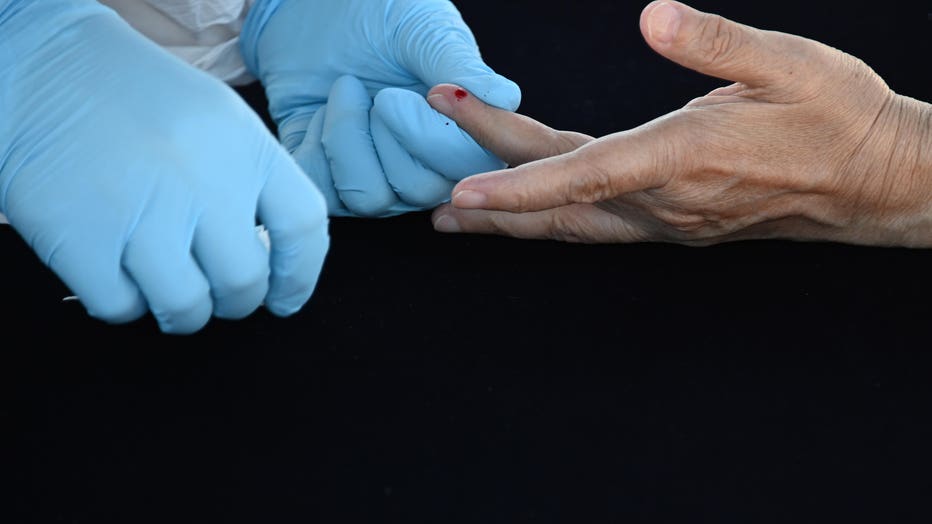 A file image shows a person undergoing a finger prick blood sample as part of a coronavirus antibody test on July 26, 2020 in San Dimas, California. (Photo by ROBYN BECK/AFP via Getty Images)

The immune system naturally produces antibodies, which are proteins that are critical for fighting and clearing the virus out of the body. This particular study tested for IgG antibody rates, though there are several different types.

“It remains unclear what level of immunity antibodies provide, or for how long this immunity lasts,” Elliott added.

The researchers found this decline across age groups and geographic locations in England. But they did not observe this trend in health workers, specifically, which they suggested could indicate repeated or higher initial exposure to the virus.

The decline in COVID-19 antibodies was largest in people age 75 and older, compared to younger participants in the study. The trend was also noticed in people with suspected rather than confirmed COVID-19 infection, indicating that the antibody response varies by age and with the severity of illness, the authors said.

And while the study analyzed IgG antibody rates, the tests were not designed to detect other types of antibodies, according to CNN.

The findings, called the Real Time Assessment of Community Transmission (REACT) study, were published in a pre-print report and have not yet been peer-reviewed.

In response to the study, some experts called worries to these findings overblown. Scott Hensley, an immunologist at the University of Pennsylvania, told the New York Times that it is normal for levels of antibodies to decline after the body clears an infection.

The immune system has a capacity for memory and is able to produce new antibodies it if encounters the same threat again.

Hensley told the newspaper that declining antibody levels after the infection has resolved “is the sign of a normal healthy immune response.”

Overall, researchers say it’s still too early to know definitively how long immunity to the novel coronavirus lasts. And more research is needed to understand the risk of reinfection.

Regardless, researchers in the British study stressed the importance of protective measures to help further prevent the spread of COVID-19.

“If someone tests positive for antibodies, they still need to follow national guidelines including social distancing measures, getting a swab test if they have symptoms and wearing face coverings where required,“ Elliott said in a statement.