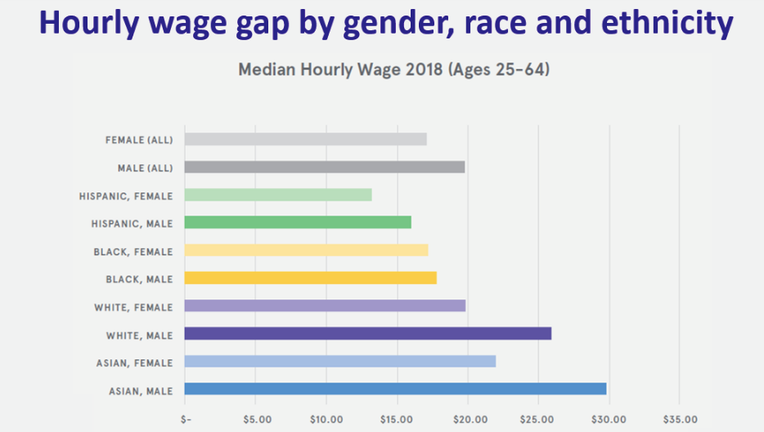 DALLAS - The demographic of a typical Texas woman is a 36-year-old woman of color making $35,000 a year or less. In a webinar Tuesday, the Texas Women’s Foundation covered their new economic report about issues women in Texas are facing in 2020.

The findings from the foundation detailed fours building blocks for a woman to achieve economic security -- education, child care, health insurance and housing -- and looked at how gender and race and ethnicity played a role in female success and disparities in these categories.

Texas Women’s Foundation Chief Operating Officer Dena Jackson pointed out a key finding that women are the face of poverty in Texas with a majority of them being Hispanic and black.

At the same time, the gender wage gap in Texas has not changed over the past decade and full-time infant care in Texas is almost as expensive as college.

“Childcare is affordable if it costs no more than seven percent of income but only 16% of people can afford it,” Jackson said.

The study also found that Texas women are negatively impacted by health policy. According to the study women in Texas are twice as likely to be uninsured compared with other women across the country and for women of color the rank of uninsured women is even higher.

“That would be the worst,” said Jackson during the webinar.

Jackson said policy change is needed to fix these issues.

“That’s both legislative policy as it is business policy,” she said. “Things like stronger equal pay for equal work rules, family medical leave and paid time off really allows for women and the entire family to be stronger.”

Jackson said even though the data is from before the pandemic the impacts from the virus exacerbated the problems. Women who are already disproportionally affected have felt the economic impact of the COVID-19 the most.

“We cannot successfully reopen unless we have families that are able to find child care and are able to have safe homes that they know they can go back too,” she said.

Jackson said that families and women who are on the cusp will continue to struggle. She believes the information in the report is a good foundation for people to find ways to help.

“When we think about COVID-19 and current events this is a lenses so this gives people a way to look at what was the baseline,” said Jackson. “Then that allows the local citizen to say, ‘Okay let me put that in context of what was already going on’.”

The full report and more resources can be found on the Texas Women’s Foundation website.