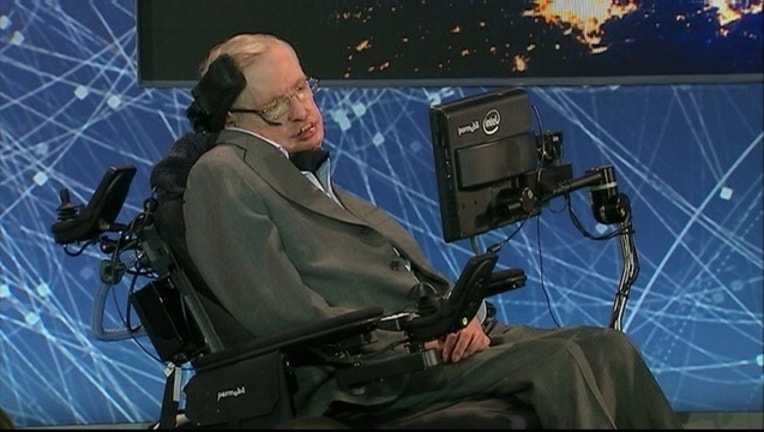 NEW YORK (AP) — With famed physicist Stephen Hawking at his side, an Internet investor announced Tuesday that he's spending $100 million on a futuristic plan to explore far outside our solar system.

Yuri Milner said the eventual goal is sending hundreds or thousands of tiny spacecraft, each weighing far less than an ounce, to the Alpha Centauri star system. That's more than 2,000 times as far as any spacecraft has gone so far.

Propelled by energy from a powerful array of Earth-based lasers, the spacecraft would fly at about one-fifth the speed of light. They could reach Alpha Centauri in 20 years, where they could make observations and send the results back to Earth.

They might discover a planet or planets there — experts think there may be some, but there's no proven sighting yet — and possibly even find signs of life there or elsewhere, said Milner and a panel of experts at the announcement. The three stars that make up Alpha Centauri are the closest stars to our star — the sun.

"We commit to the next great leap into the cosmos," Hawking said, "because we are human and our nature is to fly."

Hawking has joined Milner and Facebook founder Mark Zuckerberg on the board of the project, called Breakthrough Starshot, which includes a team of scientists. Milner said his $100 million will go to establish the feasibility of the project, and that a launch itself would require far more money.

Hawking is also part of a project Milner announced last summer to use earthbound telescopes to seek intelligent life in outer space.

For the Starshot project, the tiny spacecraft would be boosted into space by a conventional rocket, and then set free individually. They would capture the energy from the earthbound laser array with sails a few yards wide. Milner said recent advances in electronic miniaturization, laser technology and fabrication of extremely thin and light materials have made such a mission realistic to consider.

"We can do more than gaze at the stars," Milner said. "We can actually reach them."

Avi Loeb, chair of Harvard's astronomy department and member of the Starshot project's management and advisory committee, told reporters that scientists have scrutinized the technical obstacles and "we don't see any showstoppers.... We think we can overcome all these challenges."

Hawking, of Cambridge University, said the plan fits in with what he said makes humans unique, which is transcending limits.

"With light beams, light sails and the lightest spacecraft ever built, we can launch a mission to Alpha Centauri within a generation," Hawking said.

The project was announced on the 55th anniversary of the flight of Russian Yuri Gagarin, the first human in space. Milner was named after him.

Lisa Kaltenegger, an astronomy professor at Cornell University, who is not involved in the project, said in an email, "I think it is inspiring on this date to plan our next journey to the stars."