Joe Rogan will not be taken off of Spotify after a video compilation of him repeatedly using a racial slur resurfaced last week. Daniel Ek, the company's chief executive officer, said they have had conversations with Rogan about the content of his podcast but do not believe "silencing Joe is the answer." Artists including Neil Young and Joni Mitchell have had their music taken off the platform because of Rogan's controversial podcast.

Spotify will not be "silencing" Joe Rogan after a video compilation of him repeatedly using the "n-word" surfaced this week, the company’s chief executive officer said.

"There are no words I can say to adequately convey how deeply sorry I am for the way The Joe Rogan Experience controversy continues to impact each of you," Spotify Technology SA Chief Executive Daniel Ek said in a memo sent to employees on Sunday. "I think it’s important you’re aware that we’ve had conversations with Joe and his team about some of the content in his show, including his history of using some racially insensitive language."

"Following these discussions and his own reflections, he chose to remove a number of episodes from Spotify. He also issued his own apology over the weekend," he added, according to the statement obtained by Fox Business. "While I strongly condemn what Joe has said and I agree with his decision to remove past episodes from our platform, I realize some will want more. And I want to make one point very clear – I do not believe that silencing Joe is the answer."

The statement comes as many people are calling on the platform to censor the former "Fear Factor" host’s podcast, "The Joe Rogan Experience," over the now-viral video. Those who have previously been critical of Rogan’s vaccination comments also piled on to the criticism.

"Another criticism that I continue to hear from many of you is that it’s not just about The Joe Rogan Experience on Spotify; it comes down to our direct relationship with him. In last week's Town Hall, I outlined to you that we are not the publisher of JRE. But perception due to our exclusive license implies otherwise. So I’ve been wrestling with how this perception squares with our values," the CEO continued, Axios reported. 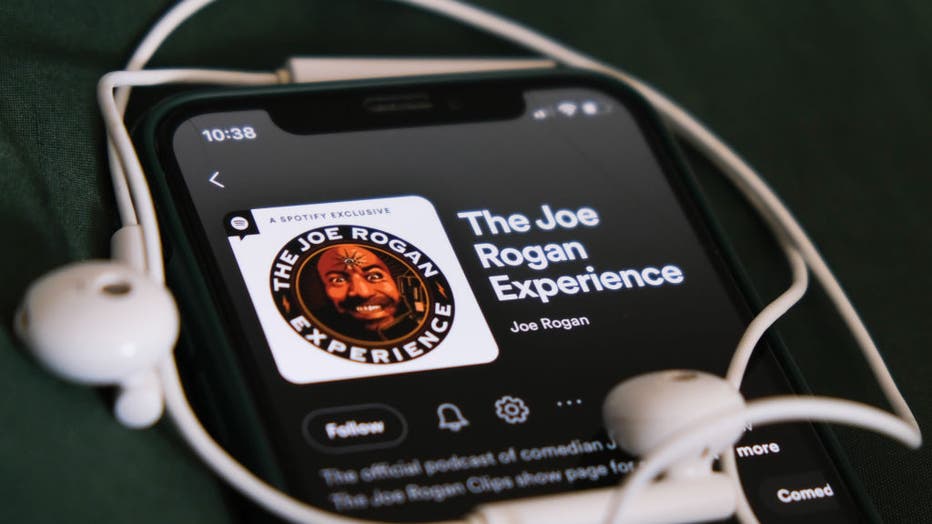 FILE - The Joe Rogan Experience podcast on Spotify displayed on a phone screen and headphones are seen in this illustration photo taken in Krakow, Poland on Feb. 3, 2022. (Photo Illustration by Jakub Porzycki/NurPhoto via Getty Images)

Rogan took to Instagram Friday evening where he issued his own apology, expressing his "deepest, sincerest" apologies. He also called his comments "regretful and shameful."

"I'm making this video to talk about the most regretful and shameful thing that I've ever had to talk about publicly. There's a video that's out that's a compilation of me saying the N-word. It's a video that's made of clips taken out of context of me of 12 years of conversations on my podcast, and it's all smushed together. And it looks f---ing horrible, even to me," the host added.