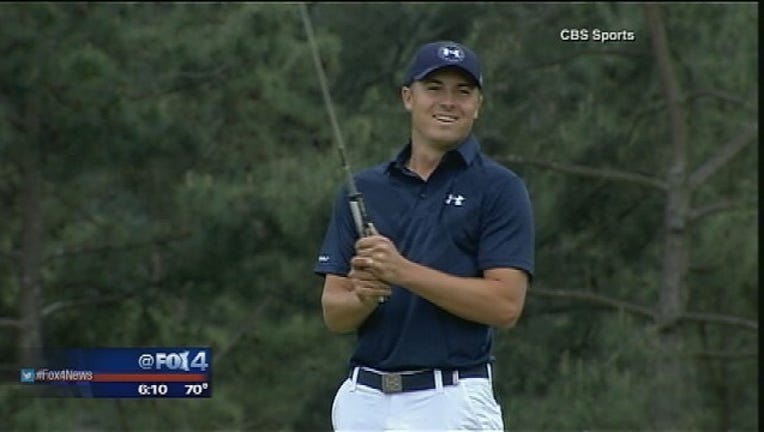 For a place dripping with centuries of history, St. Andrews got more than it could have wanted Sunday.

Jordan Spieth punched his golf bag in frustration after a careless bogey, perhaps sensing the British Open was slipping away. Just like that, and because this is what Spieth does in big moments, he salvaged his bid for a Grand Slam. He made three straight birdies. He took 10 putts on the inward nine. And when he walked off the 18th green, he had a 6-under 66 and was one shot behind with one round left.

"I'm going to play to win," Spieth said. "I'm not playing for a place. I don't want to place third tomorrow. I want to win."

But if there is history in the making at the home of golf, it no longer has to come from just Spieth.

Fans who filled the two-story grandstand and watched from the tops of buildings on Golf Place witnessed a moment not seen at St. Andrews in 88 years -- an amateur in the lead going into the final round of the British Open.

Paul Dunne, the 22-year-old from Ireland, rolled in putts like this was the prestigious St. Andrews Links Trophy for amateurs instead of the oldest championship in golf. He played bogey-free for a 66 and shared the lead with former Open champion Louis Oosthuizen and Jason Day.

Can it happen again?

"It's surreal I'm leading the Open, but I can easily believe that I shot the three scores that I shot," Dunne said. "If we were playing an amateur event here, I wouldn't be too surprised by the scores I shot. It's just lucky that it happens to be in the biggest event in the world.

"Hopefully, I can do it again tomorrow," he said. "But whether I do or not, I'll survive either way."

The way the weather-delayed Open ended on Sunday, expect just about anything.

Oosthuizen, the last player to lift the claret jug at St. Andrews in 2010 and a runner-up at the U.S. Open last month, birdied three of his last five holes for a 67. Day is just as big of a threat. He shot 67 and shared the lead for the second straight major, and he has challenged in four of them since 2011.

They were at 12-under 214, one shot ahead of Spieth with plenty of others that cannot be dismissed Fourteen players were separated by three shots. Half of them were major champions, and there was yet another amateur among them -- 21-year-old Jordan Niebrugge of Oklahoma State.

Such an opportunity might not come around again for Spieth. Only three other players won the first two legs of the Grand Slam since the modern version began in 1960. Arnold Palmer, Jack Nicklaus and Tiger Woods only got one shot at it, and none ever started the final round of the British Open so close to the lead.

And so it was Spieth, a 21-year-old Texan with an uncanny sense of occasion, who brought the gray, old town to life in a mixture of sunshine and rain. He rolled in birdie putts on the 10th, 11th and 12th holes to share the lead. He saved par from the high grass on the 13th, stuffed his approach to 4 feet for birdie on the 15th and made another tough par save on the Road Hole at the 17th.

A victory would send him to the PGA Championship with a shot at the Grand Slam, and at worse put him in elite company. Ben Hogan in 1953 is the only other player to capture the Masters, U.S. Open and British Open in the same year.

"Only one person has ever done it before. That opportunity very rarely comes around," Spieth said. "And I'd like to have a chance to do something nobody has ever done. ... To be able to go into the last major and accomplish something that's never been done in our sport is something that only comes around to a couple people ever. And I'd like to be one of those people to have that happen."

Rarely has the Old Course been as easy as it was Sunday.

One day after raging wind off the Eden Estuary caused a 10-hour delay and forced a Monday finish, the flags were soaked from passing showers and limp from no wind. The leaderboards were loaded with birdies, and seven players had at least a share of the lead at some point in the third round.

That's what made Dustin Johnson's collapse so shocking. With a one-shot lead after powering his way around St. Andrews for 36 holes, he was the last player in the field to make a birdie Sunday, and that wasn't until the 15th hole. He followed with three straight bogeys for a 75 to fall five shots behind.

Spieth, the youngest professional in the field, seemed calm despite the historic moment in front of him.

His goal at the start of the week was to treat the British Open like any other tournament he was trying to win. Even during the long delay on Saturday, he said he hasn't thought much about the slam. There is no escaping it now, and Spieth doesn't see that as a problem.

"If I have a chance coming down the stretch, if it creeps in, I'll embrace it," he said. "I'll embrace the opportunity that presents itself. As far as handling it, I don't look at it as a negative thing. I look at it almost as an advantage. Why should it add more pressure in a negative way?"