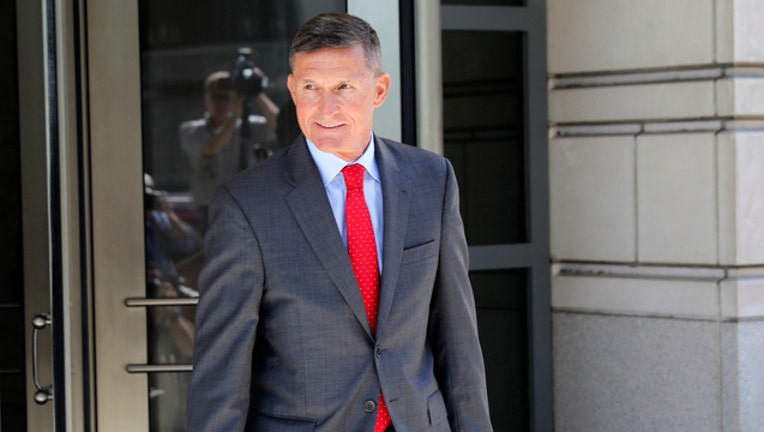 WASHINGTON (AP) -- President Donald Trump's former national security adviser provided so much information to the special counsel's Russia investigation that prosecutors say he shouldn't do any prison time, according to a court filing Tuesday that describes Michael Flynn's cooperation as "substantial."

The filing by special counsel Robert Mueller provides the first details of Flynn's assistance in the Russia investigation, including that he participated in 19 interviews with prosecutors. It was filed two weeks ahead of Flynn's sentencing and just over a year after he pleaded guilty to lying to the FBI about conversations with the Russian ambassador on Trump's behalf.

Though prosecutors withheld specific details of Flynn's cooperation because of ongoing investigations, their filing nonetheless underscores the breadth of how much information Mueller has obtained from people close to Trump as the president increasingly vents his anger at the probe -- and those who cooperate with it.

This week, Trump lashed out at his former legal fixer, Michael Cohen, saying he is making up "stories" to get a reduced prison sentence after his latest guilty plea to lying to Congress. Trump also praised longtime confidante Roger Stone for saying he would "never testify against Trump," adding in his tweet: "Nice to know some people still have `guts!"'

It's unclear if Trump will now turn his fury on Flynn, a retired U.S. Army lieutenant general whom Trump grew close to during the 2016 campaign and tried to protect by asking former FBI Director James Comey to let the investigation go. That episode is among those under scrutiny by Mueller as he probes whether Trump attempted to obstruct the Russia investigation.

Federal sentencing guidelines recommend between zero and six months in prison for Flynn, leaving open the possibility of probation.

Flynn's case has been a contrast to those of other Trump associates, who have aggressively criticized and tried to undermine the Russia probe. Most notably, Trump's former campaign chairman, Paul Manafort, aggressively fought the investigation and is now facing the possibility of a lengthy prison sentence after his cooperation agreement recently fell apart over allegations that he had lied to investigators. Stone has also waged a public campaign against Mueller.

But Flynn has largely remained out of the public eye, appearing only a handful of times in media interviews or campaign events, and he has strictly avoided criticizing the Mueller probe despite widespread encouragement from his supporters to go on the offensive. He has instead spent considerable time with his family and worked to position himself for a post-conviction career.

Flynn's false statements stemmed from a Jan. 24, 2017, interview with the FBI about his and others' interactions with Sergey Kislyak, Russia's then-ambassador to the U.S., as the Obama administration was levying sanctions on the Kremlin in response to election interference.

As part of his plea deal, Flynn said members of Trump's inner circle, including his son-in-law and White House aide Jared Kushner, were involved in -- and at times directing -- his actions in the weeks before Trump took office.

According to court papers, in mid-December 2016, Kushner directed Flynn to reach out to several countries, including Russia, about a U.N. Security Council resolution regarding Israeli settlements. During those conversations with Kislyak, Flynn asked Russia to delay or vote against the resolution, a request the Kremlin ultimately rejected.

Flynn also admitted that later in December 2016 he asked Kislyak not to retaliate in response to the Obama administration sanctions, something he initially told FBI agents he didn't do. Flynn made the request after discussing it with deputy national security adviser K.T. McFarland, who was at Trump's Mar-a-Lago resort, and being told that Trump's transition team did not want Russia to escalate the situation.

Flynn was forced to resign his post on Feb. 13, 2017, after news reports revealed that Obama administration officials had warned the Trump White House about Flynn's false statements. The White House has said Flynn misled officials-- including Vice President Mike Pence -- about the content of his conversations.

Flynn also admitted to making false statements about unregistered foreign agent work he performed for the benefit of the Turkish government. Flynn was under investigation by the Justice Department for the work when he became national security adviser.