Did you recently get a spam text... from yourself? You’re not alone. Verizon formally acknowledged the issue and says its team and U.S. law enforcement are investigating. (Credit: KTTV FOX TV Stations)

No, that text you just received from yourself is not the future you letting you know what stocks to invest in to become a millionaire. It’s spam and it appears to be impacting Verizon customers.

Many Verizon customers have reported the spam messages in recent days, with the company formally acknowledging the issue Tuesday. Verizon blamed "bad actors" as the source of the spam texts.

The company said it’s actively working to block the messages and have even involved U.S. law enforcement to identify and hopefully stop whoever or whatever is sending out the spam texts.

"Verizon is aware that bad actors are sending spam text messages to some customers which appear to come from the customers' own number. Our team is actively working to block these messages, and we have engaged with U.S. law enforcement to identify and stop the source of this fraudulent activity. Verizon continues to work on behalf of our customers to prevent spam texts and related activity," a company spokesperson told FOX TV Stations in an email. 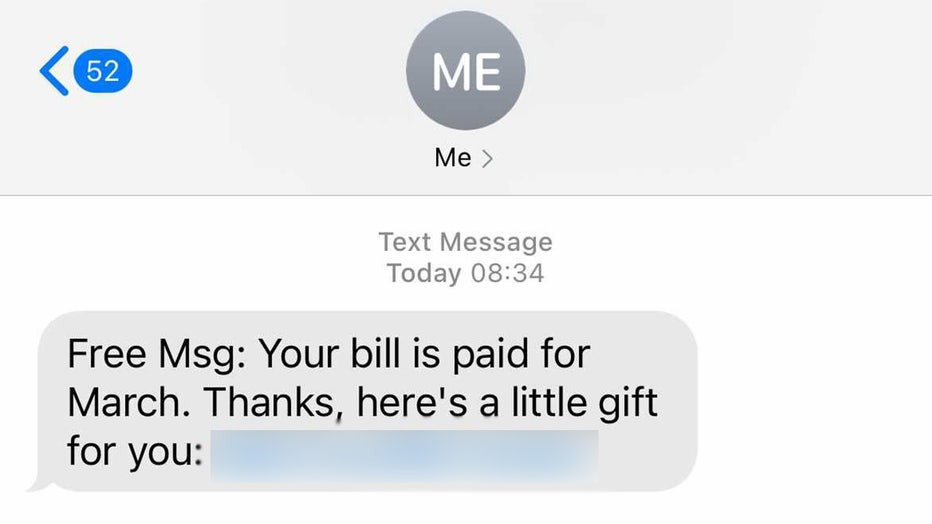 The spam messages look like a text from themselves that reads: "Free Msg: Your bill is paid for March. Thanks, here’s a little gift for you," followed by a URL link.

If you did receive this text, first things first - do not click on the link. Now that you’ve avoided that, Verizon has asked customers to forward the text to SPAM (7726) and write "spoofed number."

Verizon assured customers that forwarding the text to their spam team would not flag or block their numbers.

Customers can also simply delete the text or tweet at Verizon Support and will be directed to DM the account to address the issue further.

Separately, this past February, the U.S. Federal Communications Commission (FCC) announced a new plan to protect Americans from unwanted robocalls left on the voicemails of their phones.

FCC Chairwoman Jessica Rosenworcel introduced the proposal which would require callers to obtain a person’s consent before they can leave a direct message in their phone’s voicemail, expanding the scope of the Telephone Consumer Protection Act (TCPA).

The TCPA protects consumers from unwanted robocalls and prohibits callers from making any non-emergency call using an automatic telephone dialing system or a prerecorded voice to a cell phone number without the consent of the person contacted, according to a release from the FCC.

"Ringless voicemail can be annoying, invasive, and can lead to fraud like other robocalls—so it should face the same consumer protection rules," Rosenworcel said in a statement. "No one wants to wade through voicemail spam, or miss important messages because their mailbox is full. This FCC action would continue to empower consumers to choose which parties they give permission to contact them."

The agency did not state when they plan to hold a full commission vote on the proposal.

Daniel Miller contributed to this report. This story was reported out of Los Angeles.