The investigation into the apartment building explosion in Silver Spring, Maryland took a turn today as the County fire chief confirmed investigators are now pulling rubble by hand, operating as if there is a body under the rubble.

SILVER SPRING, Md. - Authorities say all known residents have been contacted and accounted for as investigators and search crews resume operations at a Silver Spring apartment complex the morning after an explosion and fire left over a dozen injured.

Authorities say all known residents have been contacted and accounted for as investigators and search crews resume operations the morning after an explosion and fire at a Silver Spring apartment building left over a dozen injured.

Montgomery County Fire Chief Scott Goldstein said crews are still working to confirm that there were no visitors in the buildings at the time of the explosion. Goldstein said 14 people suffered injuries in the blast -- three with serious injuries and 11 with minor injuries. Goldstein said one of the injured left the scene and went to work before calling 911.

During a 3 p.m. press conference, the fire chief provided several updates. He confirmed another K9 hit. "We hope that we’re dealing with clothing or other items that would be giving the dog hits." he said.

Until then, they are removing rubble by hand, and operating as if there is a body inside. 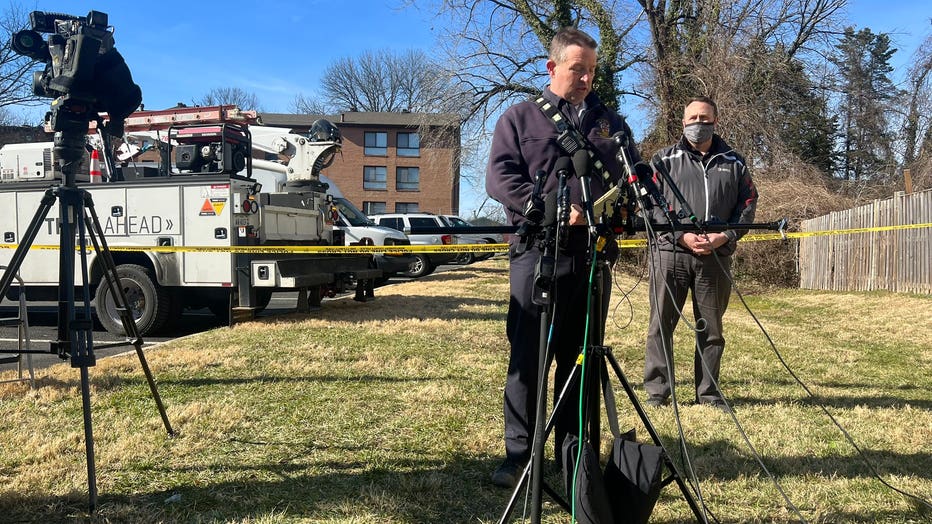 Goldstein confirmed all residents inside building 2405 have been accounted for. He also confirmed there are no mercury regulators in the building.

Goldstein said that while all residents were accounted for, the department is still working to confirm that there were no visitors in the building during the time of the explosion.

The county fire chief confirmed a cut gas pipe was discovered in the basement of the building that exploded.  Goldstein said the property maintenance worker was doing plumbing work in the building before the explosion. Goldstein said investigators are speaking with the worker to see if the maintenance that was being performed may have led to the explosion. At this time, no cause has been determined.

Investigators and search crews have resumed operations Friday morning a day after an explosion and fire at a Silver Spring apartment building sent 10 people to the hospital and left several others unaccounted for.

Goldstein said approximately 225 residents of all six buildings in the complex have been displaced from their homes at this time.

He said the residents from the original three buildings – buildings 2405, 2401 and 2411 – were displaced immediately following the explosion. A lot of residents complained to FOX 5 that Friendly Garden’s maintenance team did properly respond to issues. Multiple residents told FOX 5 they smelled gas before the explosion.

Many of the displaced residents are concerned the complex was not properly inspected and believe the explosion is connected to a lack of oversight.

"I have nothing. I’m cold. Look, this [is] all I have. I have nothing. Everything [is] gone," said Lucy Johnson, as she began to cry. Johnson showed FOX 5 the fleece-style jacket, thin white pants and flip-flops she wore, saying that’s all she now owns.

Everything else, including Johnson’s medications and belongings, were lost in the building that exploded. Johnson and several other residents were frustrated that the Red Cross would not provide hotels and instead set up a shelter at the White Oak Recreation Center for the over 200 residents displaced. Johnson told FOX 5 she has severe asthma and is very concerned for her health, as we’re still in a pandemic.

On Monday is when the Red Cross confirmed it will begin the process of meeting with families to begin finding new apartment units. It’s not clear how long the relocation process could take. 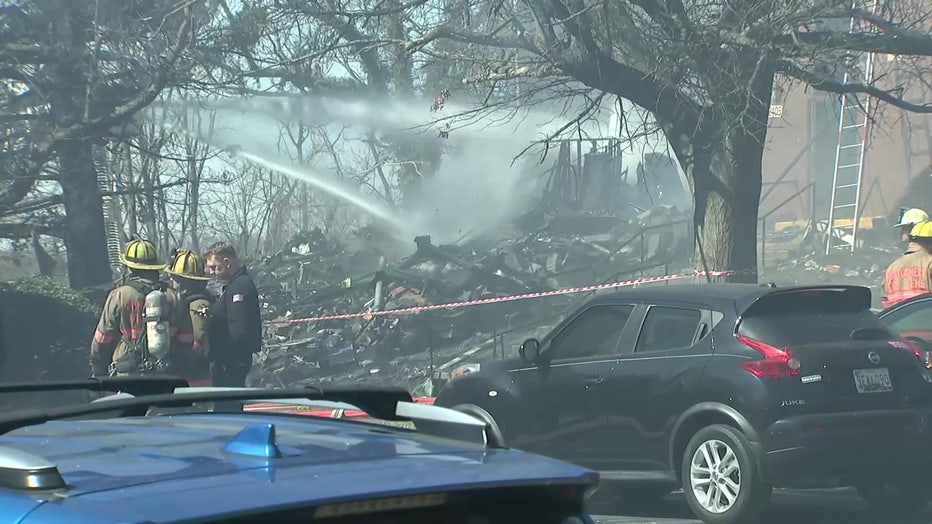 While only a few people stayed at the White Oak Community Center on Thursday, county officials confirmed around 220 residents from all six Friendly Garden buildings were displaced on Thursday.

The fire chief had hopes at least three buildings would  reopen Friday evening. A transformer damaged in the explosion had to be repaired so that the three remaining buildings could have power before anyone was allowed back inside.

Around 120 people either had everything destroyed in the explosion or lost access to needed items because their building was deemed unstable to re-enter.

Investigators and search and rescue crews are expected to work at the scene for the next several days.

Montgomery County Executive Marc Elrich said the apartment complex underwent a fire inspection on February 2, 2022 and received its tri-annual inspection in September 2021. "These buildings were inspected by both - for building code and for fire safety," Elrich said.

The disaster happened Thursday morning around 10:30 a.m. at the Friendly Garden Apartments on Lyttonsville Road.

A neighbor shot this video the moment an explosion occurred at a Silver Spring apartment building. (Courtesy Amrit Gautam)

A resident's security camera captured video of the moment the explosion tore through the apartment complex.

"It was reminiscent on the traumatic scene back then of this three-to-four-story apartment building that had just been leveled and collapsed," said Montgomery County Council Member Tom Hucker on Thursday.

In 2016, an explosion at the Flower Branch Apartments in Silver Spring killed seven people, including two children, and left many more injured. Officials say a failed mercury regulator was to blame. 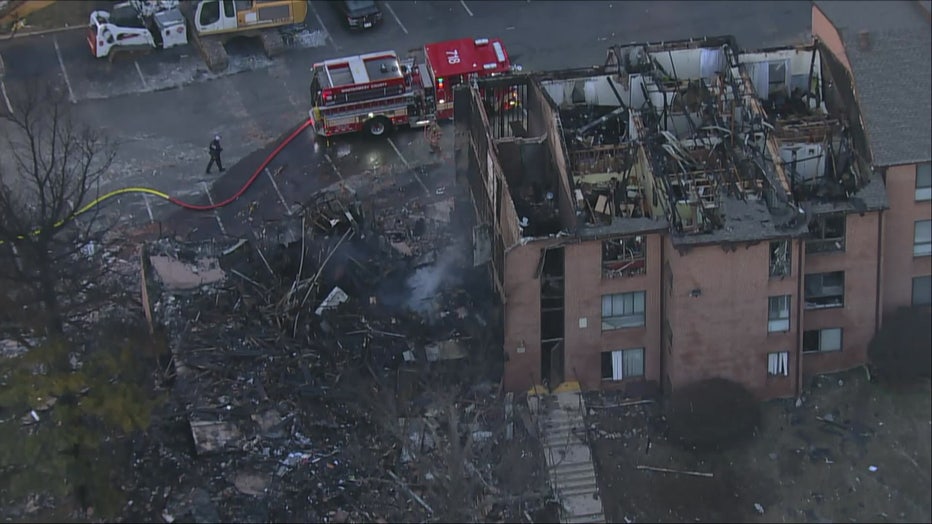 "It is certainly true that the Flower Branch explosion uncovered the fact that there are hundreds of mercury regulators in apartment buildings all across Montgomery County but also in Prince George's County and D.C.," said Hucker.

Following that explosion, two laws were put in place in Montgomery County. One would require landlords to report mercury regulators. The other would require problematic properties in the county to be inspected every one to three years. 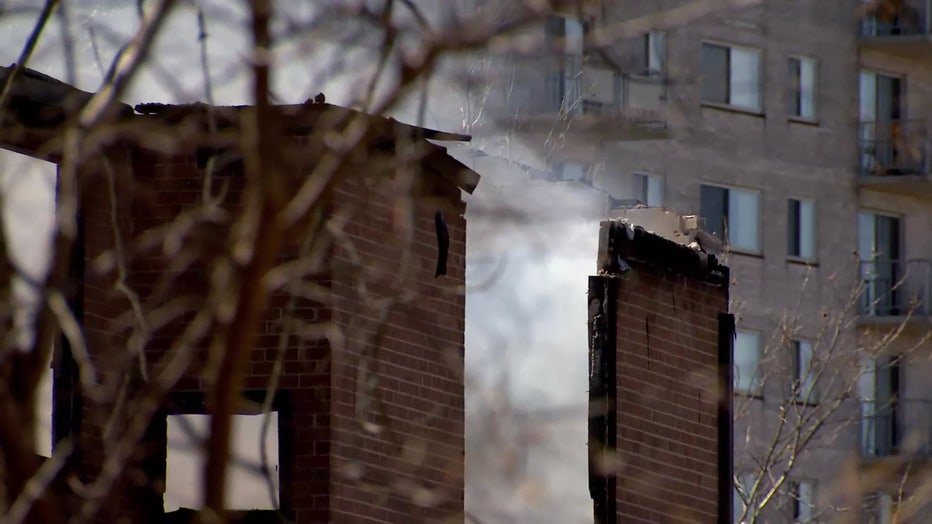 Authorities have yet to determine the origin or cause of the blast. A fund has been established to help the families displaced by the fire and explosion.

The Montgomery County Department of Health and Human Services is also helping out by providing mental health counselors, translators and missing medication.