Three people are dead, including the shooter, after a shooting at a church in Tarrant County Sunday morning.

WHITE SETTLEMENT, Texas - Three people are dead, including the shooter, after a shooting at a church in Tarrant County Sunday morning.

The shooting occurred just before 10:50 a.m., at West Freeway Church of Christ in White Settlement.

"He entered the church and sat down with parishioners. He got up from that position, pulled out a shotgun, and fired it," said White Settlement Police Chief JP  Bevering.

Authorities said two church members were killed by the gunman. One was in critical condition after being revived, but later died. The victims have not yet been identified.

In a livestream of the church service, the gunman can be seen getting up from a pew and talking to someone at the back of the church. He then pulled out a gun and opening fire.

"We lost two great men today, but it could have been a lot worse, and I am thankful our government has allowed us the opportunity to protect ourselves," said Britt Farmer, senior minister at West Freeway Church of Christ.

The shooter, who has not been identified, was killed after two members of the church's volunteer security team returned fire, according to investigators.

Investigators praised the quick work by the security team, as they said the shooting was over in six seconds. Lt. Gov. Dan Patrick said they were responsible for "saving untold number of lives."

An FBI official said it is still working to determine motive and is interviewing associates of the gunman, adding that the shooter is "relatively transient" but has roots in this area.

“Unfortunately, this country has seen so many of these, that we’ve actually gotten used to it,” DPS Regional Director Jeoff Williams said. “I would like to point out that we have a couple of heroic parishioners who stopped short of, just anything that you could even imagine, and saved countless lives.”

Authorities reiterated that there is no active threat to the community.

Two others received minor injuries, and were treated at the scene. 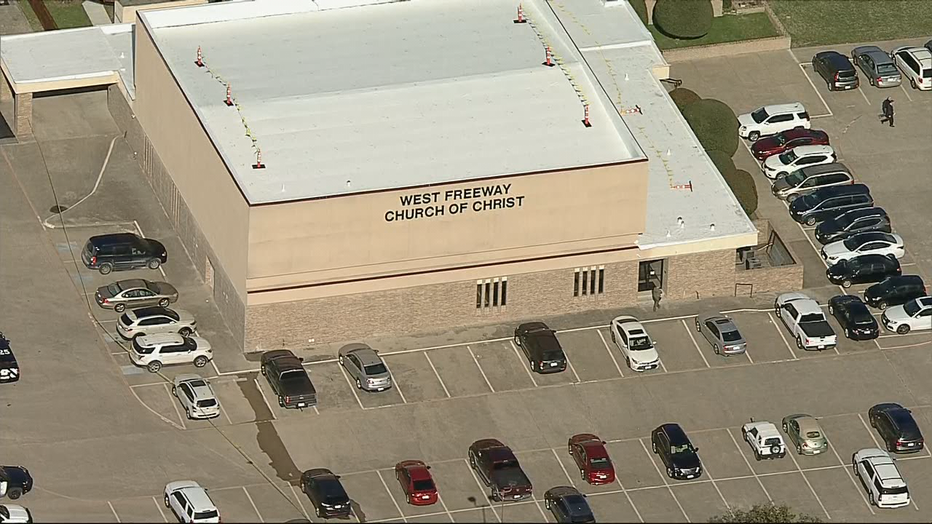 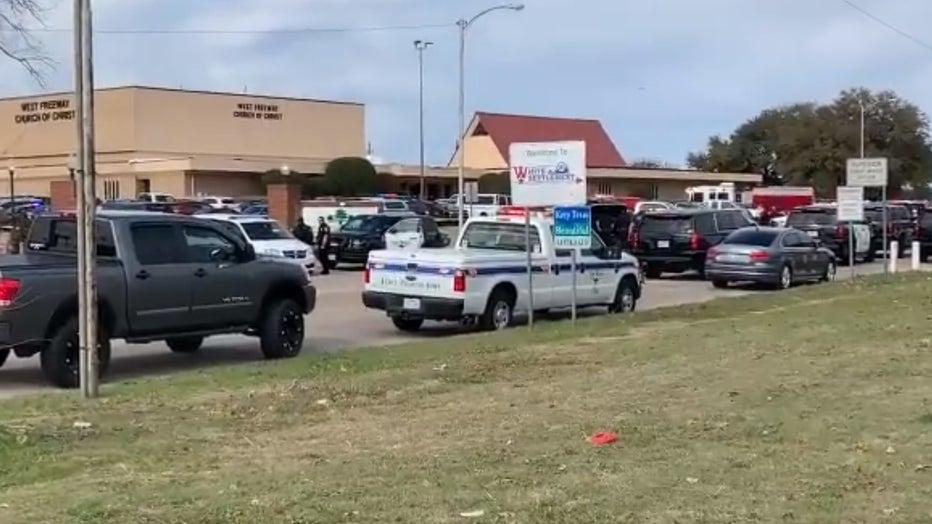 John and Diana Richardson embraced their daughter while leaving West Freeway Church of Christ after a the shooting during Sunday’s service.

“I think that all congregations should have some people there that can protect against certain incidents. That would be a lot better,” John Richardson said.

Security protected churchgoers and John protected his wife of 47 years. He said he jumped on top of her while she was in her wheelchair to shield her from the gunman.

Still, while his heart is with his church family, he’s also thinking of the other side.

“I don’t know what his mental state was, but my heart goes out to his family because they have to live with this,” he said.

Church members were kept inside the church by law enforcement for hours after the shooting while anxious family members waited on the outside.

“My family is very, very close to this church. They are family,” said Dannetta Maldonado, whose parents were inside the church at the time of the shooting.

Some members called loved ones by phone from inside the sanctuary.

“She was very frantic whenever I spoke with her on the phone,” said Tristan Stone, who had a family member inside. “You can never take any day for granted. You never know when these things are going to happen.”

“It’s hard for us to talk about because this is the church that we grew up in and it’s the people that we love that has been lost,” said Melanie Davis, who had family in the church.

Davis’ mother was sitting near the shooter.

“Her words were he seemed very suspicious to her,” Davis said.

Investigators are working to find out what everyone is asking, why?

The Richardson family is just grateful to security for taking out the shooter, and possibly preventing more deaths.

While leaving a faithful message towards everyone involved.

“We can’t have hate for these people. We can’t hate for anybody that does hate for us. We have to live that life of Christ who wants us to teach and preach and be his example of his on earth to every person we meet,” he added.

The ATF and FBI have responded to the scene to assist.

Texas Governor Greg Abbott tweeted a statement, saying, "Our hearts go out to the victims families of those killed in the evil act of violence..."

Texas Attorney General Ken Paxton tweeted about the shooting, asking for prayers for "any victims and their families, this congregation, and the law enforcement officials at the scene."