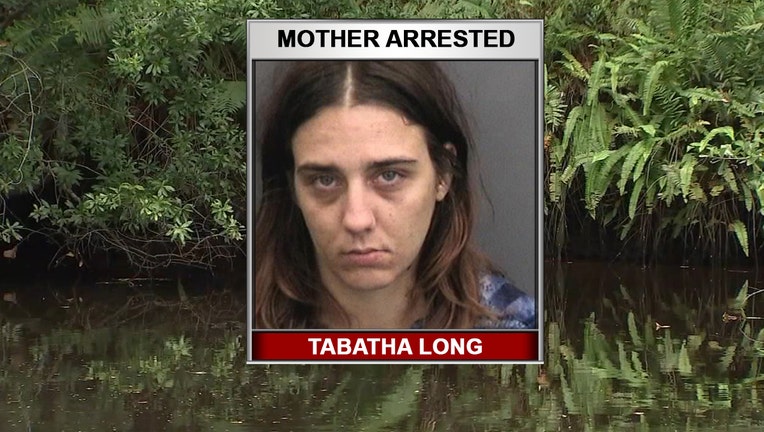 TAMPA, Fla. (FOX 13) - Nearly two months after the drowning death of 9-year-old Bentley Long, his mother has been accused of carrying him into the deep waters that took his life, the sheriff announced.

On Thursday morning, 28-year-old Tabatha Long was taken into custody and faces a charge of aggravated manslaughter of a child.

On the last day of July, dive teams with the Hillsborough County Sheriff's Office responded to Bullfrog Creek in Gibsonton after learning a boy went missing in the murky waters. Later, his body was pulled from the creek.

At the time, deputies were told that Tabatha and her brother went for a swim behind Whispering Waters Way, leaving her son on land. Deputies said Tabatha told them he eventually wandered into the water -- without her permission -- and didn't resurface.

It turned out that wasn't the case, said Sheriff Chad Chronister.

Chronister said Tabatha appeared to be heavily intoxicated that day and seemed too impaired to care for her child.

"We knew something wasn't right," he recalled during Thursday's press conference.

Chronister said Tabatha told deputies her son can swim, but was not a strong swimmer. It turned out that was a lie, he announced. Bentley cannot swim at all.

Through the investigation, deputies said they learned Tabatha entered Bullfrog Creek with her son on her back.

Eventually, the child slipped off her back. His uncle saw it happen and tried to recover Bentley, but it was too late.

"She never realized he fell off," Chronister said. “It was a deadly choice. A choice she made.”

He revealed that deputies tested her blood alcohol level following her son's drowning. Even several hours after the drowning occurred, they found her BAC was 0.07, and she had marijuana in her system, Chronister said.

"She chose to drink and get high over the safety of her child," he said, adding that witness testimony led to her eventual arrest.

He said she was visibly upset Thursday morning when deputies told her she was under arrest.

“He will never grow up to achieve his dreams," Chronister said. "All this was taken from him because of a decision his mother made that day – to party over taking care of her child.”